Wednesday was my fourth and final day covering Gettysburg 150 and it promised to be one for the books.  In the run up to the event the question on everyone's mind was in regard to how many people would show up for the Pickett's charge commemoration.  Estimates were as high as 15,000 people.  That event was foremost in the minds of the social media team especially on the morning of July 3rd.

But first things first - all will be revealed.

My first assignment of the day was coverage of the 10:30 East Cavalry Field hike.  The sky was very overcast and promised rain as I pulled into the site. 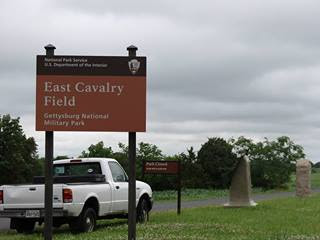 There was a circuitous and unexpected detour routing participants to the Michigan Cavalry Brigade monument through the back way.  When I was getting directions from the ranger I asked "Is the detour marked?"  to which she replied "yes, sort of".  I was to find out that sometimes "sort of" means the same thing as "no".

Nonetheless I found my way to the beginning point of the tour as people were already showing up just as it began to sprinkle, 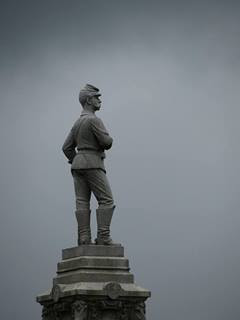 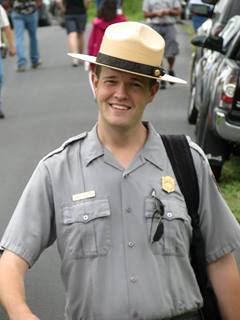 The ever jaunty Jared Frederick arrived early and ready to go.

Before the hike even began the rain started... 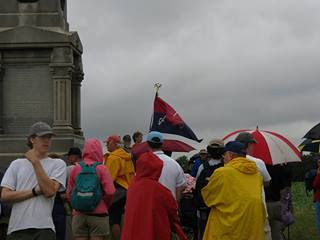 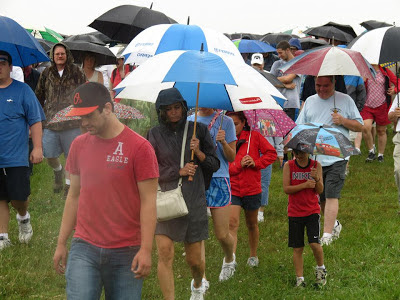 and a  canopy of umbrellas appeared. 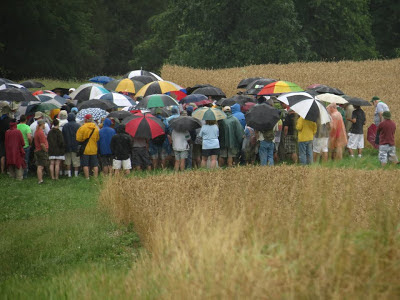 Undaunted, the hikers went on their way following Jared's great narrative of the Cavalry action
on the third day of the battle.

The rain did not bode well for the big event of the day - the Pickett's charge commemorative hike;  but the weather proved to be just as whimsical as it had been the previous two days and about two hours before the big event the sun came out, and it became very hot and very humid.

After returning to the office to upload the photos of Jared's hike I hopped back into my vehicle to make my way to the media parking area just across the street from the Mary Leister house, also known as Meade's headquarters. 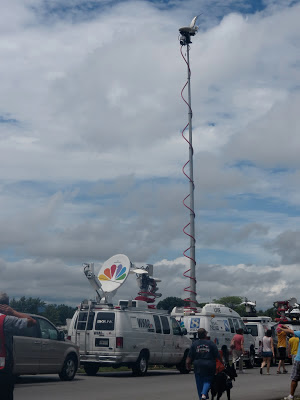 About a dozen media vans were in position from all the networks. 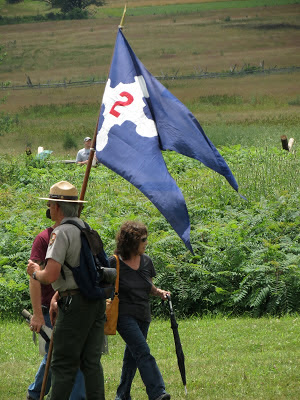 My assignment had me on Cemetery Ridge near the "high water mark" so I would be watching the approach of the Pickett's Charge hike as had the Union soldiers on July 3 1863 from the same position.

After hurrying from my truck to find the best position I went about twenty paces and felt as though I'd stepped into a furnace.  Man, was it hot!  I immediately shifted into "go slow" mode and found my self a shady and cool place to sit and wait as things developed.  From my shady perch I was able to chat with a variety of visitors including two gentlemen from Italy, attracted to me by my name tag "Gentile".

Parla italiano? he inquired.  Sadly, I had to respond in the negative.  Fortunately he spoke just enough english for us to have a very lively and funny conversation as we tried to tease out the meaning of what we were trying to say to each other.  We were both very entertained.

While this was going on the throngs started to arrive in earnest, including... 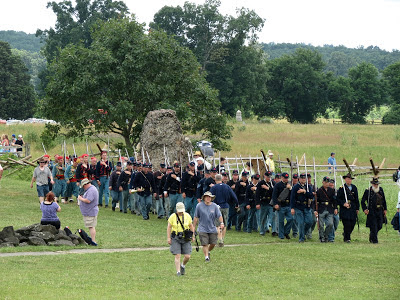 A  detachment of Union soldiers, including a corporal's guard of zouaves! 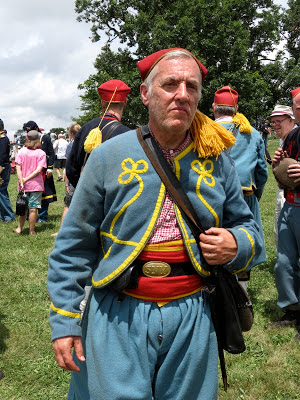 Zouave units were like any other volunteer regiment except that they patterned their uniforms after the French Algerian zouaves that were capturing the fancy of the martial sartorial crowd.  Visitors to Antietam frequently ask if zouaves didn't make better targets as they were more conspicuous in a crowd.  "No" is the reply, adding that no individual zouave will stand out in a regiment of 500-800 other zouaves.  Zouaves have cool uniforms and it was fun seeing reenactors bringing a splash of color to the event 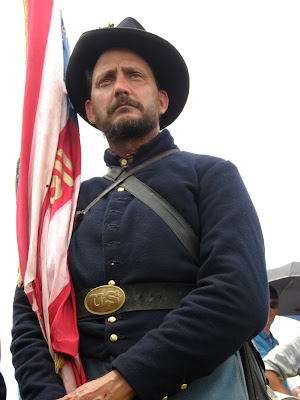 As the hikers on the opposite side began to form up it was apparent that my camera was unable to capture the sheer sweep and volume of the participants along seminary ridge.  For a better idea of the magnitude of this event and the huge number of people participating go here 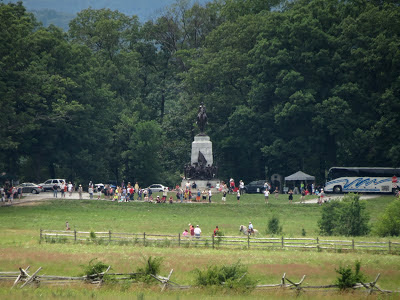 The fist of the hikers assemble at the Virginia monument.  This was captured with my zoom, they were nearly a mile from where I was standing 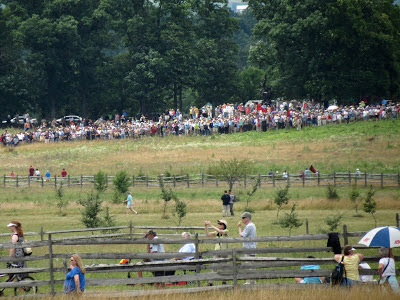 As I watched from my position one shuttle bus after another in a continuous stream of buses began unloading the hikers.  The crowd and the anticipation were building with each passing moment. 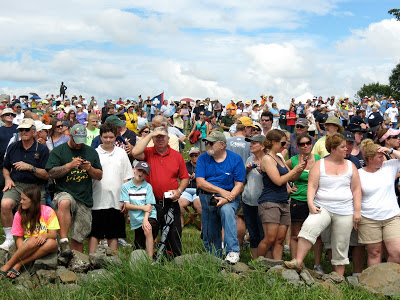 There were nearly as many spectators as there were hikers.  These visitors are near the "angle" of the Union position. 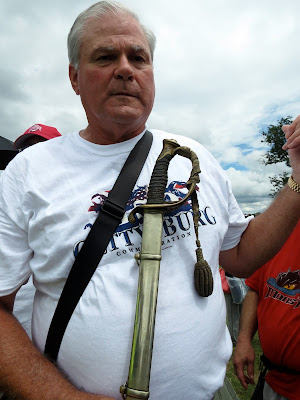 This  gentleman brought the sword carried by his ancestor on the very spot 150 years earlier,  The devotion, interest level, and emotional investment of the participants was really remarkable and was typical of the three-day event. 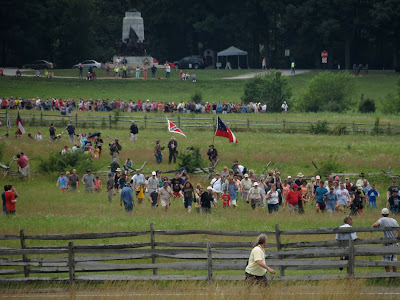 Right about 3:00 the Confederate brigades began their advance. 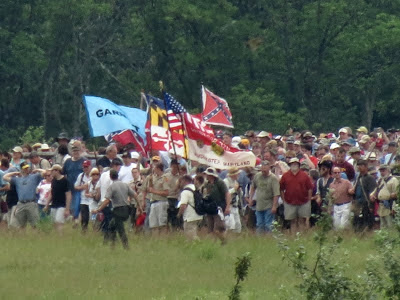 Participants were divided up into nine groups representing the nine Confederate brigades that comprised what has become know as "Pickett's Charge"  Each brigade carried a banner emblazoned with the name of its historic commander.  Two rangers and many volunteers were assigned to each brigade to keep the group organized and on time.  One can only imagine what a task this was. 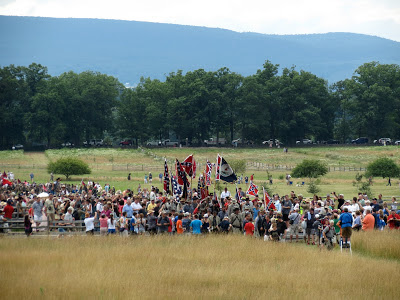 The march made its way to the Emmitsburg Pike, the fences of which were the cause of so much carnage during the battle, men were completely vulnerable as they climbed the fences, and much unit cohesion was, if only temporarily, lost. 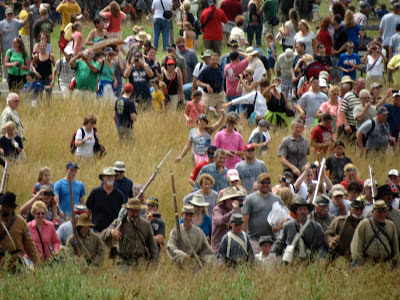 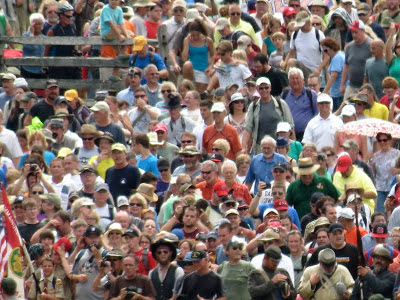 As it turned out, the projected number of 15,000 hikers was not an exaggeration! 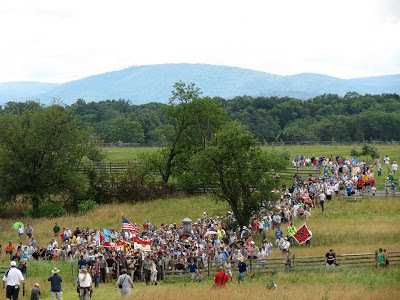 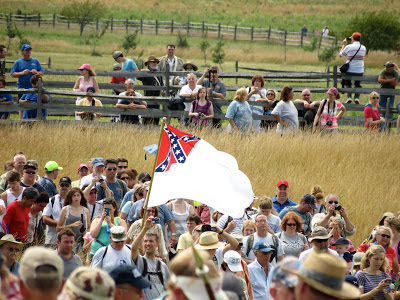 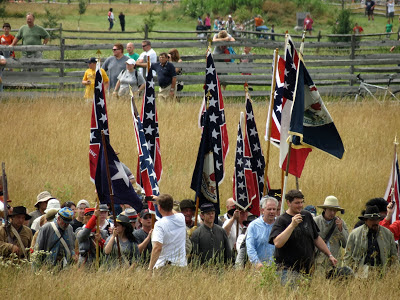 From my position I, and many others, remarked that small group with many, many Confederate flags was well in advance of the main body, in fact they had arrived at the angle before many of the hikers had barely stepped off at Seminary ridge.  Sadly, this was a renegade group of Confederate reenactors who decided to "go rogue" and do the charge their way.  It caused great confusion among hikers and spectators alike, and it was compounded by what has been characterized as their belligerent "hooping and hollering" during the very somber playing of "echo taps" at the end of the event.  It was one, small, sour note in an otherwise remarkably successful and moving event.

Now back to our story 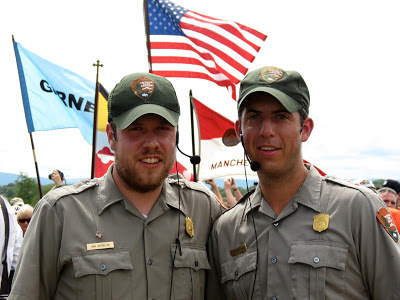 As rangers Dan Vermilya and Chris Gwinn led Garnett's brigade they were cheered on... 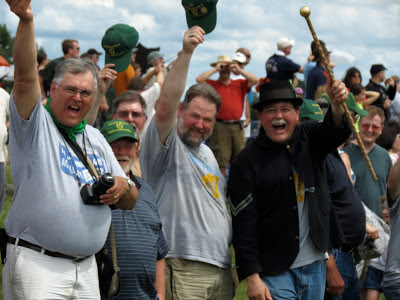 by spectators on Cemetery Ridge. 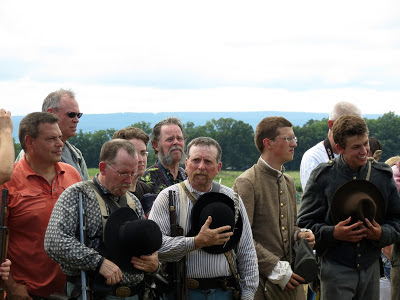 When it was all over there was a moment of solemnity with the playing of "echo taps" performed by a dozen buglers strung out all along the Union line. 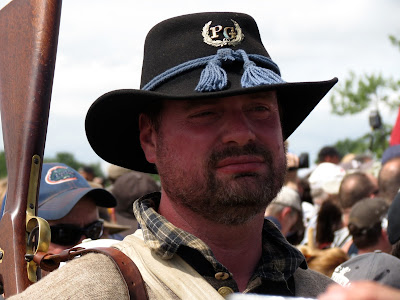 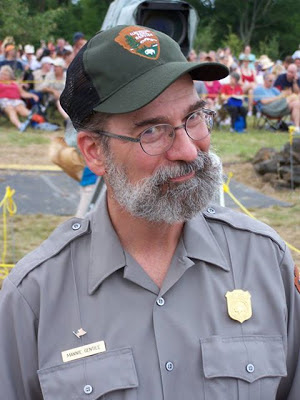 and for this, one very lucky, Park Ranger.

What a week!  Thanks for coming along.

Congratulations to the staff and volunteers of Gettysburg National Military Park for making this showcase event of the Civil War sesquicentennial such a successful, meaningful, and memorable event.

Posted by Mannie Gentile at 7:31 PM