Last week I spent one day at the new WWII Memorial.  Although the day started out sunny and balmy, by the end of the day I was wet and cold from the rain.  Such is the life of a park ranger.  I really enjoyed the day and here follows some photos and my impressions of the day. 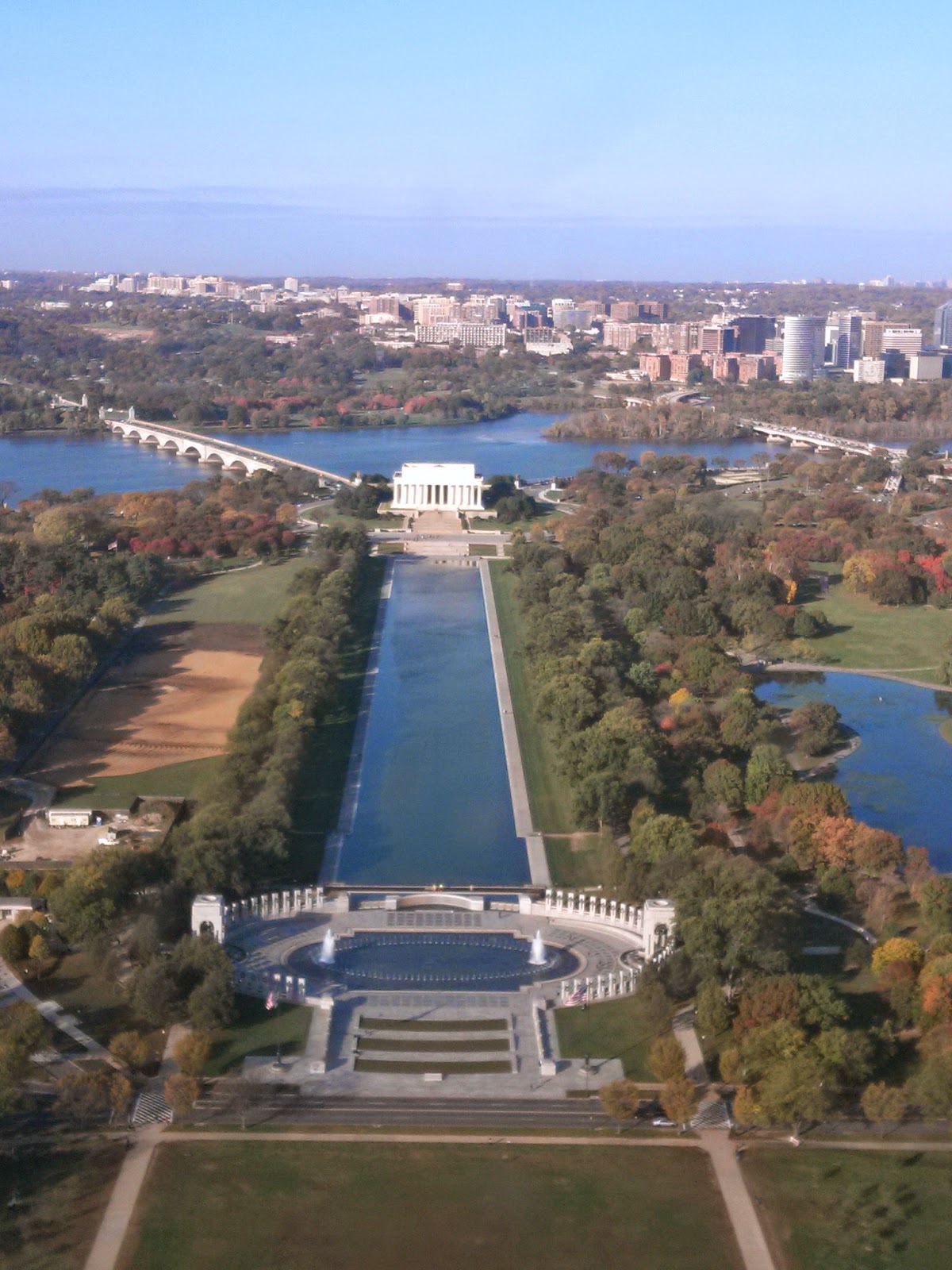 The Memorial is at the opposite end of the reflecting pool from the Lincoln Memorial. 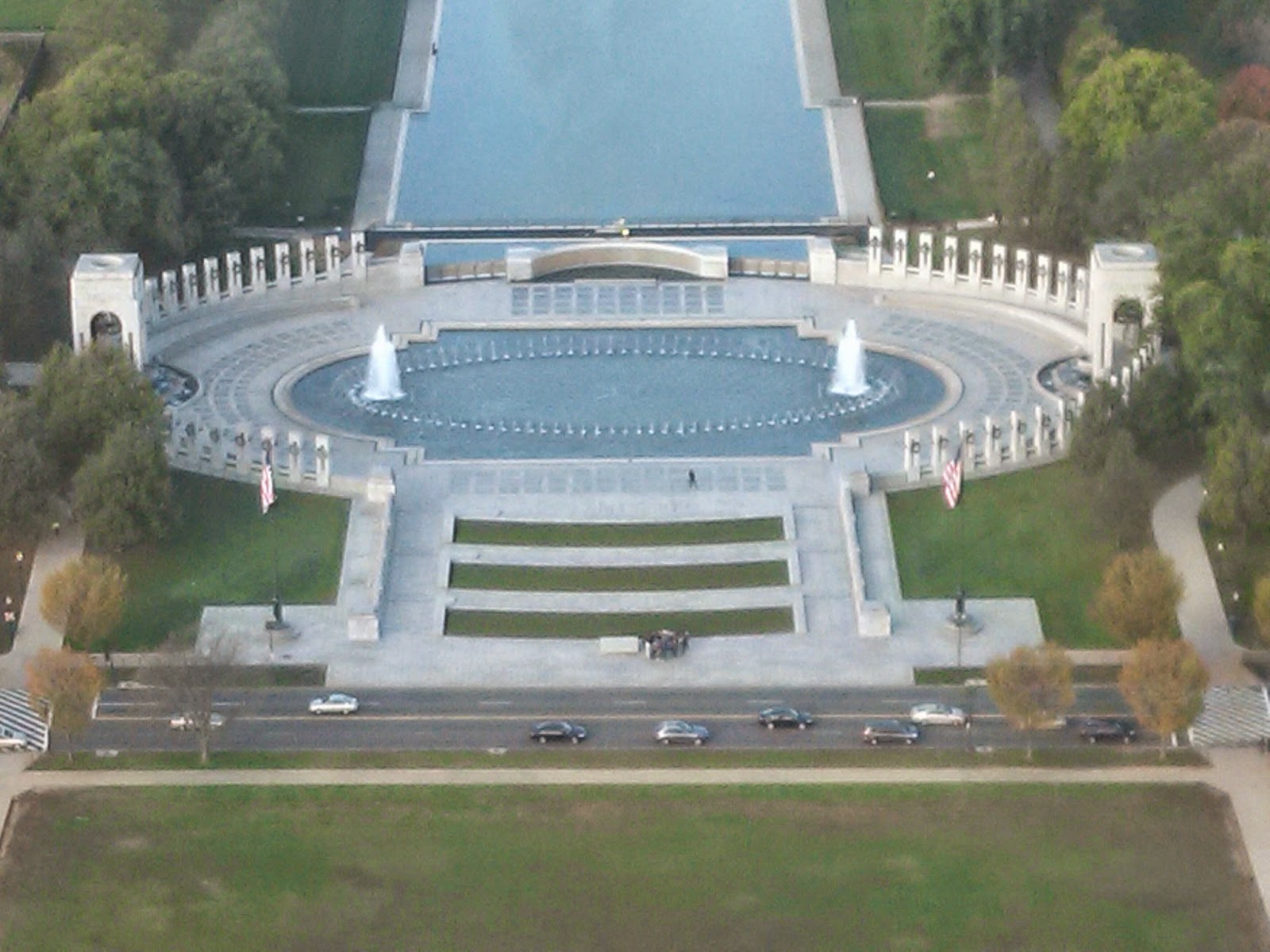 The preexisting Rainbow Pool was incorporated into the design of the Memorial.  Also the Memorial was designed in a manner so as to not obscure the line-of-sight from the Lincoln Memorial to the Washington Monument.
The Monument was dedicated on May 29 (my birthday) 2004. 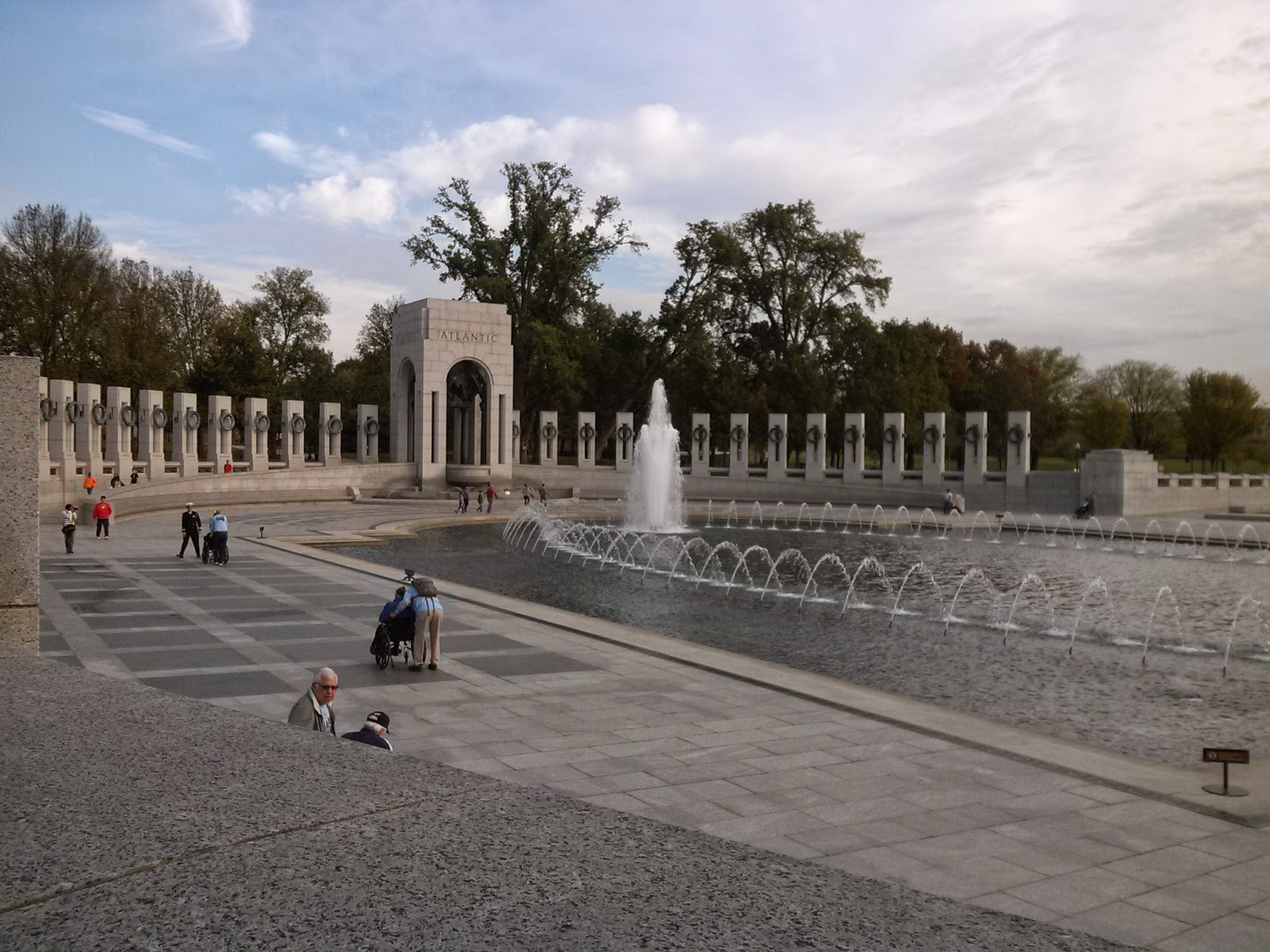 There are numerous water features to the Memorial. which I like a lot. Moving water adds animation to any space. also its a very nice white-noise generator to block out the ever present noise of jet airplanes, helicopters, and sirens. 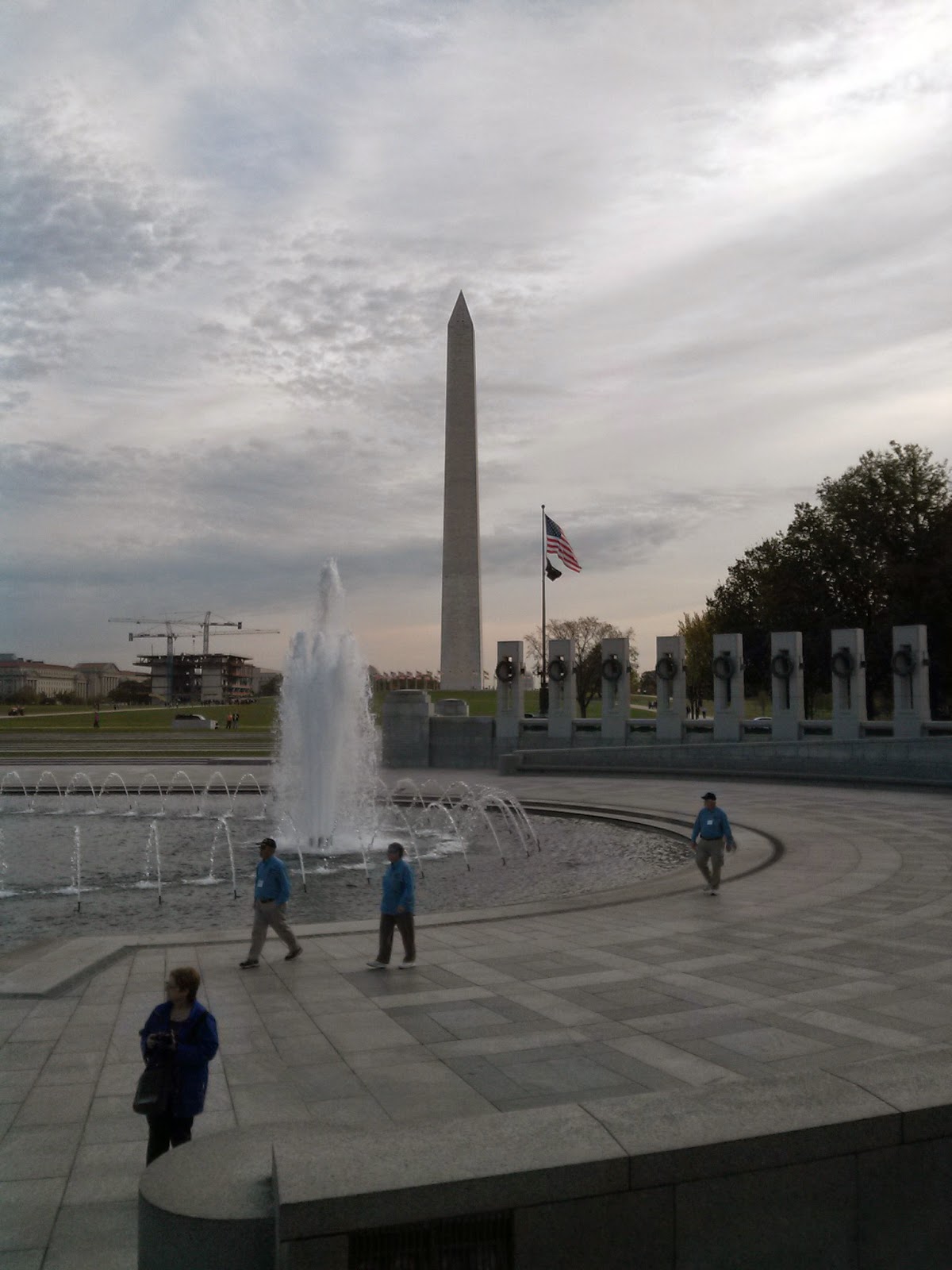 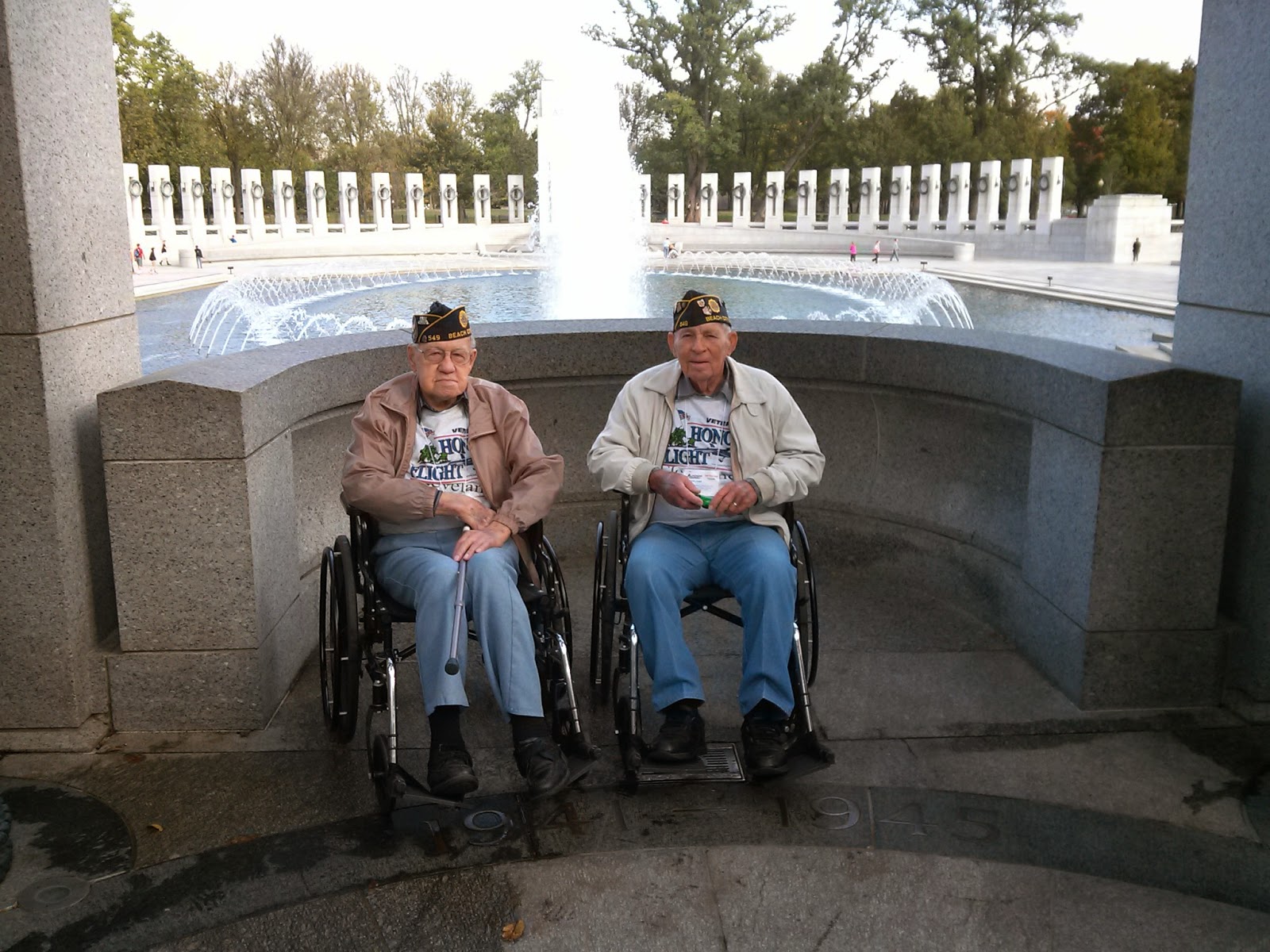 Among the visitors are always numerous veterans including those from the
"Greatest Generation" of WWII. 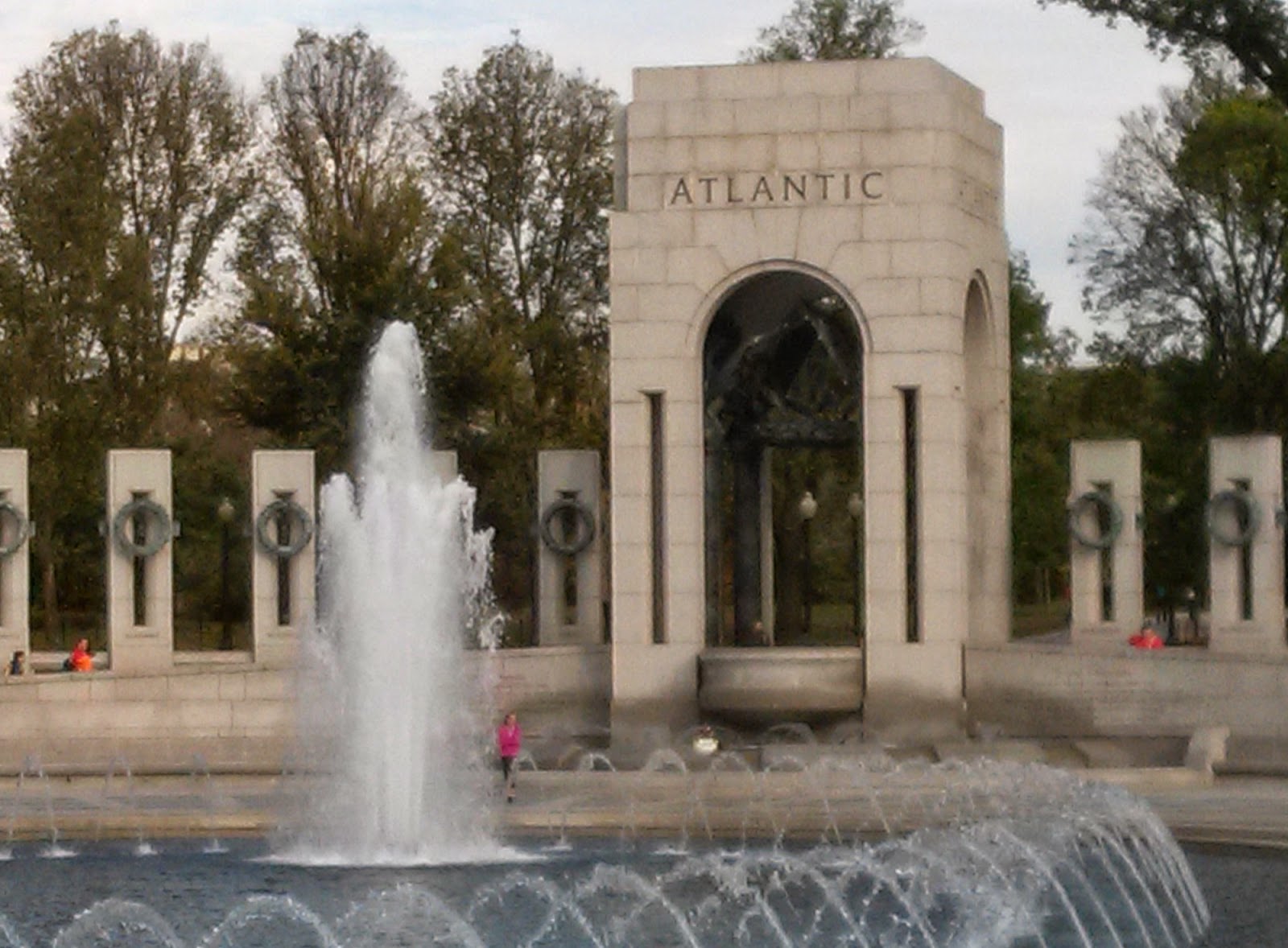 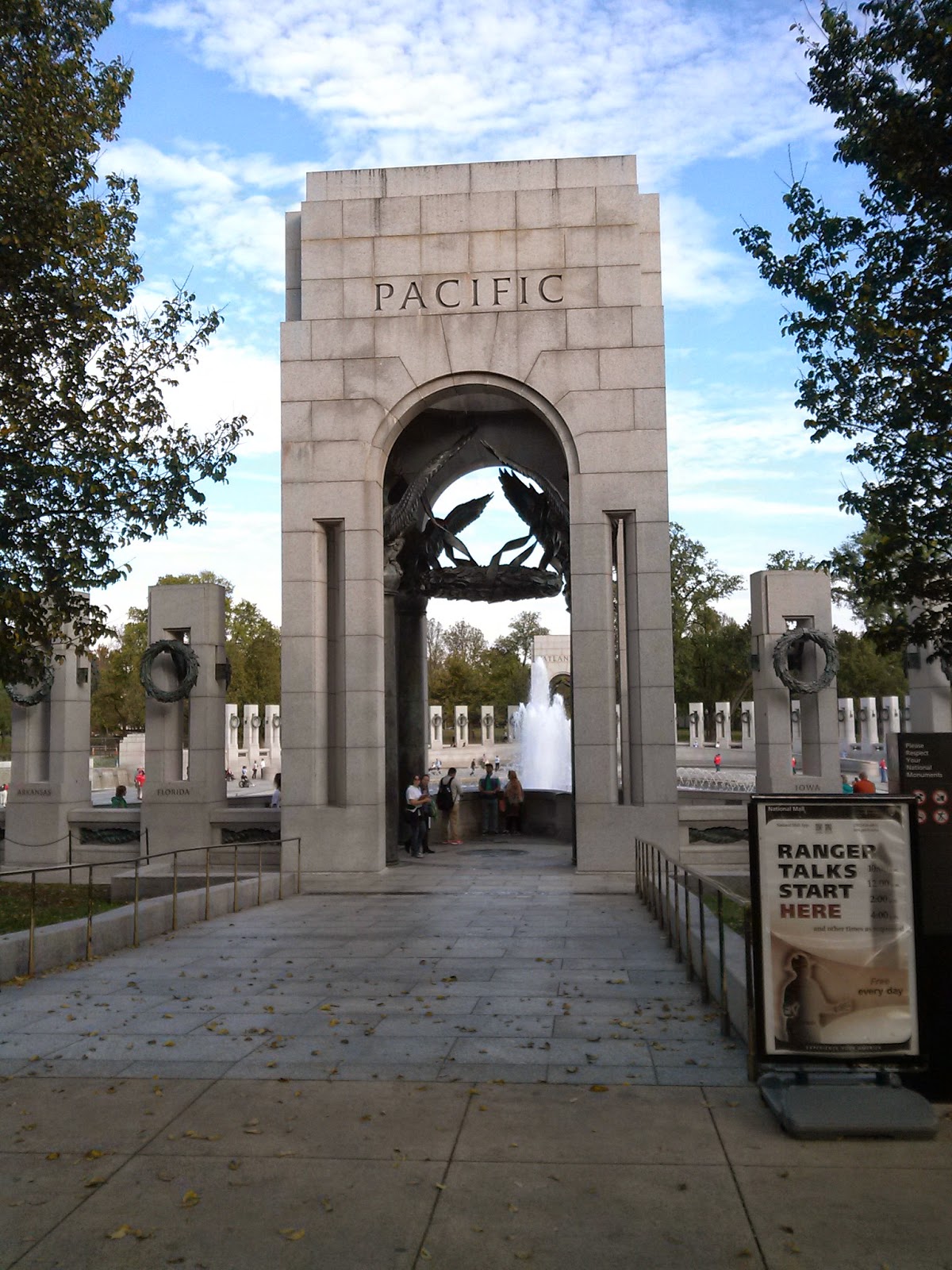 and the other "Pacific".  Looking from the Washington Monument the Pacific theater of war is commemorated on the left and the Atlantic on the right. 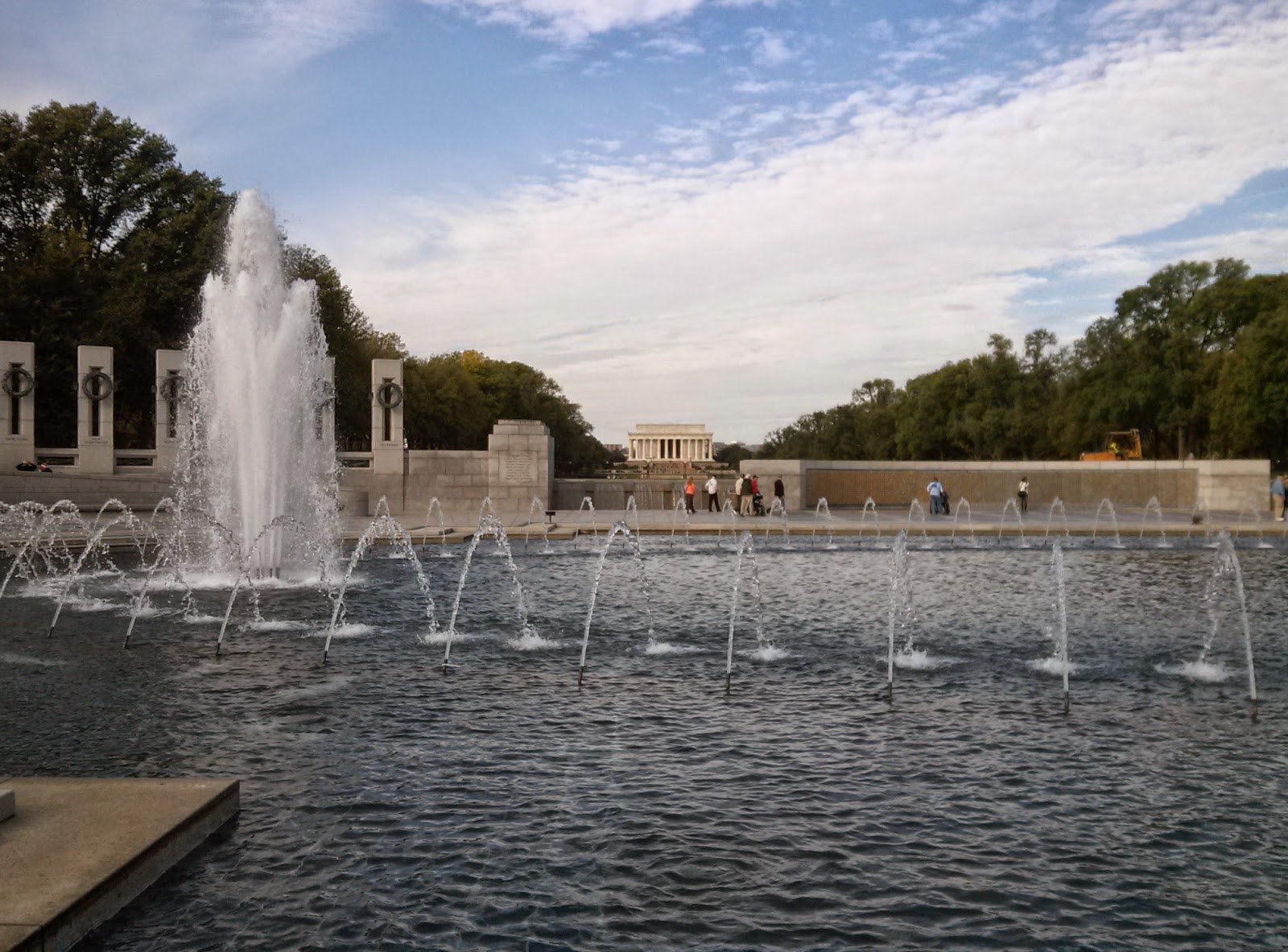 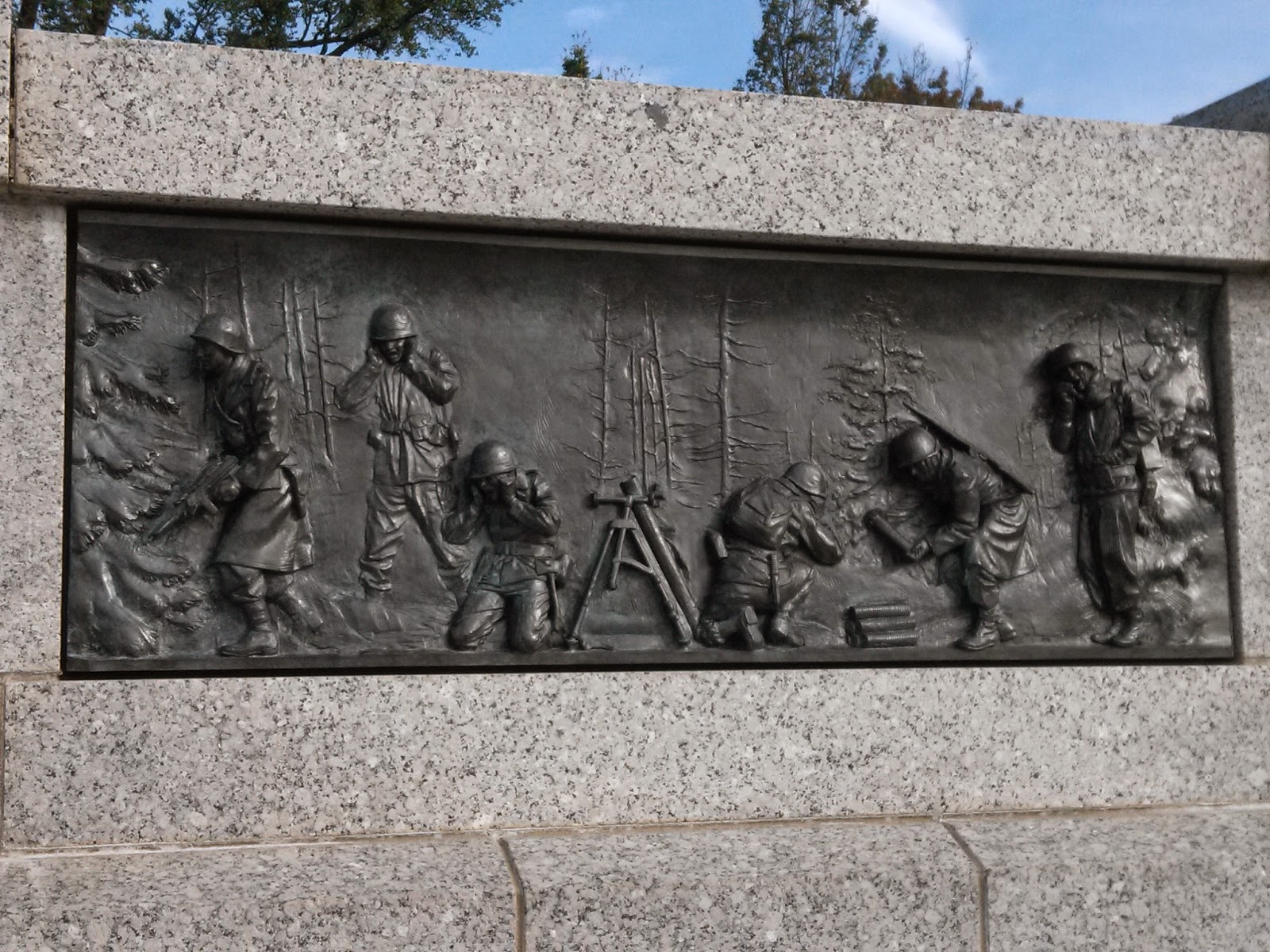 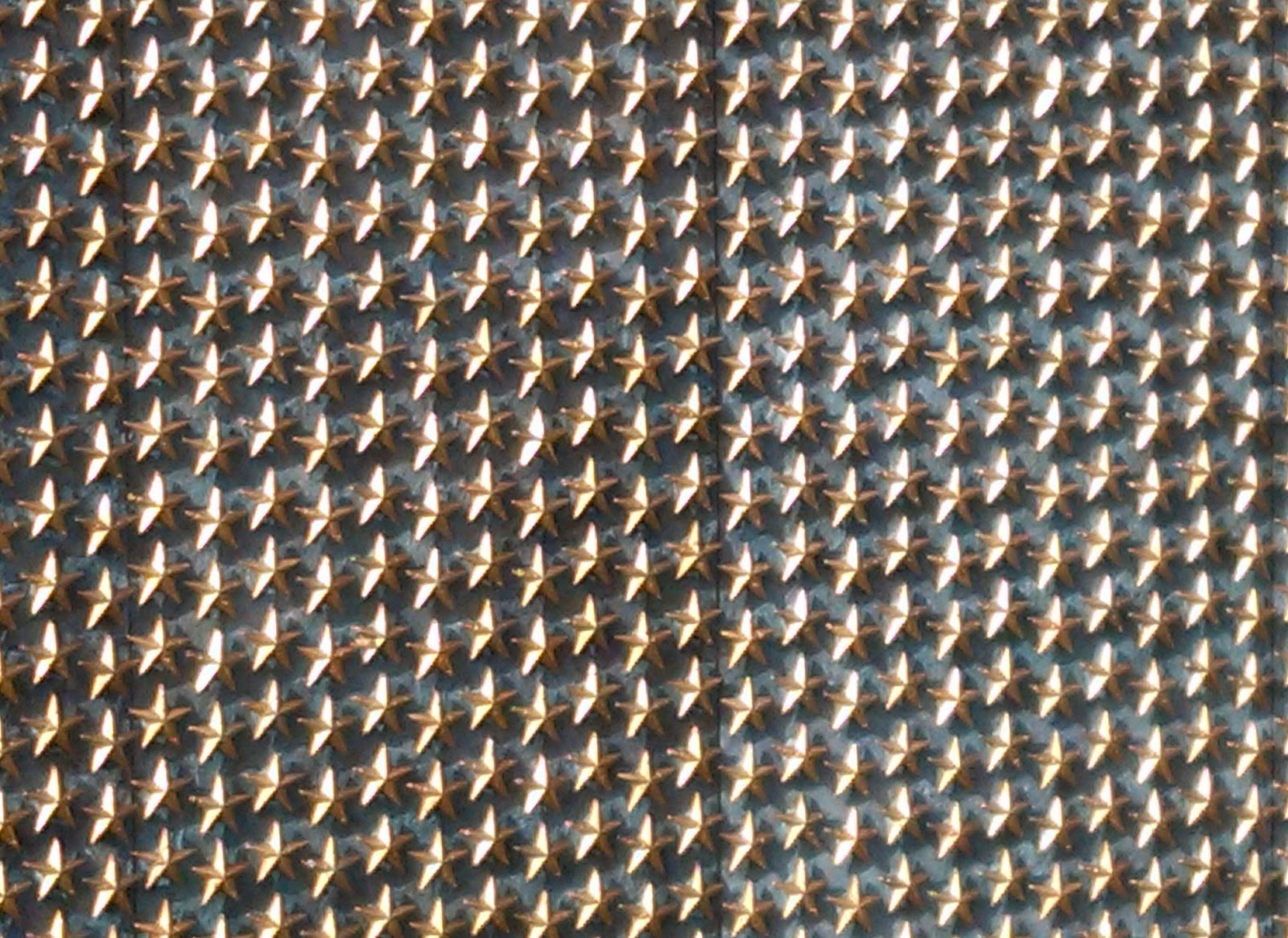 each star represents 100 Americans killed in the war. There are 4,048 such stars ; a tribute to the sacrifice of more than 405,000 American lives
﻿ 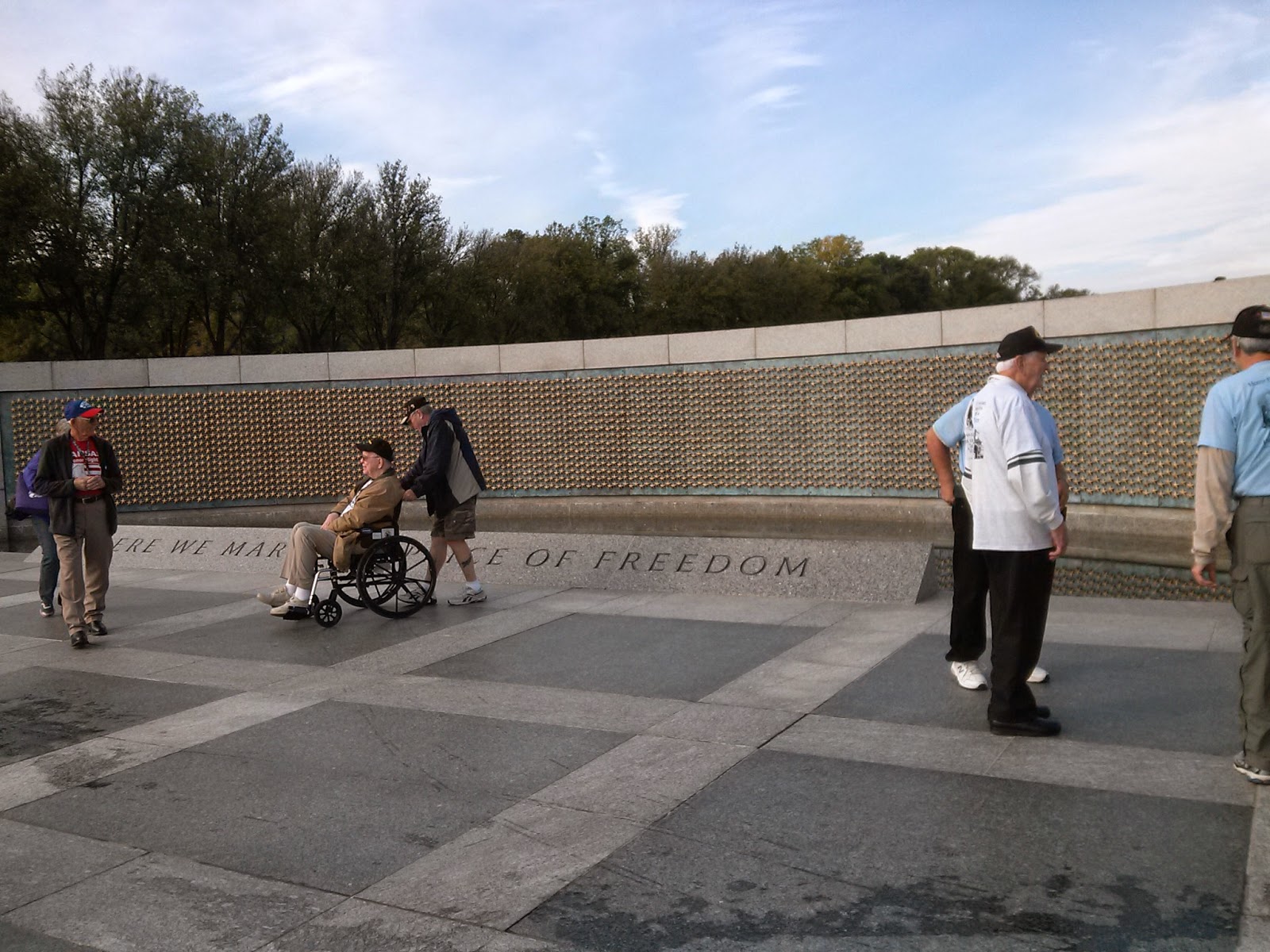 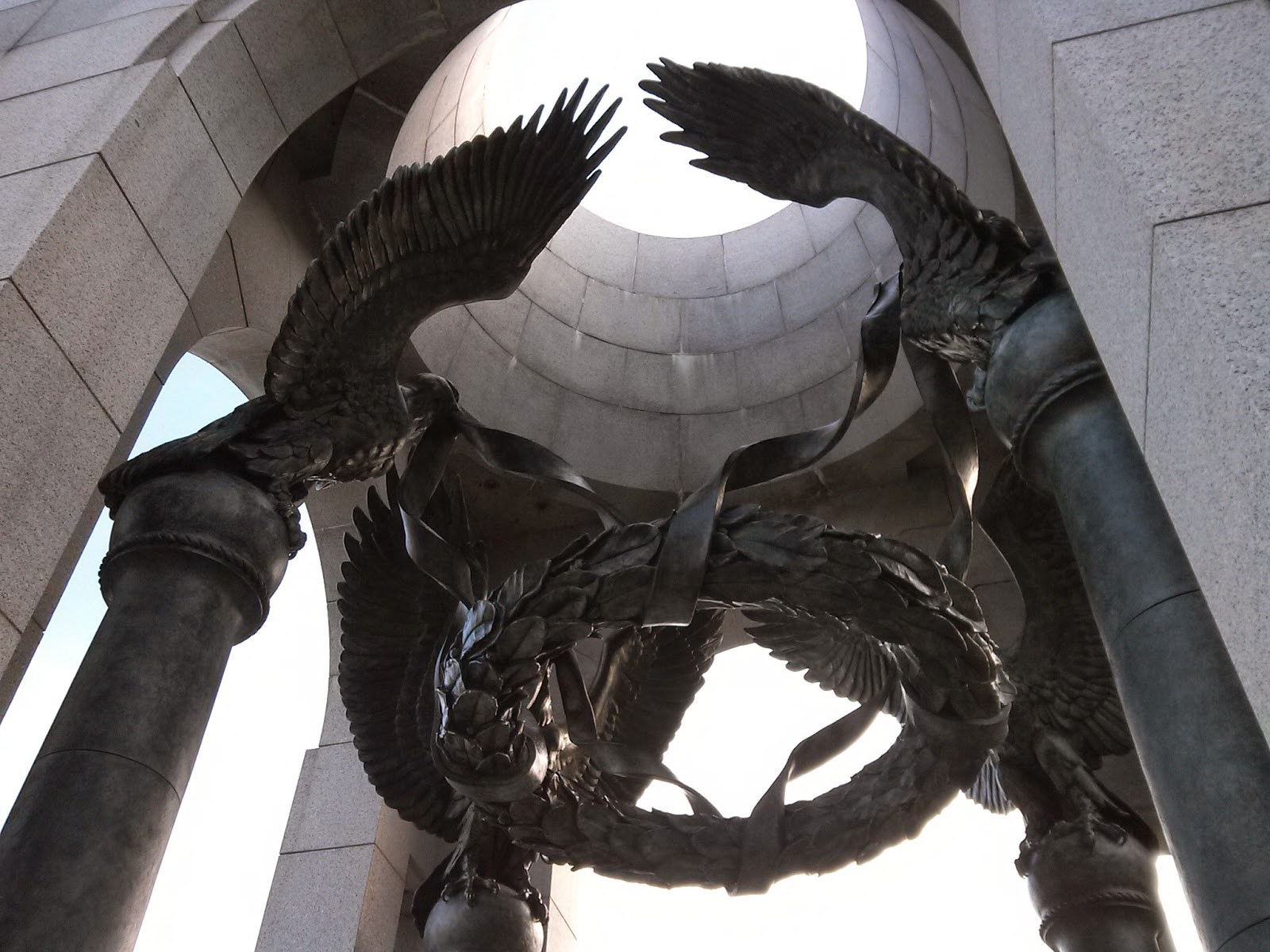 Within each gate are four enormous eagles suspending the laurel wreath of victory... 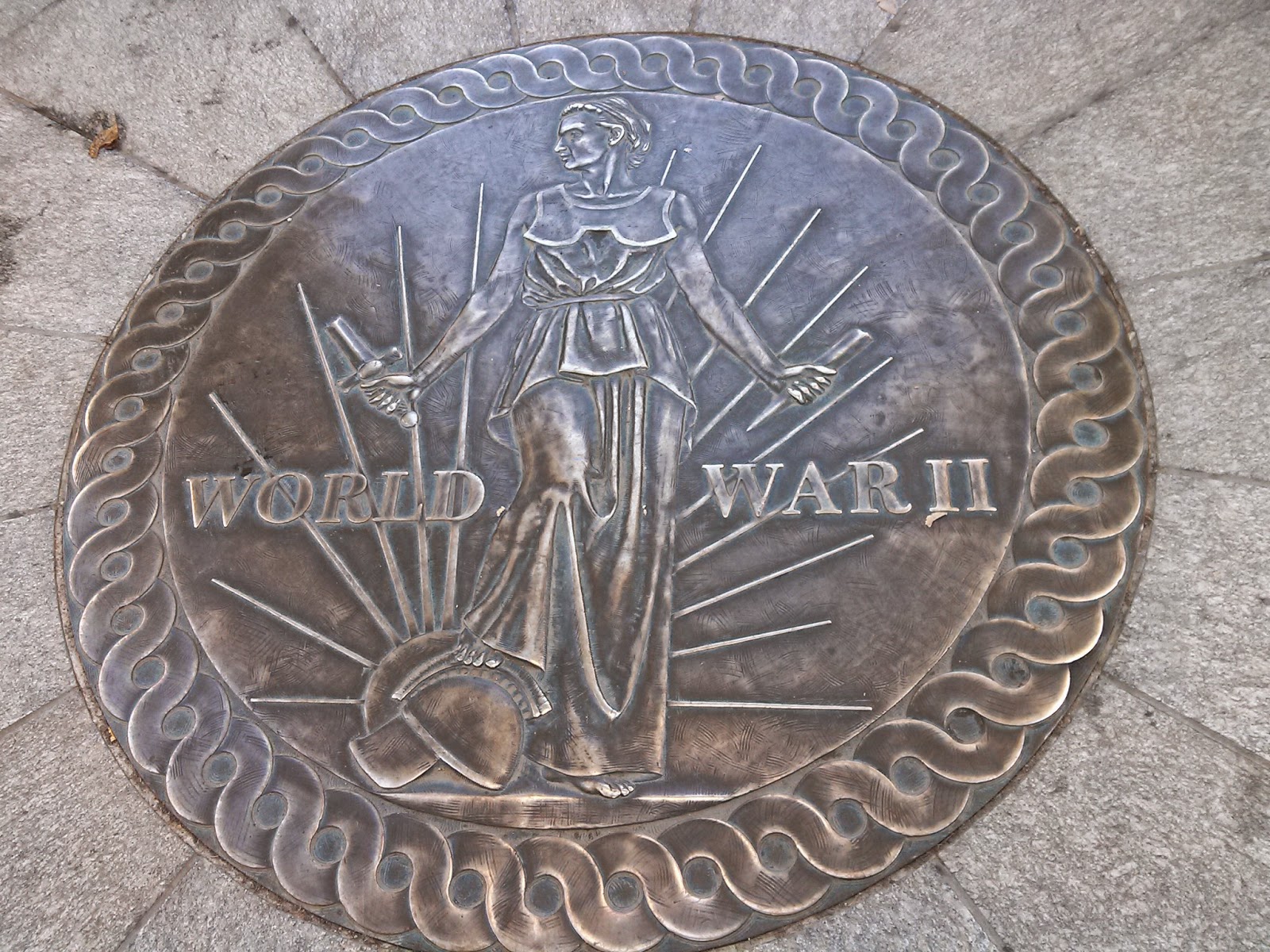 and on the floor is a large medallion showing Nike, the goddess of victory, breaking the sword of Mars, the god of war. 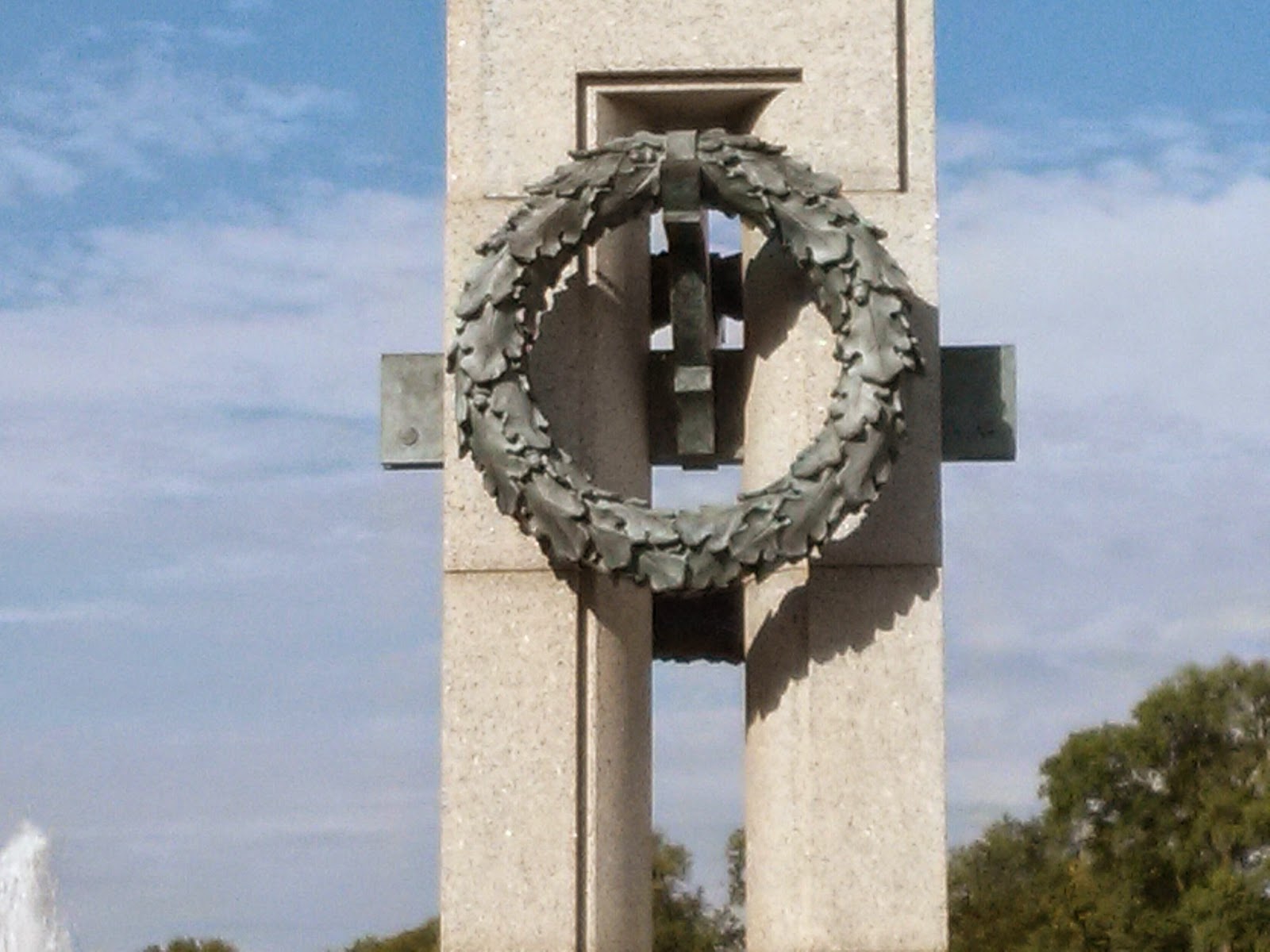 Forming the oval shape of the Memorial are granite pylons for each US state, possession, and territory.  Alternating wreaths of oak for industry... 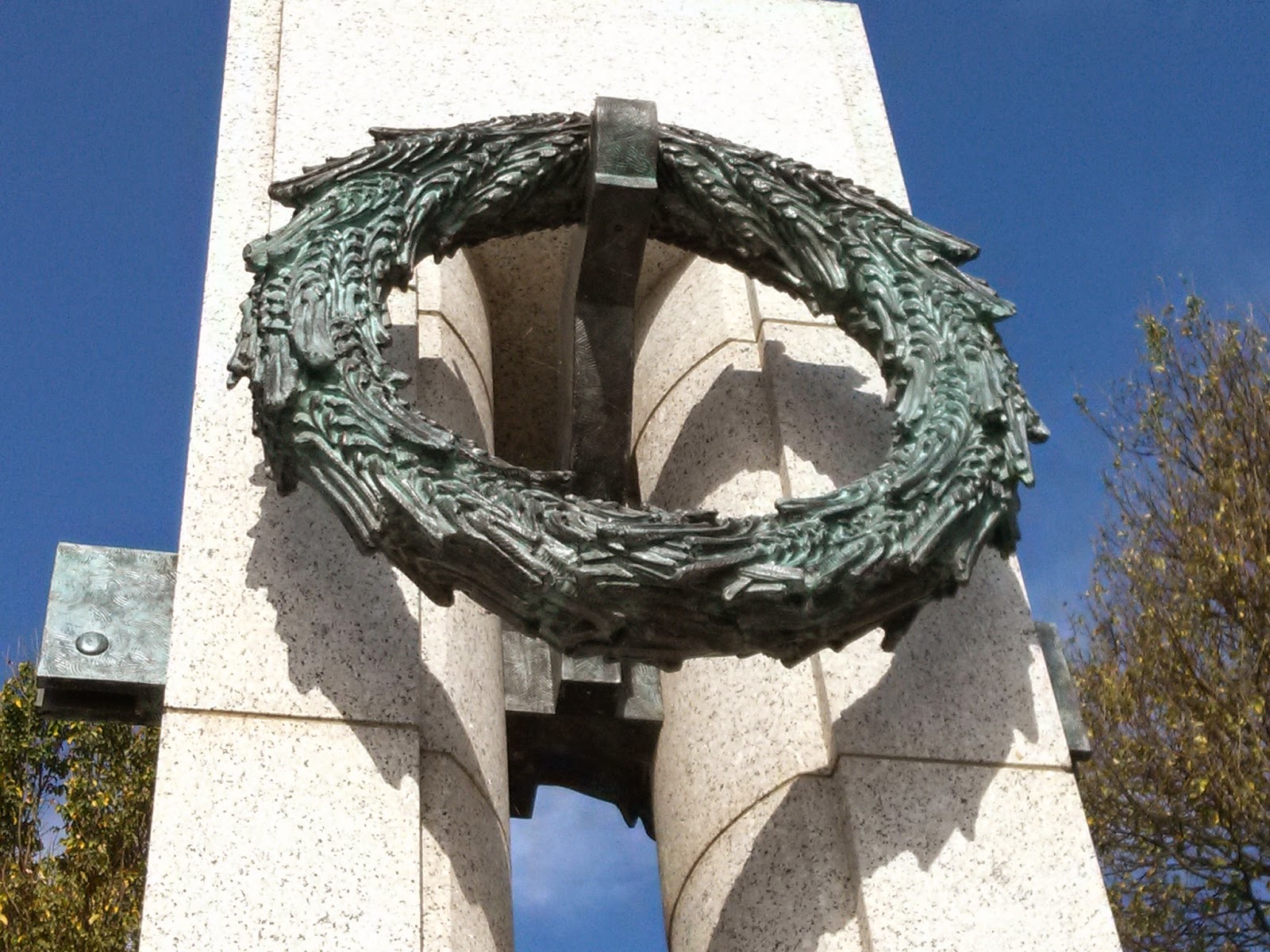 and wheat for agriculture, decorate each. 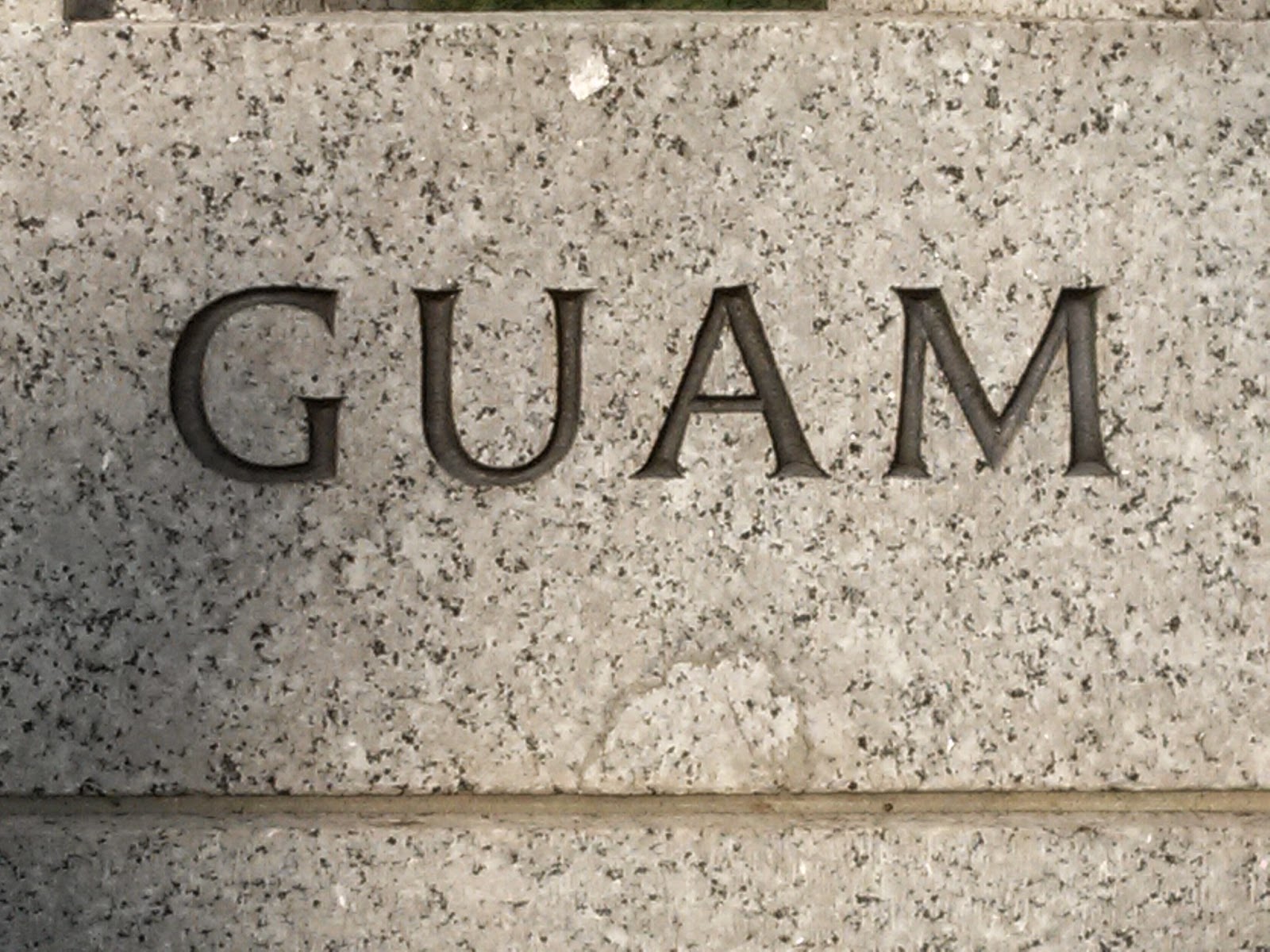 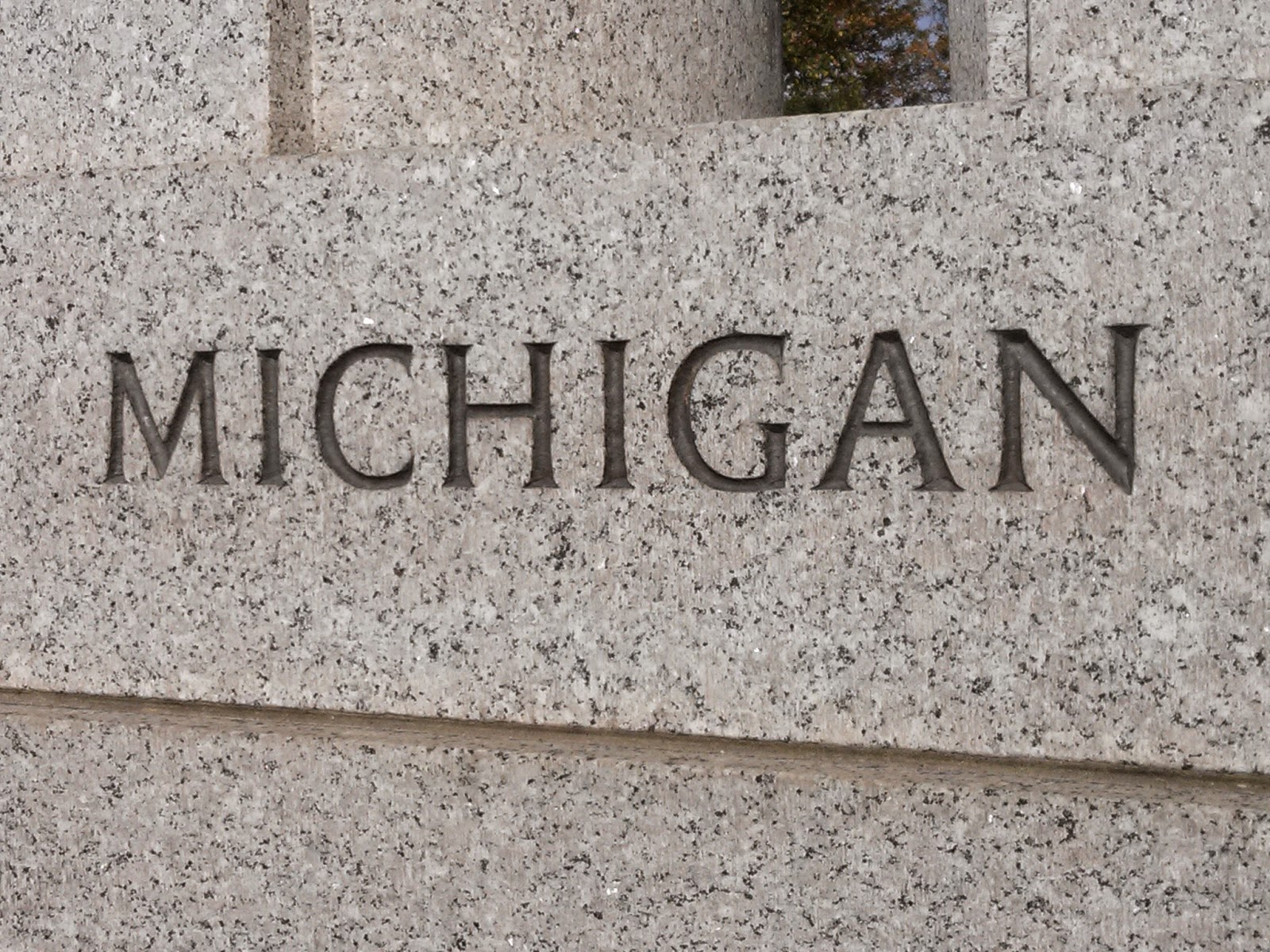 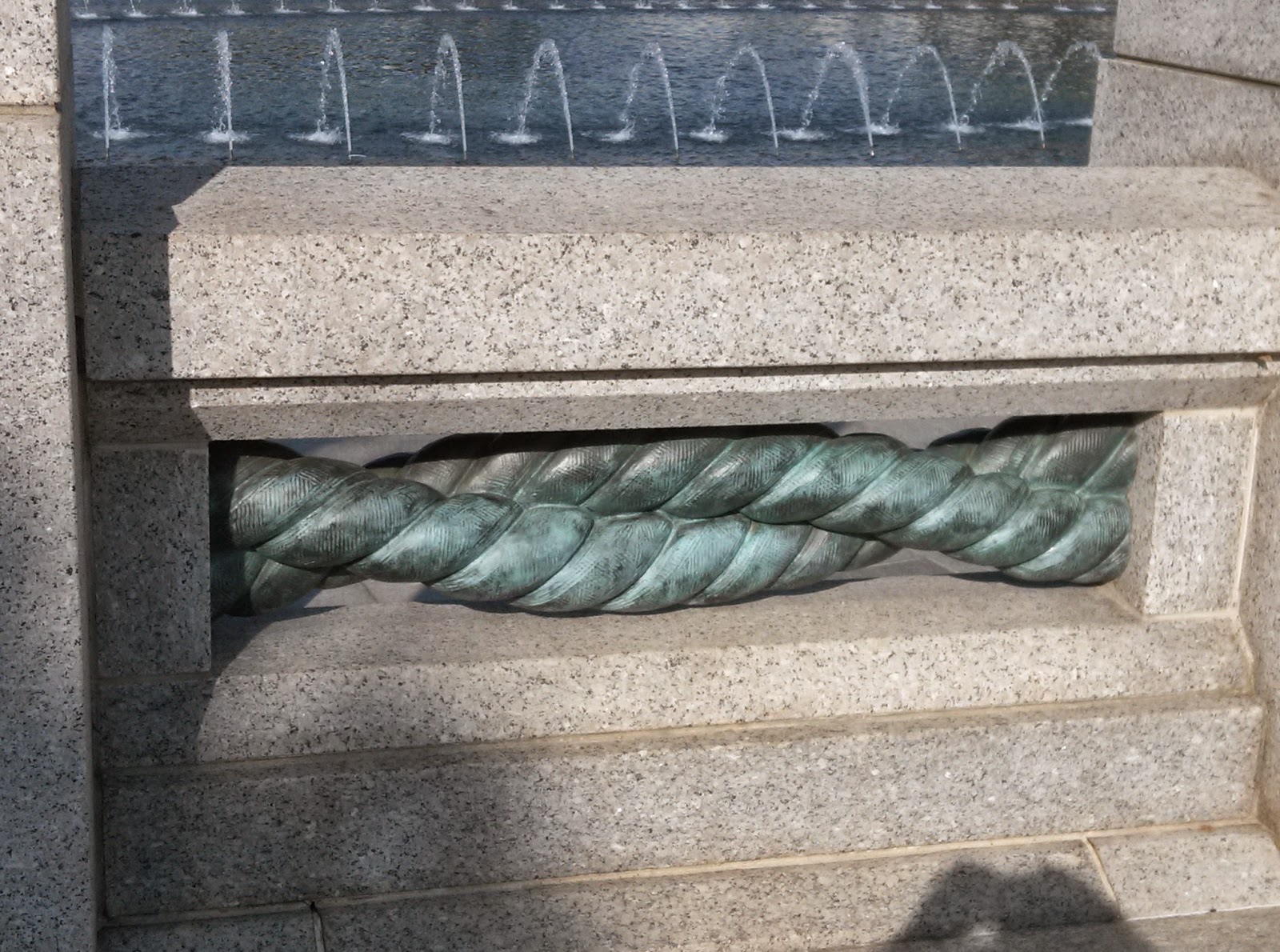 are all bound together by bronze ropes representing the unity of the nation in the great struggle against European fascism and Japanese militarism. 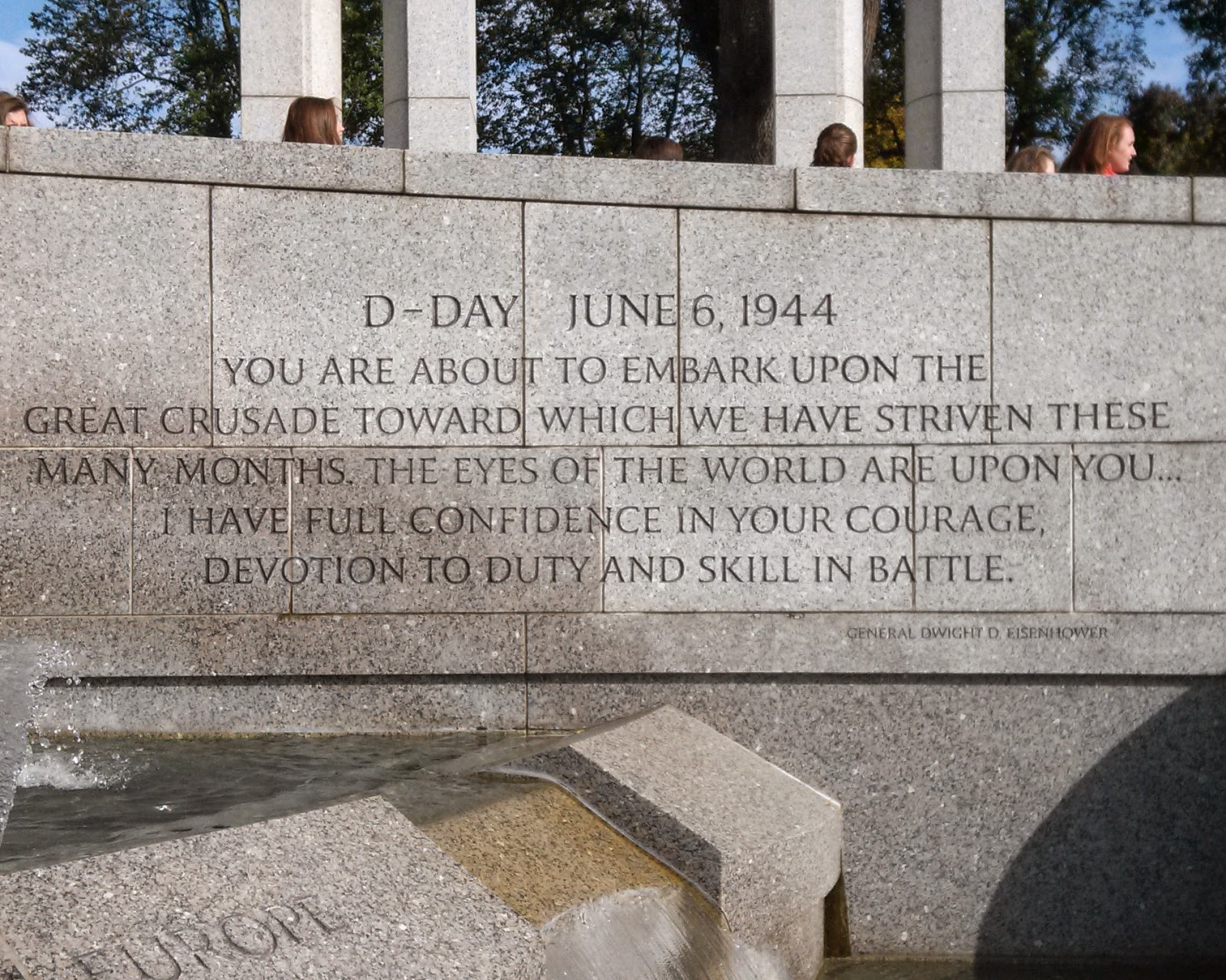 Quotes abound, lauding the efforts of the military... 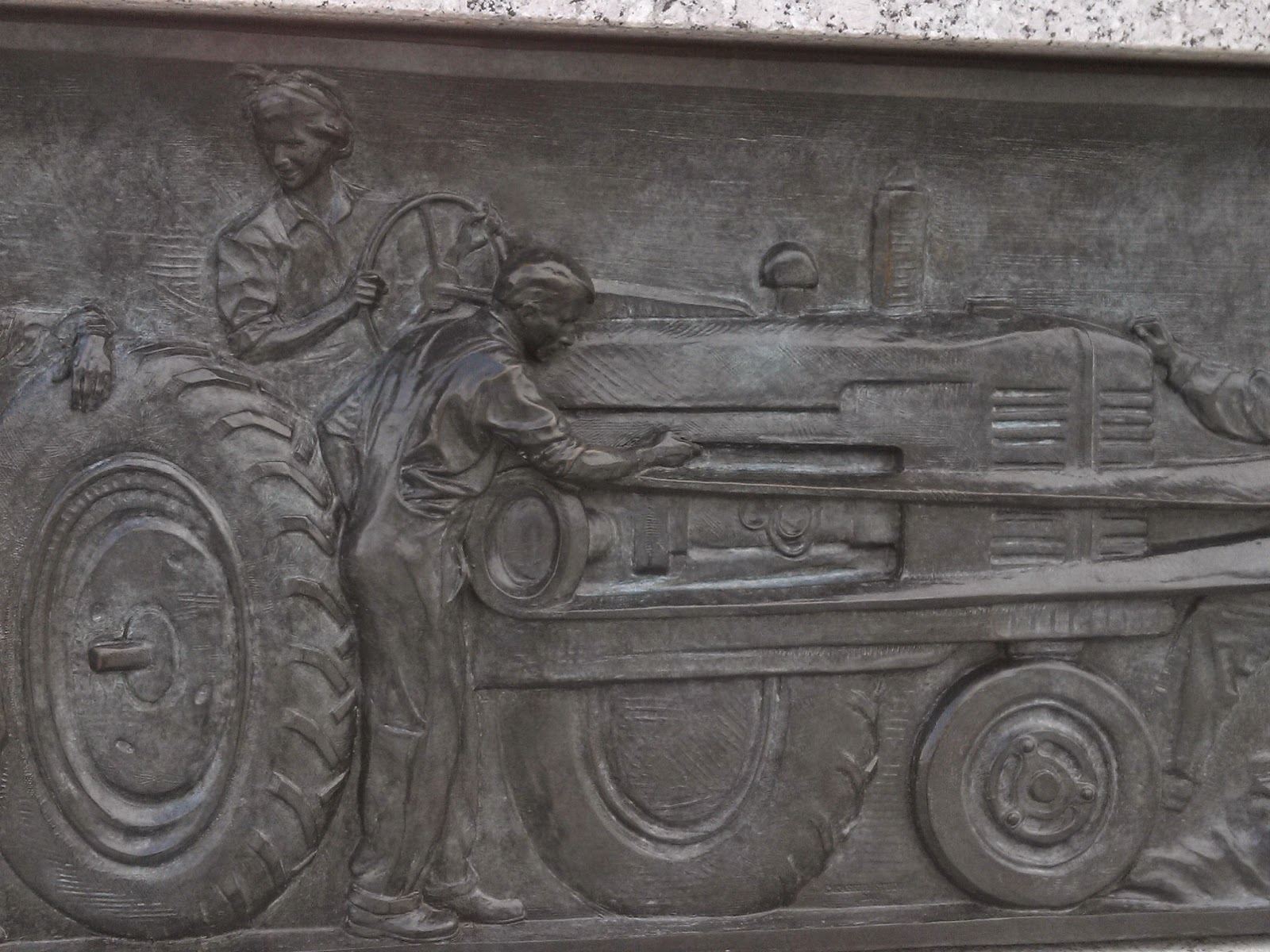 but also those of civilians,,, 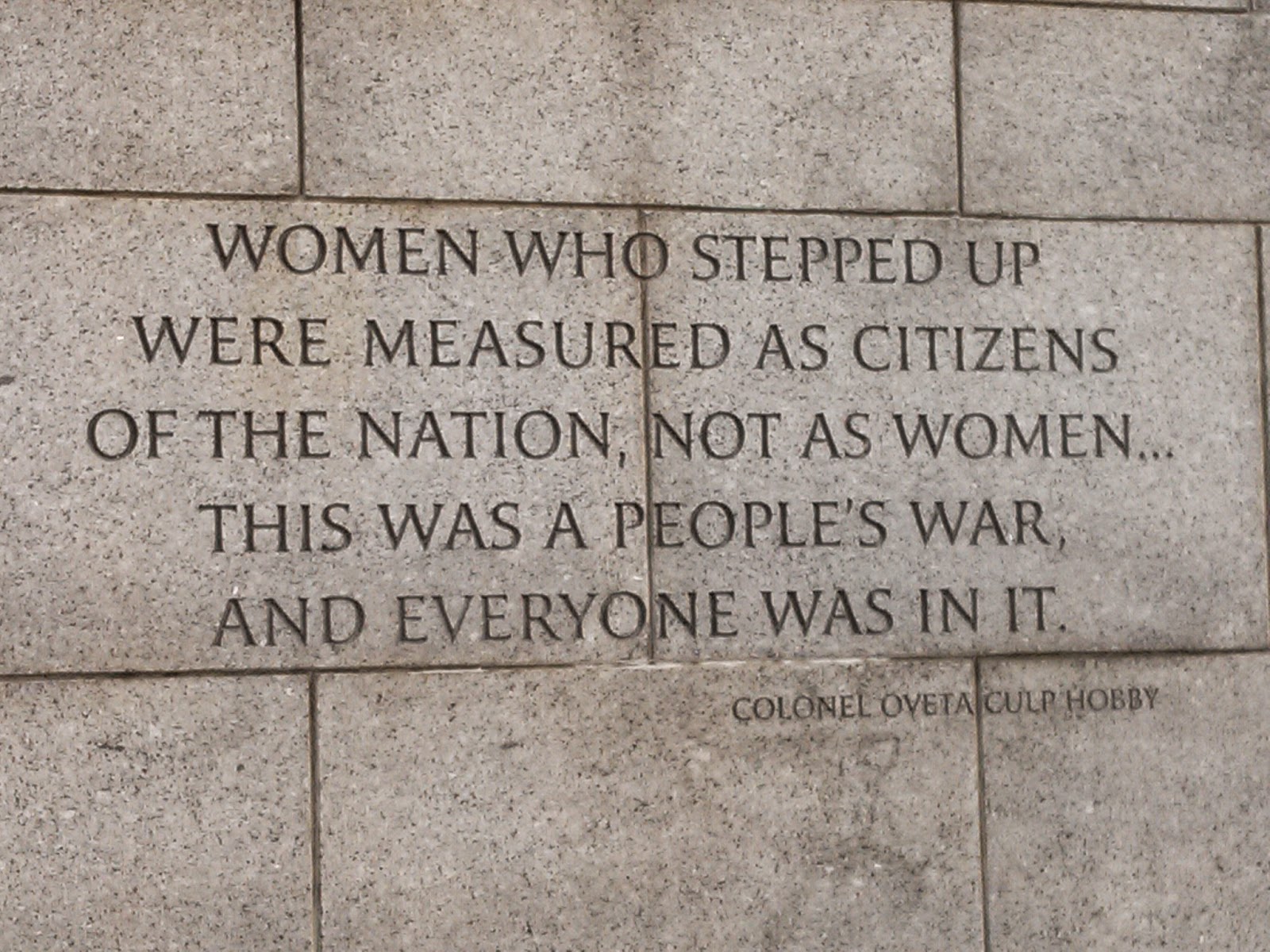 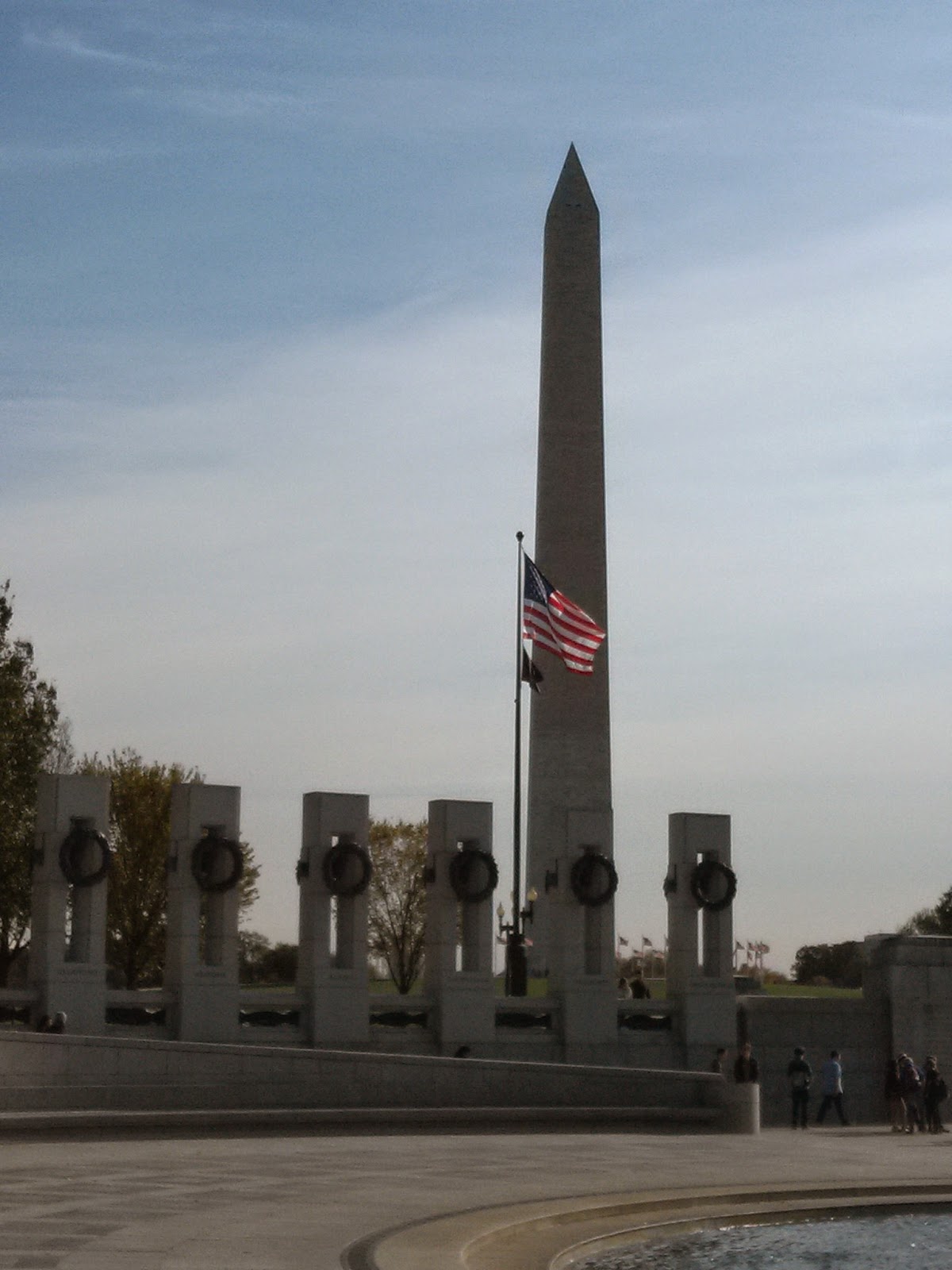 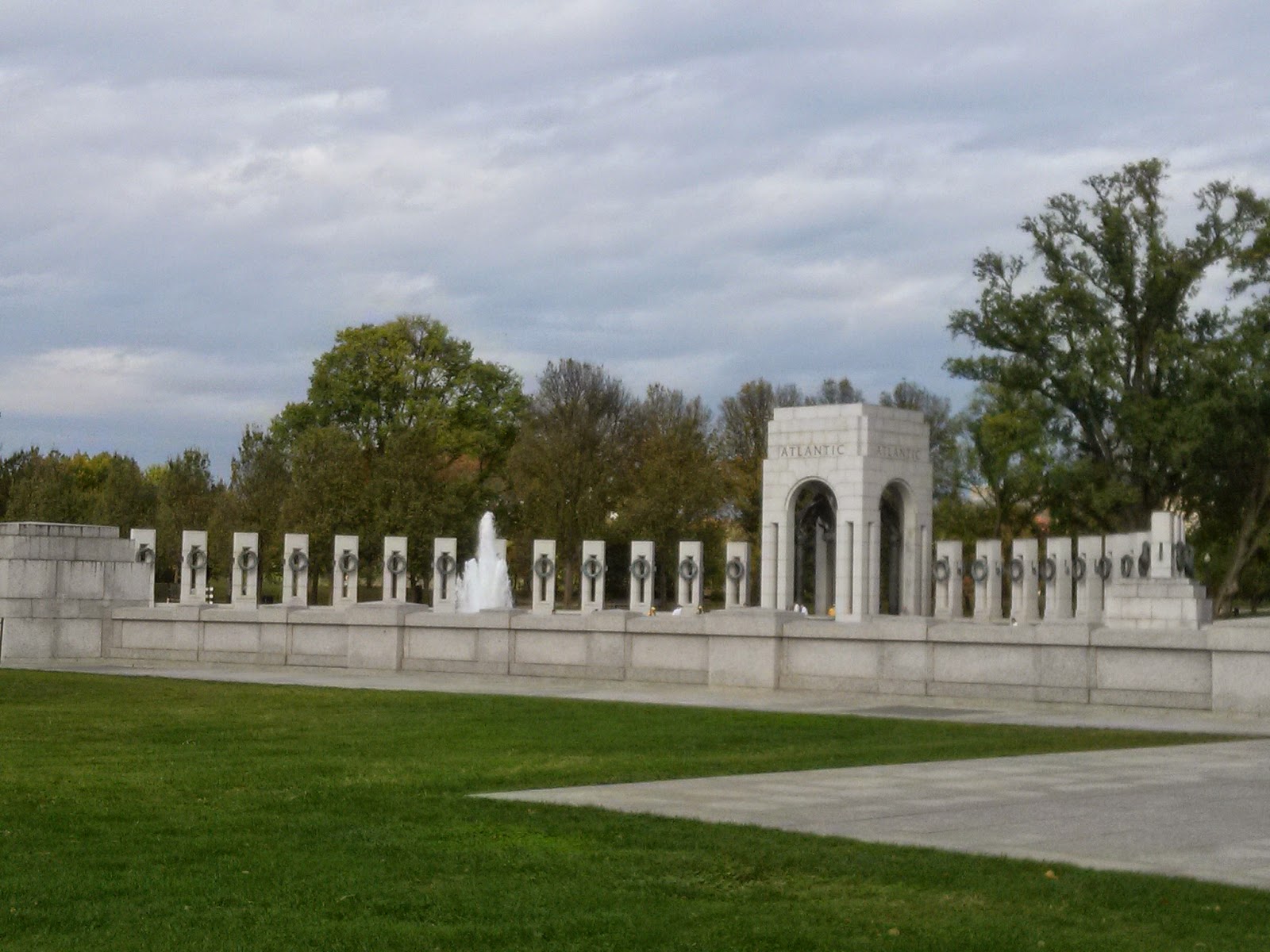 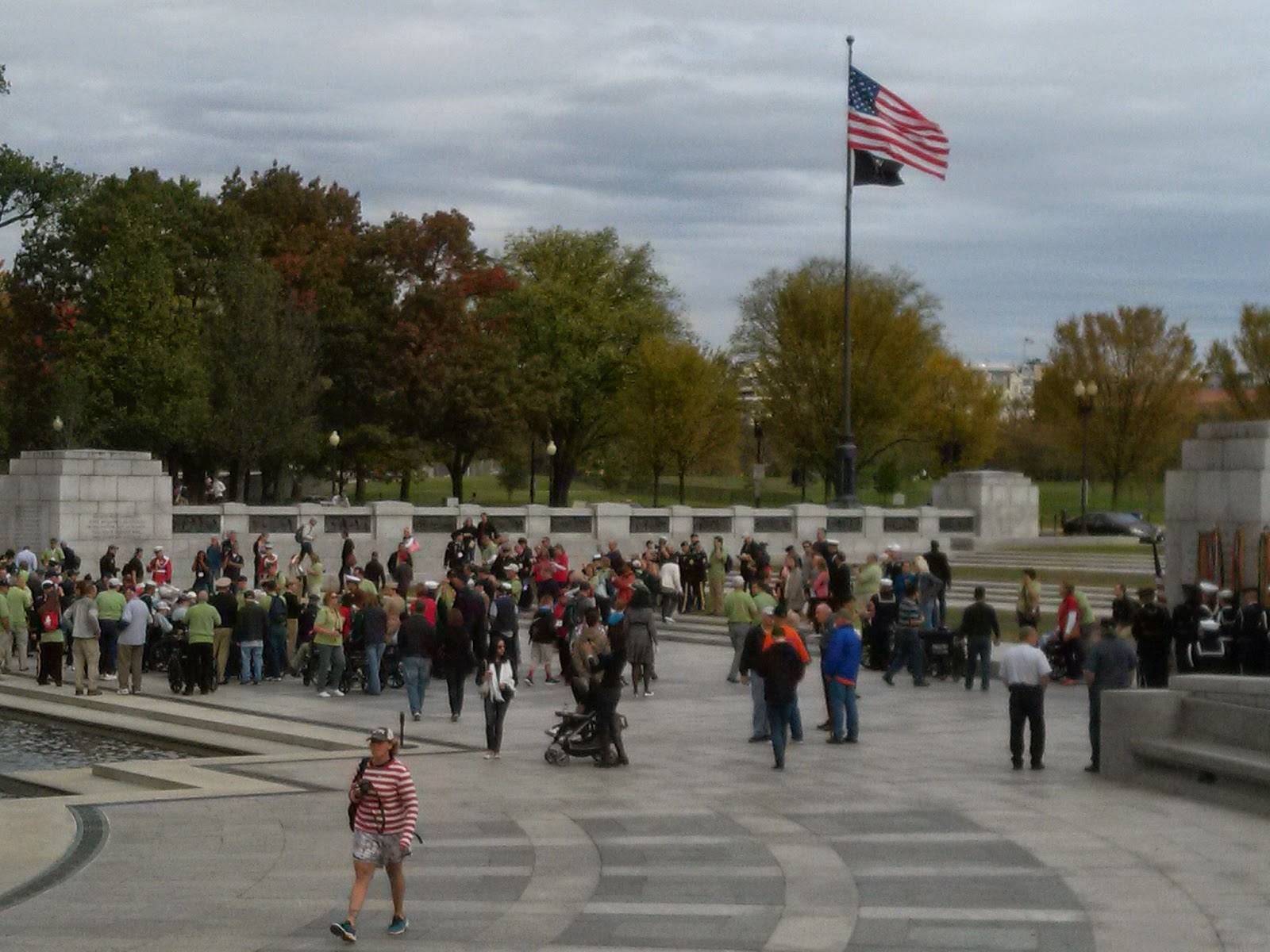 "Honor Flights" fly in large groups of WWII veterans from across the country.  Here a large group from the Chicago area is assembling for a memorial program. 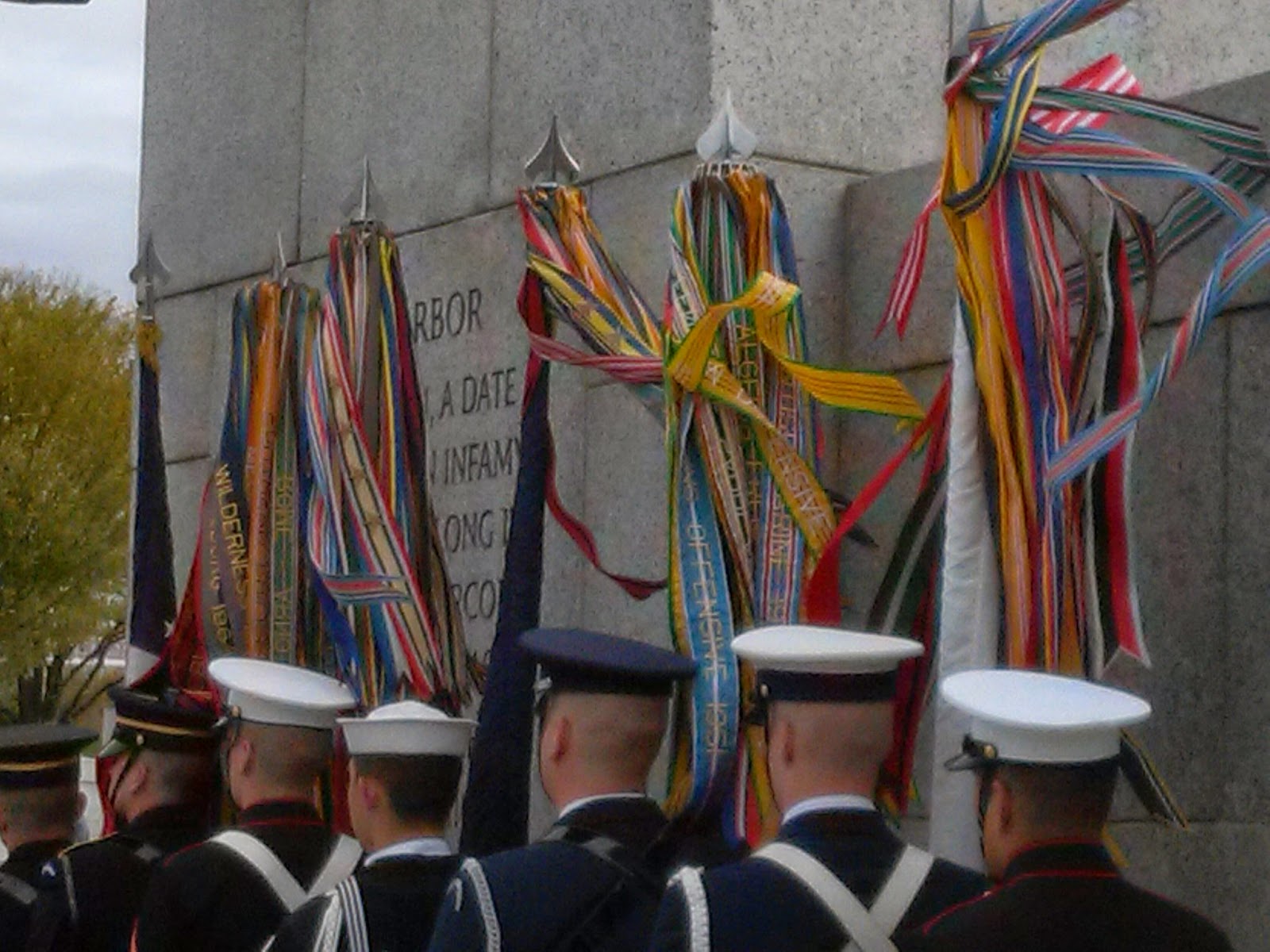 The event opened with a color guard presenting the colors. 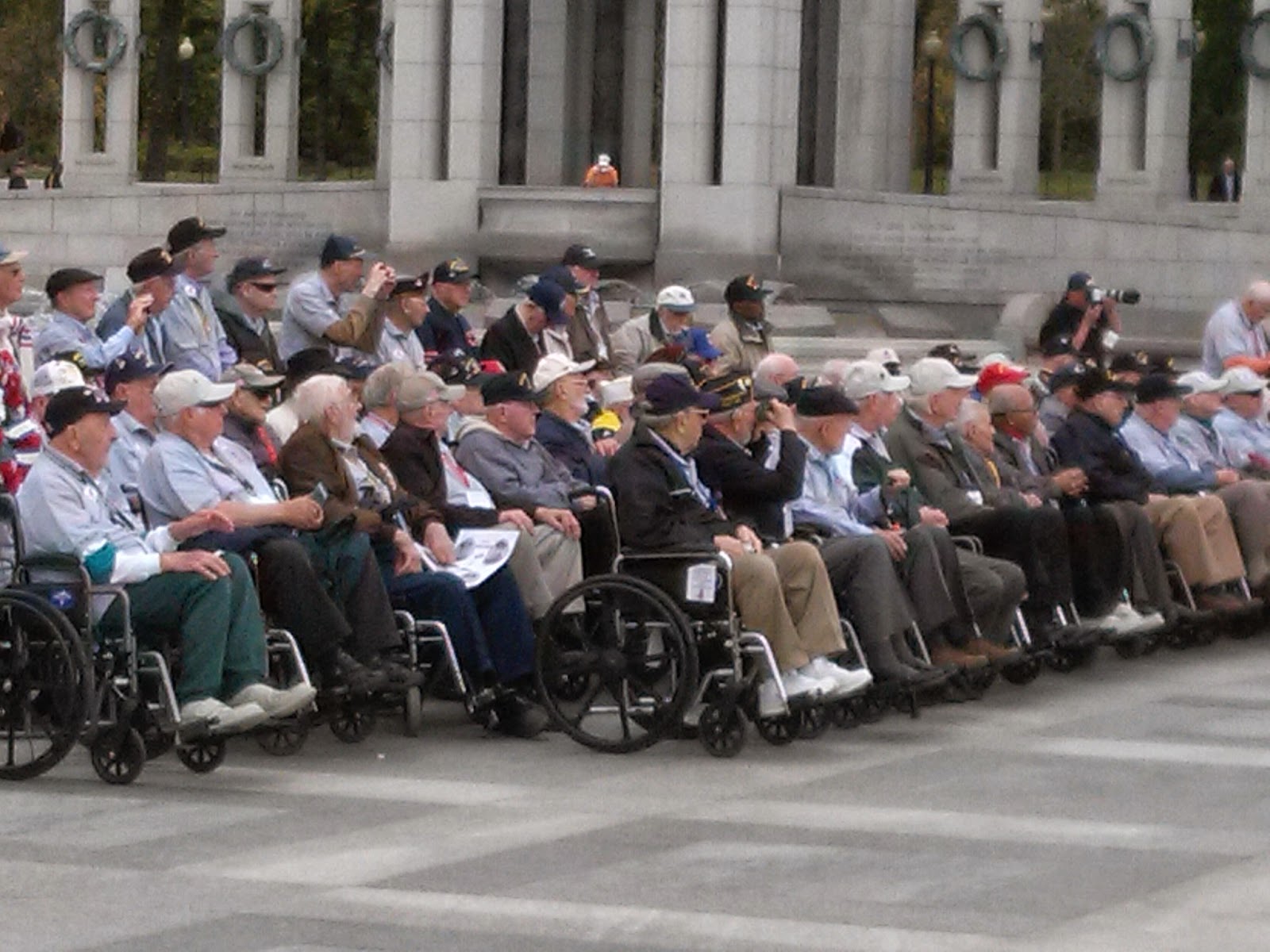 Nearly a hundred WWII veterans were in attendance.  All of these former GI's of "the good war" are justly proud of their monument, built to commemorate their service and sacrifice and to remain long after they are gone to remind future generations of the price of freedom.
And each one of  these men an women are tickled by a phenomenon unique to their time of service... their old buddy Kilroy, immortalized in granite.
Drying out and warming up, just north of Boonsboro,
Ranger Mannie﻿
Posted by Mannie Gentile at 1:50 PM 3 comments: