Many years ago I bought a large-scale Civil War cannon at a junk store.  It had some hokiness to it and just last year I rehabed the carriage and the dry-rotted wheel spokes and made some minor modifications.  With a fresh coat of paint it looked pretty nice. save for the barrel.  Made of machined steel, it was in the profile of a bronze l2 pounder light gun howitzer barrel.  I preferred something a little more modern looking.  So, my first project on my woodlathe undertook the further transformation of my cannon into a 3-inch Parrott rifle. 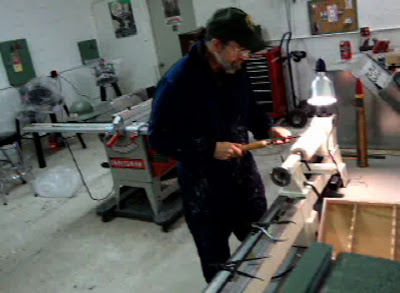 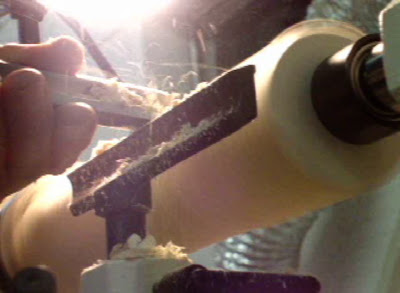 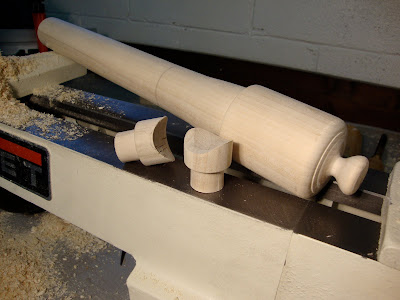 The finished product in three pieces; barrel and left and right trunnions.  The trunnions were aligned to the sides of the barrel and glued and clamped into position. 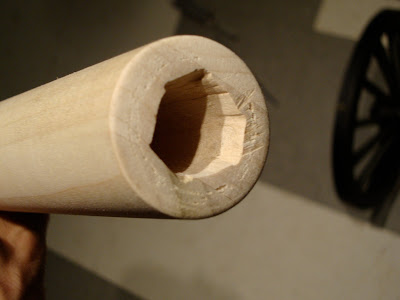 I drilled out the muzzle with a 5/8" spade-bit and hand filed the distinctive Parrott-style lands and grooves of the rifling. 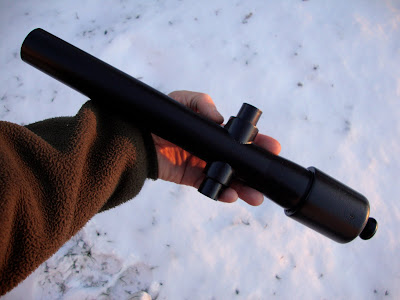 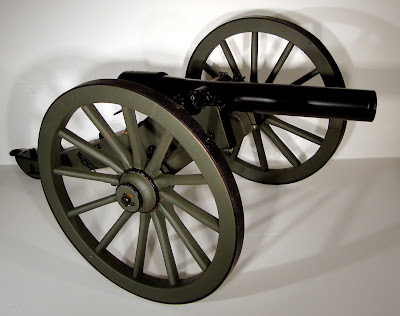 Mounted up on its carraige this iron monster is ready to take to the field.
Next project?  I'm thinking a 14-inch Rodman gun. 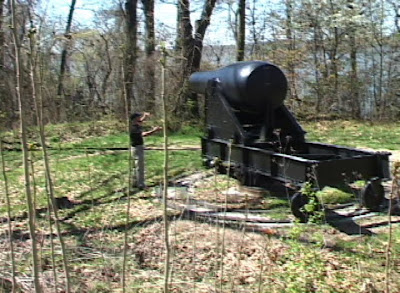 
The big storm that blew through yesterday closed the park early and left 3 inches in its wake. 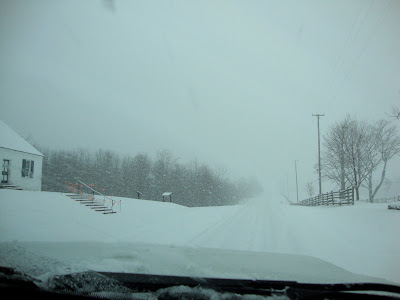 Ranger Rory and I were the last ones out and the Park roads were a thrill-ride! 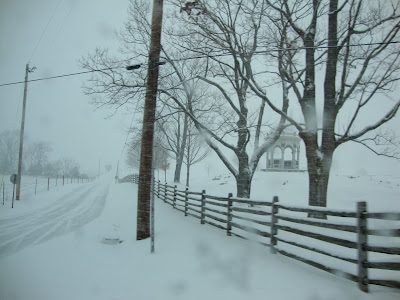 Hunkered-down at home, I had a pleasant evening watching the flakes come down.
This morning, a clear blue sky revealed... 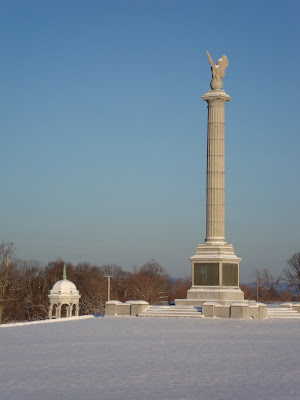 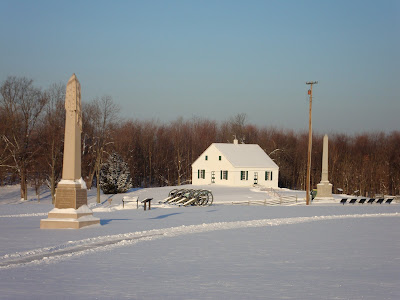 Ranger Mannie
Posted by Mannie Gentile at 6:40 PM No comments:

try crossing this in a "hop, skip, and a jump" 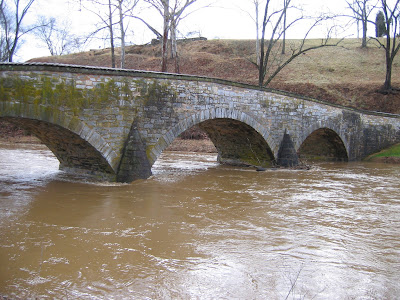 The rains overnight and this morning have Antietam Creek running high, fast, and the color that Ranger Hoptak likes his coffee. 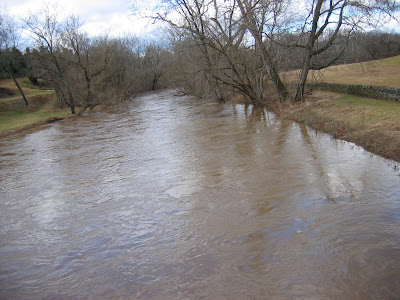 This day which started out so wet and windy ended up sunny and mild, and though we can't start pretending that its anything but the middle of winter, nonetheless, as someone I used to know always said: "spring is where you find it". 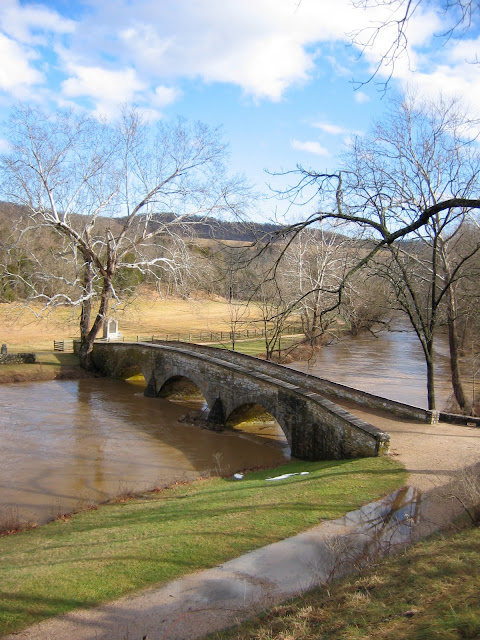 I found it today...
just outside of Sharpsburg. 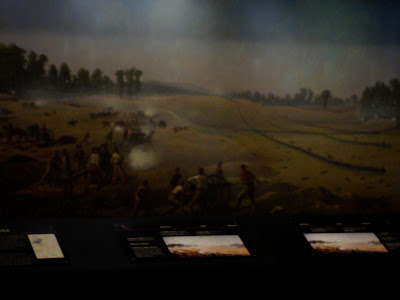 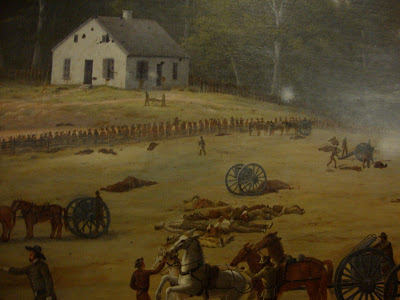 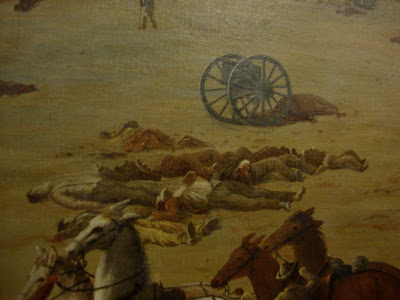 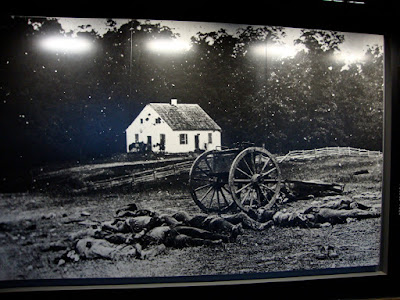 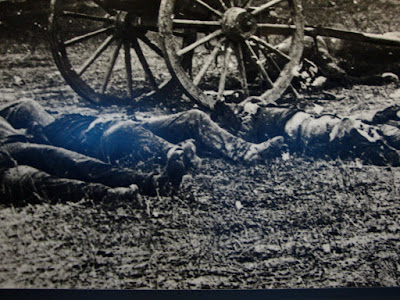 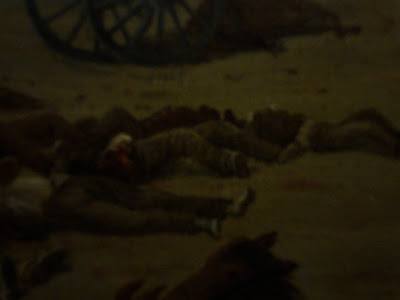 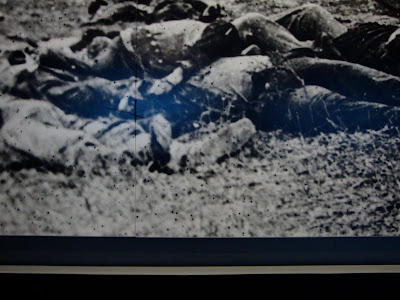 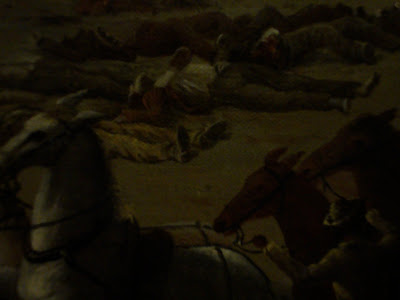 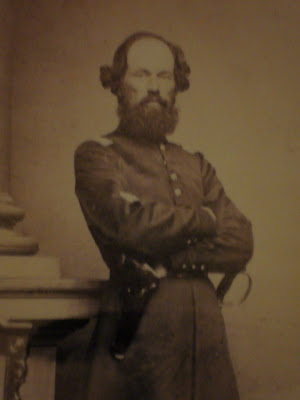 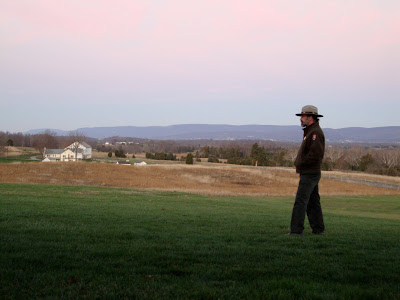 To many relatives, family members, friends, colleagues, and total strangers for their encouragement, support and mentorship over the past four years, my gratitude is boundless. 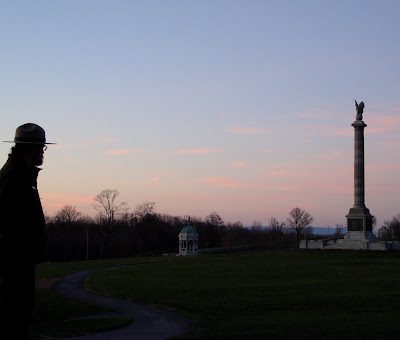 The winter weather has driven me indoors, at that beautiful battlefield along the Antietam.  Indoors I take fewer pictures, and pictures have always been the basis of my entries to this blog.  So its been somewhat of a dry-spell during this cold-spell.

Not that there isn't a whole lot of activity going on at your favorite National Park.  Work continues on the new exhibit gallery at the Visitor Center, and historic buildings are still being restored all over the field.  Preparations (in echelons above me) are underway for the 150th.  Much is percolating at the battlefield, even under a mantle of snow.

I reflected to Ranger John Hoptak that I'm coming up on my 4th year at the park, and, my-oh-my, how the time did fly!  Though this blog started out as a journal of a new park volunteer (note the URL) it morphed, within three months (lucky me) to that of a rookie seasonal ranger who'd just landed  nearly everyone's dream job.  I managed over these years to piece together enough of a patch-work career to enable me to hang on to this most precious seasonal gig.  It was substitute teaching which saw me (pleasantly) through the lean non-rangering months, and kept the pantry stocked and the gas tank filled.

There are no givens as a seasonal, and it doesn't pay to come to the job with an over-developed ego or an inflated sense of entitlement.  The job "is what it is" as Ranger Gamble counseled me early on, and it also is what I make it.  If one maintains focus, commitment, humility, and a sense of humor, and is willing to make any number of sacrifices along the way, seasonal rangering can be a most satisfying and rewarding job.  And if one is in the right place at the right time, with the right qualifications sometimes other opportunities open up, like the STEP program, that's the program that allows seasonal rangers to work full-time hours as they return to school in a degree program.

That STEP program was a great gift for me, as it allowed me to continue chasing this dream of working at this beautiful park with these remarkable people.

Yes, my-oh-my how the time has flown.  As we approach the eve of the sesqui-centennial of the Civil War I'm ever aware of where my little mind was fifty years earlier, thrilled with the prospect of visiting the eastern battlefields with my father and brother.  I remember the parks, Gettysburg, and Antietam, and I remember the Rangers as they told me stories of those places of history and imagination.

And now, I, get to return the favor.

What a wonderful journey that continues to unfold...