And here we are 777 posts later, and My Year of Living Rangerously has come to a close.

Today I retire from the National Park Service.

So here's an interesting thing: This afternoon I was lounging around the house, just running-down the clock until my 5:00 pm retirement from the Park Service. On the Mall we've all been teleworking because of covid and I've been working from home for the past two and a half months.  Retiring in this vacuum was pretty anticlimactic...and a little bit sad.

Suddenly, a lightbulb went off over my head.

Before I knew it, I was walking out the door, in uniform (with facemark and anti-spit goggles) and making a bee-line to nearby Antietam National Battlefield, where I spent so many happy years.
I wasn't exactly sure what my plan was.

I got out of the car at the visitor center and spotted a family sitting on the steps of the New York monument, which overlooks much of the battlefield.  I headed toward them.

The day was perfect - 73 degrees, mostly sunny, a crystal-blue sky with puffy clouds, and my beautiful South Mountain looking down at us.

What followed was an impromptu 15-minute Q&A program.  They were enthusiastic and asked some great questions, and I was really bringing down the interpretive thunder, we were having a ball.

The dad was one of those people who think that the Battle of Antietam ended in a draw...by the time that I was done with him, he was convinced that it was a decisive Union victory.

I went out on my terms, and it was great to be a Ranger that these nice people will remember.

Thanks for staying with me as this blog progressed through 14 years of rangering. Some years I was posting like fury, and there were also a few years were the blog lay almost dormant.

The ebb and flow of my entries was directly related to my enthusiasm for the places that I was working.  Antietam was responsible for hundreds of posts.  Those were happy days for me, as was my recent 60-day detail at Monocacy National Battlefield which was responsible for the wealth of posts and videos from January and February of this year.

These past six years in Washington DC on the National Mall were a different story altogether.  The daily five-hour commute would color any experience...and the bottom line is - I'm a "cannonball ranger", battlefields are where I belong, and where I am happiest.

"Power of place" is what works best for me as an interpretive Park Ranger; to be able to point to a spot on the ground and say "Here is where the 16th Connecticut was rolled up by A.P. Hill's division, or, here is the spot where McCausland was surprised by veterans Union soldiers when he was expecting only militia.  The immediacy of the place is exciting  for me, and exciting for the visitor...there is just no substitute for that experience, and you just don't get that on the National Mall.

So, my career had its ups and downs, but nonetheless, through it all, I got to be a US Park Ranger...an actual American icon.  Putting on that uniform every morning was a transformative experience, and the responsibility that went with it was palpable...as was the joy.

Being a Park Ranger for the National Park Service was, professionally, the thing of which I am most proud, and what I think was, next to my military service, my most important contribution.

It was worthy work, and I gave it my very best.  The greatest thrill, and the thing that I thought was of the most significance, were the times that I was able to fire the imagination of a child.  A trip to Gettysburg when I was nine started me on this journey, and I was glad to start other boys and girls on theirs.  An active interest in our history can inspire an active interest in citizenship, and that's the job of all of us adults - to inspire children to be the best citizens that they can be.

I've enjoyed the job, and the reporting of it in this blog, and I hope that you enjoyed those reports.

I keep other blogs which you may find interesting:
combat helmets.blogspot.com
toysoldiersforever.blogspot.com
as well as some others.  Tune in, you may enjoy them.

Very best wishes to all of you, and thanks for your company as we side by side, hiked the Civil War trail together. 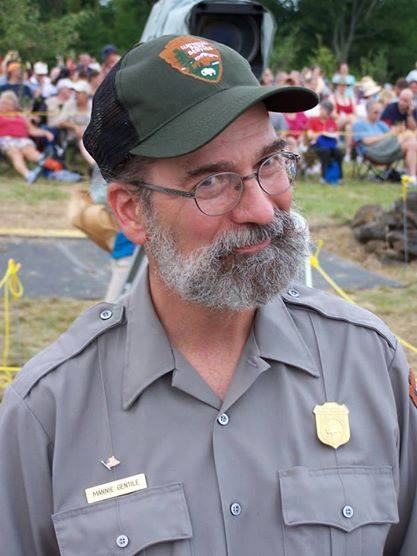 Looking back over fourteen years of Rangering.

On May 28, I will have been with the Park Service for Fourteen years.  Here's some photos. 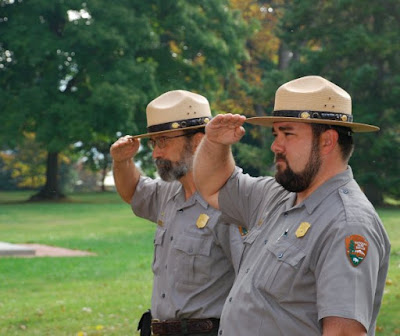 Ranger Alann Schmidt and I during the transfer ceremony of the remains of a New York soldier that were found in the Cornfield at Antietam. 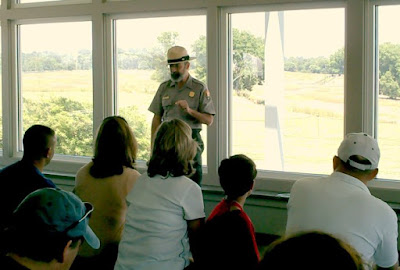 One of my favorite things was giving the orientation talk at Antietam. 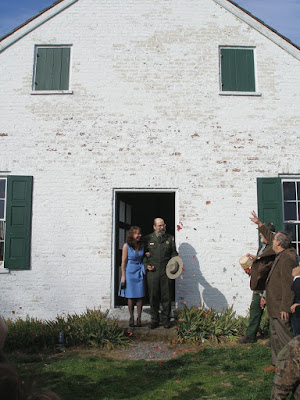 The best day.  Marrying my sweetheart in Dunker Church. 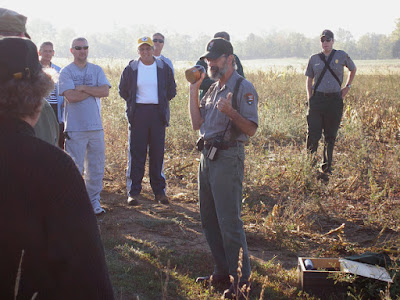 Talking artillery on an Antietam hike. 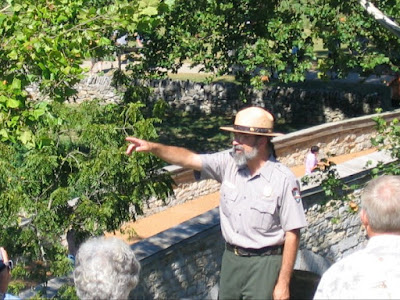 Wrapping up the two-hour driving tour above Burnside Bridge...always my big finish. 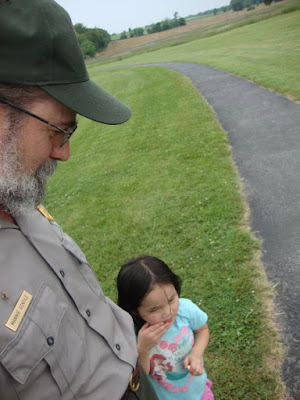 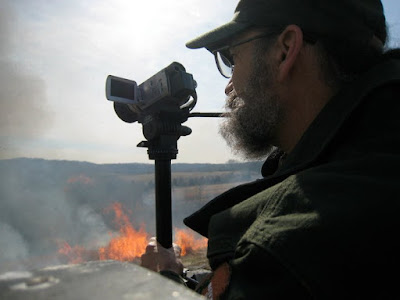 Making a video about wildland firefighting at Antietam. 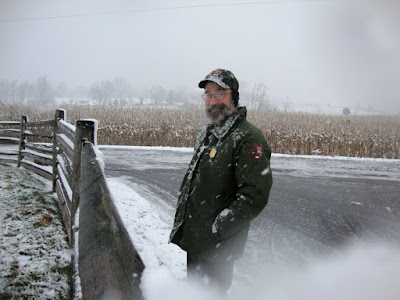 When I was at Antietam, we had a lot of leeway in uniform...here I'm in cargo pants, the Park Service barn coat, and my trusty ball cap. 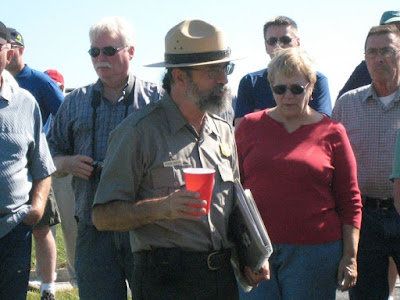 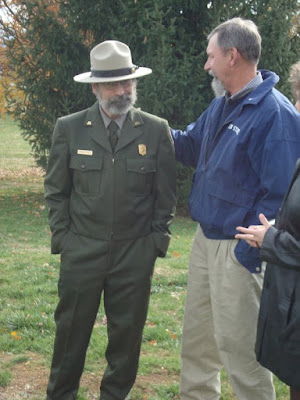 Class A uniform for my wedding and talking to long-time Antietam volunteer Bob Murphy. 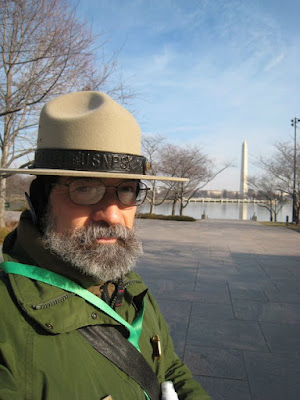 Freezing my tail off at the 2009 presidential inauguration. 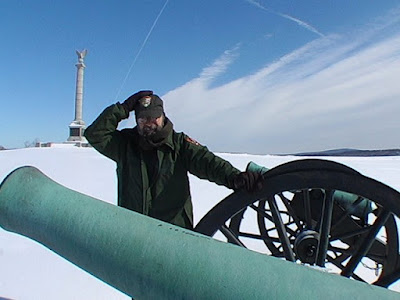 Freezing my tail off at Antietam. 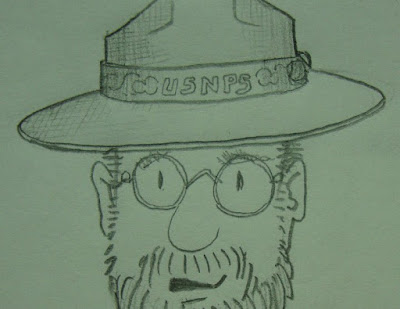 Ranger Mannie in black and white. 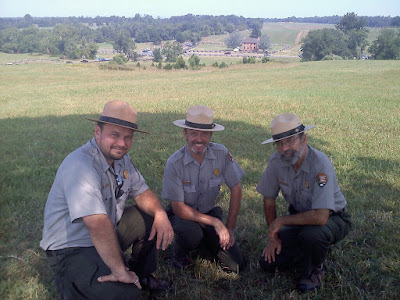 Three interpretive legends:  John Hoptak, Matt Atkinson, and yours truly.  All three of us could really "bring the interpretive thunder." 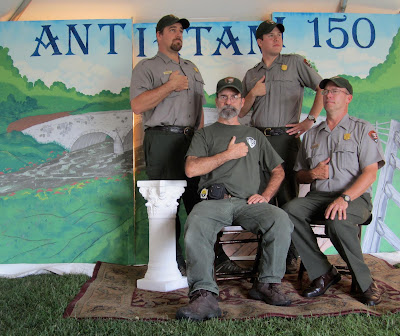 Posing in front of the mural I painted for the Antietam 150th. 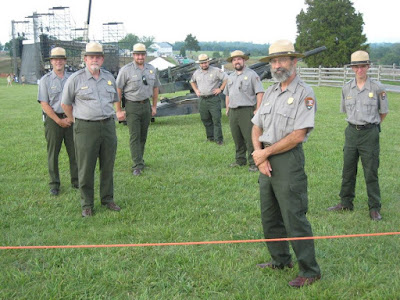 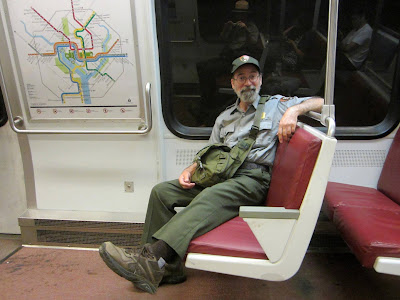 What doesn't kill me makes me stronger.  I commute five hours a day because I work in Washington DC. 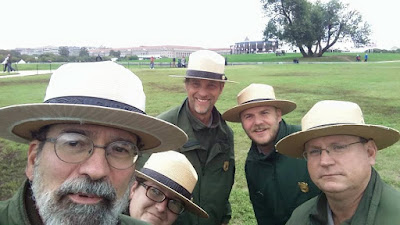 Having a good crew when working the Washington monument made all the difference, and this was one of the best:  me, the supervisor Mary Collins, the legendary Mike Townsend, rockstar Jason Barna, and the incomparable Ed Flemming. 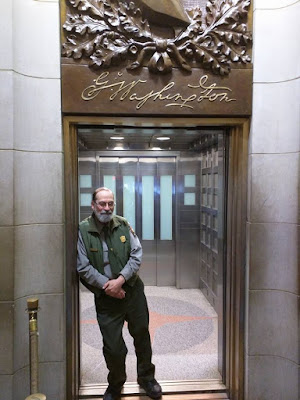 Operating the elevator at the Washington Monument. 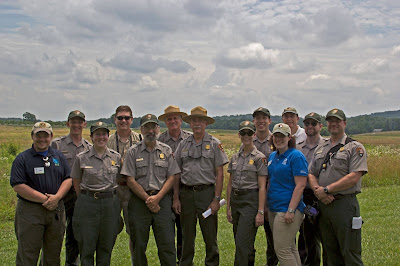 The social media crew for the Gettysburg 150th. NPS director John Jarvis is at center. 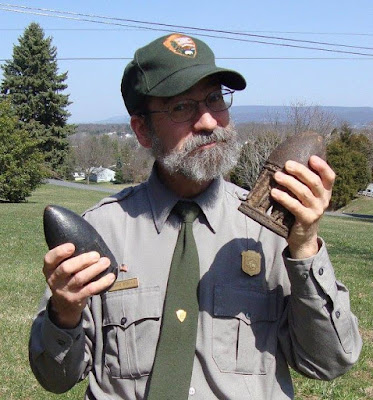 Artillery projectiles were my thing at Antietam. 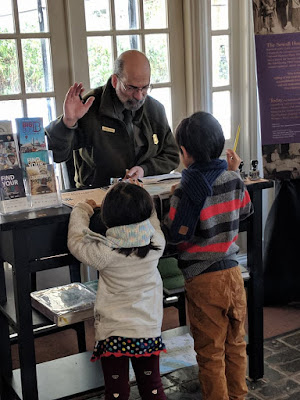 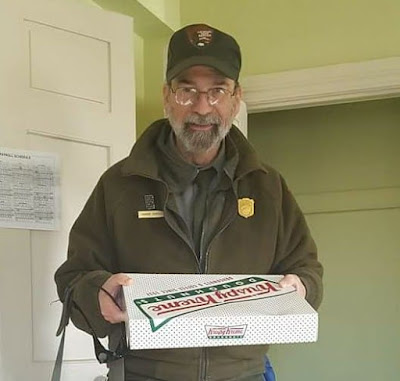 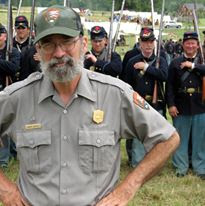 Me and my minions at the Gettysburg 150th 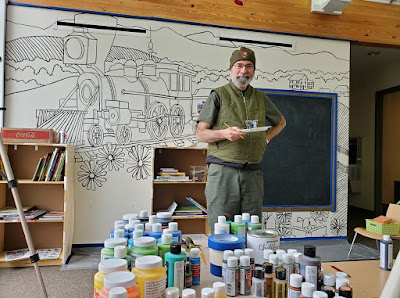 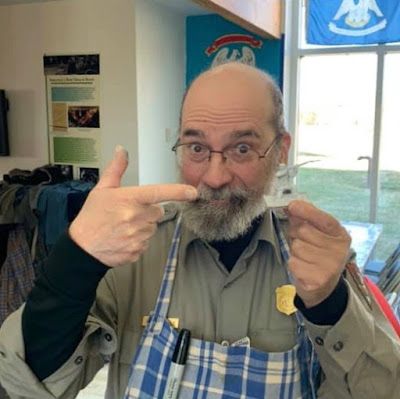 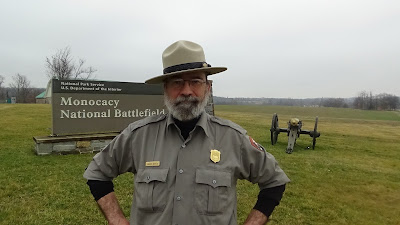 For as much as I loved Antietam, my two-month detail at Monocacy was the most affirming experience of my adult working life. 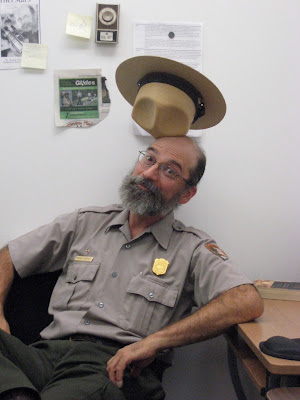 I had a flair for wearing the iconic campaign hat.

Twenty-five days and a wake-up.

Your favorite short-timer is racing to get a couple more videos made before retirement day on May 31st.

At Belmont-Paul Women's Equality National Monument we are working from our homes and one of the projects the Rangers are working on is "Suffrage in Sixty Seconds."  We're each making super-short videos on topics related to the centennial of the passage of the Nineteenth Amendment.

This one talks about the invention of picketing the Whitehouse by suffragist Alice Paul.

Posted by Mannie Gentile at 3:54 PM No comments:

Tennessee and votes for women

It's pretty late in the game gang; ol' Ranger Mannie only has 25 days left, so I'm tying up loose ends and trying to get out a little more historic interpretation before my career with the Park Service come to a close at the end of this month.

At Belmont-Paul Women's Equality National Monument we are working from our homes and one of the projects the Rangers are working on is "Suffrage in Sixty Seconds."  We're each making super-short videos on topics related to the centennial of the passage of the Nineteenth Amendment.


Posted by Mannie Gentile at 3:49 PM No comments: