The Antietam National Cemetery contains the remains of about 4,500 Union soldiers killed during the battles that comprised Lee's 1862 Maryland campaign. When the cemetery was first proposed in 1866 it was the plan of the cemetery commission to rebury all of the dead, Union and Confederate, from their shallow and hasty battlefield burial sites to the permanent resting place of the National Cemetery.

Feelings were still very hot, regarding the "pollution" as one politician said, of putting the bodies of traitorous rebels beside the loyal soldiers of the Union. It became a big political brouhaha with angry accusations, vitriolic editorials, and firery speeches by the radical wing of the Republican Party. The cemetery commissioners bowed to the wishes of the vocal majority and excluded the remains of Confederate soldiers from the Maryland campaign battles - including South Mountain and Antietam - from being buried in the new National Cemetery. 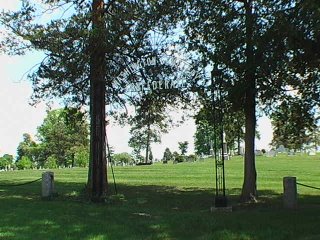 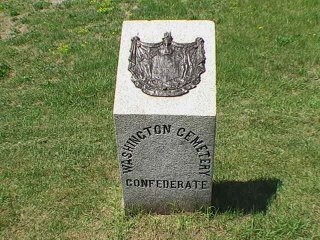 The State of Maryland, a state which sent soldiers to both north and south during that bitter war, stepped forward to find appropriate resting places for the Confederate dead, many of whom hailed from "The Old Line State". In addition to the Confederate cemetery just across the Potomac in Shepherdstown, West Virginia there are also two Confederate cemeteries in Maryland - one in Frederick and one in Hagerstown. 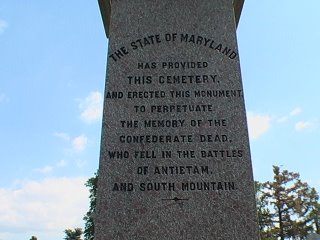 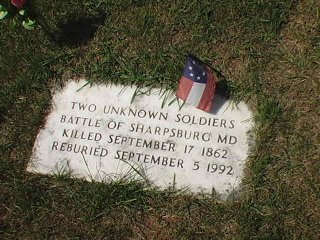 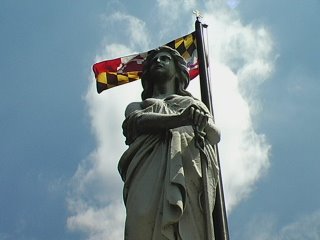 Now, 130-some years removed from the event with all of the vituperative dust settled over the original controversy about whether or not to exclude the rebel dead, a delightful irony inserts itself into the story.

Buried with the "unknowns" at the National Cemetery are undoubtedly some of the soldiers who fought under Confederate General A.P. Hill. These are the men who arrived at the battle in the very "nick of time" to stem the Union drive toward Sharpsburg and certain Union Victory. In 8 hours the hard marching and hard fighting men of Hill's Corps had covered the 17 miles from Harper's Ferry and were spoiling for a fight. While in Harper's Ferry, accepting the surrender of 12,000 Union soldiers, many of Hill's men cast off their ragged, campaign-weary uniforms in favor of captured brand new and unissued Yankee uniforms prior to their advance on Sharpsburg and saving the day at the battle of Antietam.

Among the Union soldiers buried in the "unknown" section of the National Cemetery rest some of these ferocious rebels of A.P. Hill's Corps The men of the post-battle burial parties assumed them to be dead Union soldiers owing to their, curiously new, curiously blue, Union Army uniforms.

History winks at us, yet again.
Posted by Mannie Gentile at 5:07 PM

Your are Nice. And so is your site! Maybe you need some more pictures. Will return in the near future.
»

Manny, thanks I was wondering what the significants of the stone flag on the corner of the wall of the National Cemetery. I saw it yesterday while driving past and wondered why it was backwards and why it was there?