Eleven miles on the canal

From mills to milipedes, this weekend we saw all kinds of cool stuff as we hiked two sections of the C&O canal. We marched eleven miles in all (man are my dogs barkin'). Unlike earlier excursions, the trees and underbrush are now fully leafed out, so who knows what kinds of ruins, tumble-down cabins, caves, or other cool things we may have been walking right past this time?

On Saturday we did six miles beginning at the Antietam Creek aqueduct, another beautiful stone arched aqueduct that carried the canal over the Antietam as it joined the Potomac. Its fun standing on the Aqueduct and watching the swifts darting around catching bugs. There's a picture included of a whole row of little "mud hut" nests constructed by the swifts on one of the aqueduct pediments. It was a beautiful, sunny breezy day and we encountered lots of folks on the tow path.

Today (Sunday) it was cooler and a little overcast, so we encountered far fewer people, but lots more cool and mysterious things. The canal is loaded with puzzles and mystery: "What's this old foundation?, what did these gears do?, where would the towpath crossover have been?, where do you suppose the lock keepers house was?" Its really fun.

Concentrating on the stretch around mile 90 southeast of Williamsport, the first thing we encountered was a cool old grist mill in very good repair. The towpath here is right along the river (Potomac) as the canal boats used this navigable stretch of the river itself. At the same time, about five miles of towpath is semi-permanently closed here due to flood damage. We could tell from the flood debris in the trees overhead that this section of canal is particularly susceptible to flooding. It was, after-all, frequent flooding that kept the canal from being profitable, and a catastrophic flood in 1924 that shut it down for good.

This stretch of the towpath (or "level" as such stretches are termed) is characterized by high cliffs along the path with many caves both large and small. Of the two locks on the level, one still has the scant remains of its gates in the closed position. The operational days of the canal remain in the living memory of few, if any, people these days, and you can only imagine (from these silent ruins and monuments of stone engineering) what the canal's tempo must of been like in its 98 years of operation. 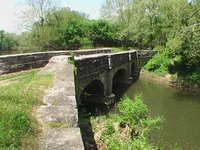 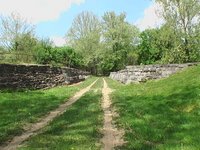 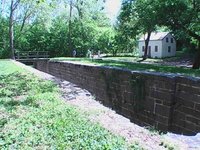 Lock 37 with a very well restored lock keeper's house in the background. 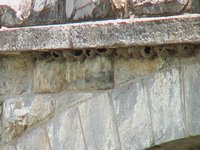 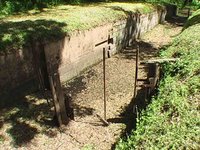 The remains of the wooden gates of lock 41. 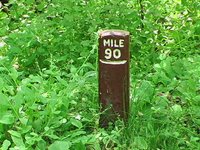 These mile markers on the canal make it easy to log your hiking progress. 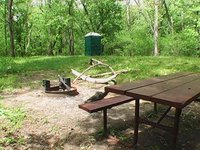 The Opequon Junction campsite is right off the towpath and has everything a camper could desire: picnic table, grill, privy, and a water pump...man, this is livin'! 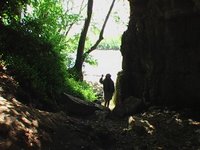 Looking out from within a large but shallow cave. 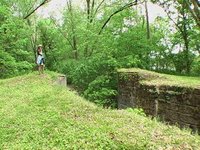 Virginia examines the footings for the old bridge where the mules would cross over. 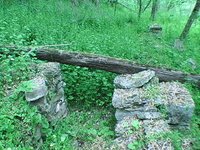 The cellar door opening of the ruins of the locks 41-42 keepers house. 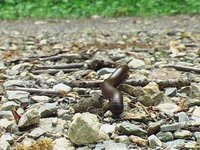 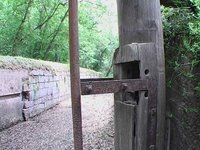 Remains of the lock gates at lock 41. 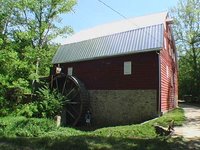 A cool grist mill with the classic "over-shot" waterwheel.
Posted by Mannie Gentile at 4:07 PM