Today (my day off) I grabbed my camera and got on the road to Gettysburg and arrived just a little bit before 7:00 a.m.

Now, Gettysburg has always been important to me, its the first battlefield that I went to as a kid and was very instrumental in forming my early interest in the Civil War. Gettysburg, I've come to realize, has always had (at least in the 40 years I've been going there) the glitz, the fudge, and the tee-shirts that really appeal to kids. And cool stuff like the little stone castle on Little Round Top as well as the giant boulders of Devil's Den are the perfect places to spark a kid's imagination.

However, I think the more sophisticated the learner gets, the less he or she needs the diversions. That's why I've come to prefer being at Antietam. This tranquil and quite serene battlefield isn't as extensively marked with monuments as is the park at Gettysburg, it's much easier to get a glimpse as it was prior to the battle in 1862. Antietam also gets only a fraction of the bus and vechicle traffic of that of our sister park to the north. Unlike Sharpsburg (home of Antietam National Battlefield), the town of Gettysburg is highly developed and commercialized, something often commented on by our visitors who've just come from there. Sharpsburg isn't without amenities however. The one ice cream joint (Nutters) is simply the best and a Mennonite bakery with outstanding baked goods keeps visitors and locals stocked up on good bread and pies.

For a quiet day in a beautiful setting, come to Antietam and experience the countryside the way it looked a century and a half ago.

Okay now the pics, and to be fair to Gettysburg note that the subtitle is differing glimpses of Gettysburg. I took all of these pictures today. As you'll see from the last five shots you can still get away from it all at this great jewel of a park; Gettysburg National Military Park.


One view of Gettysburg: 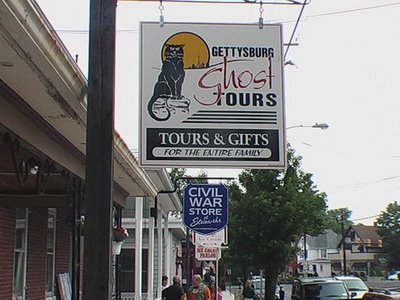 Ghost walks are so abundant I hope the ghosts are getting some sort of kick-back. 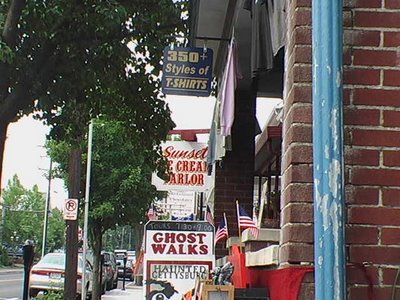 That's "350+" tee shirts, just in case you're travelling with a large group. 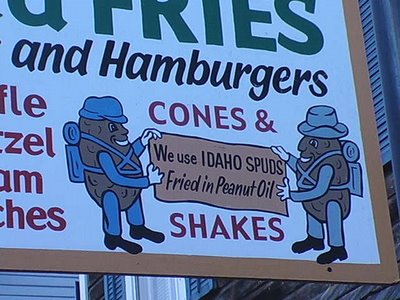 Union and Confederate sectionalism rears its ugly head in Idaho. 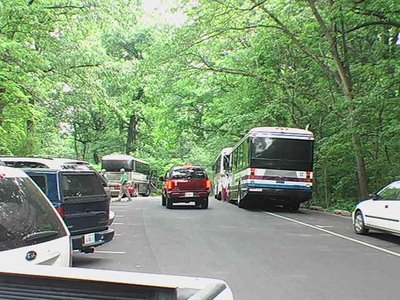 Gridlock on Little Round Top. 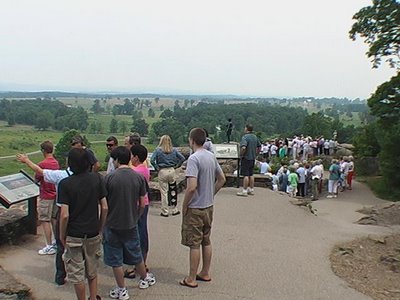 Hey, lookit all the people! As I walked behind each tour group I could hear the four different guides giving similar versions of the same story, like some sort of multiple echo effect. Psychedlic, man!


Another view of Gettysburg: 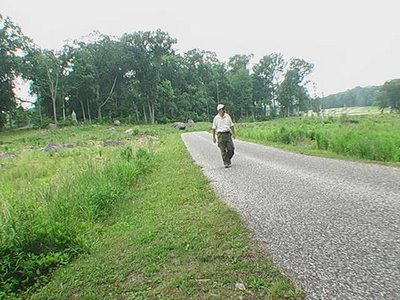 Its not hard to "get away from it all" at Gettysburg. The further you get off the tour bus route the more of this outstanding park you'll have to yourself. 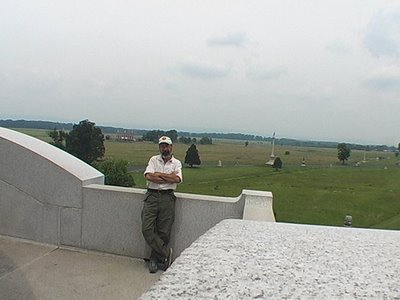 After a long period of restoration the observation deck of the Pennsylvania monument is once again open to visitors. A great view from a great vantage point. And look, I'm the only one up there! 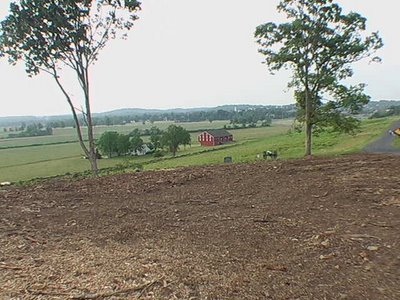 Similar to Antietam, the Park Service at Gettysburg is selectively removing trees and brush to restore the battlefield to the way it looked in 1863. They're doing an outstanding job of opening up vistas that haven't been seen for a century. 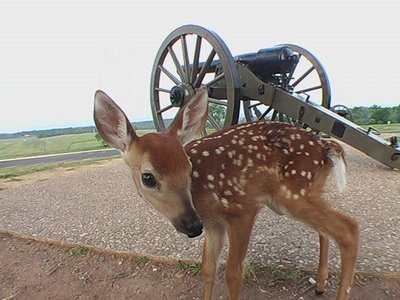 But as this pic proves, wild places still abound on the battlefield. Of course the trick in getting a shot of this cutie was to get to the battlefield by 7:00 a.m. before the tourists arrive.

We've a great system of National Parks. Enjoy them, they're yours after all.
Posted by Mannie Gentile at 3:51 PM