What a difference a hat makes: my first week as a ranger

Forms filled out, procedures to learn, presentations to write and give...man, am I having fun. As all of the other rangers remind me (all the time) this is the greatest job in the world. I asked one of the other rangers (Brian) if there was some sort of basic training program for rangers to learn the rudimentary skills. He replied "There is, it's called volunteering. You did it, I did it, we've all done it. that's how you learn to be a ranger".

So, I guess my instincts were right.

Just as this was my first week, it was ranger Paul's last week. After thirty some years of government service ranger Paul Chiles hung up his stetson. He had nearly three hundred people at his retirement bash including dozens of National Park honchos and just as many best-selling Civil War authors and historians. Paul is nothing short of a living legend and a walking encyclopedia of Civil War information. I'm glad that so many of my volunteer days were spent at the front counter with him where I could listen in as he dispensed knowledge to visitors, volunteers, and rangers alike. 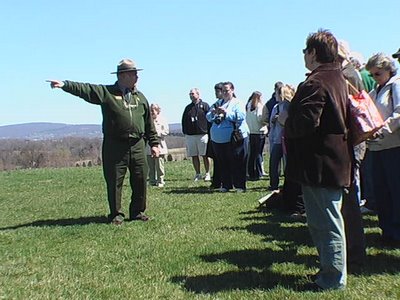 Here's a characteristic pic of Paul explaining the battle of Antietam to appreciative visitors.

Just across the street from the entrance to the battlefield is an unimposing ranch house that was sold a few years ago to the park service. Its the same house that for years my wife used to point to as we'd drive past Antietiam and say "wouldn't it be great to live THERE!" That's now where my desk and bookcase are. 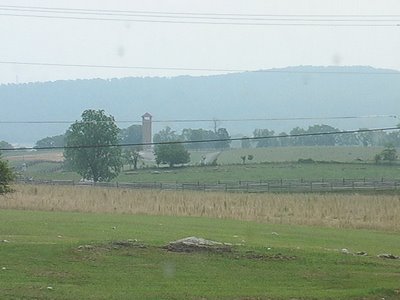 This is the view from my desk taken early on a foggy morning. That's the tower at the sunken road in the near distance and Elk Ridge in the background.

Like every other new ranger, I started without having a uniform of my own. I was directed to a huge closet of shirts and trousers that earlier rangers had outgrown or abandoned over the years. By lunch of my first day I was completely tricked out in second hand trousers and shirt, an abandoned hat, and a borrowed hatband and badge. I haven't worn this many hand-me-downs since I was seven years old. Hopefully, the stuff I've ordered should be arriving this week.

At the end of my first day, thinking about what I'd learned so far, I realized that wearing that hat causes people to take everything I say at face value.

I'll keep you posted.
Posted by Mannie Gentile at 4:12 PM