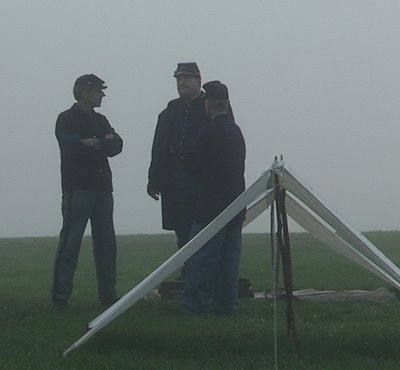 What a remarkable weekend.

The rangers were primed and prepared, the visitors were brimming over with enthusiasm and purpose. Our tour and hike participants, many, seasoned veterans of earlier anniversary hikes, gathered in the early morning fog, greeting each other with smiles and nods. The hikers, young and old, consisted of a mix of true pilgrims and folks who just happened to be travelling through the area. As the cooperative fog began to lift, much as it did that very day in 1862, the Antietam battlefield revealed itself as it has on 143 previous anniversaries of the battle. And the hikers stepped off - forward...into the past.

Visitors were hushed, rangers were earnest, all ears seemed to be tuned to far away echoes as the early morning curtain of mist was drawn back. The magic portal of Battle Anniversary was again opened, allowing all of us to briefly glimpse the red landscape of the Antietam battlefield in mid September. 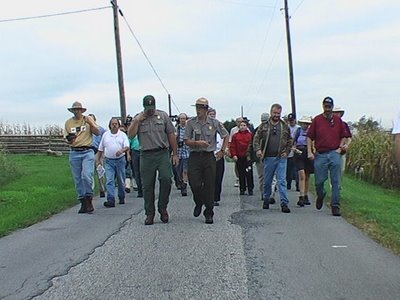 Seasoned Rangers, Keith and Brian lead visitors on the early morning Cornfield hike. Keith, a master storyteller, often simply let the quiet of the moment do the speaking. It was a morning of goosebumps and revelation. 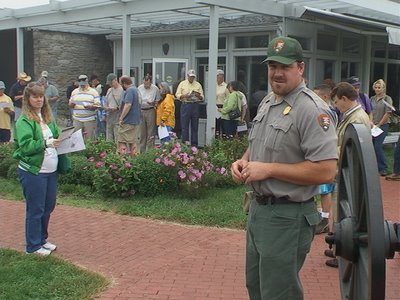 Ranger Brian is stoked as his Sunken Road hike participants ready themselves for the journey back to the lost opportunity of the Bloody Lane. 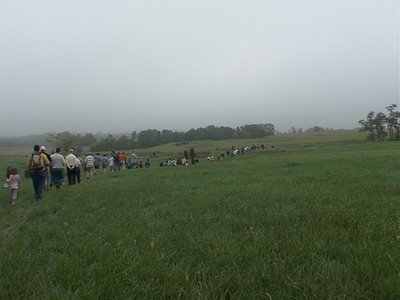 Ranger Brian's Sunken Road hike snakes off into the distance, tracing the long, long, Union line. This was a morning when even the most jaded arm-chair general was humbled by Brian's demonstration of the overarching power and authority of the terrain in determining the outcome of this battle.


Yes, a remarkable weekend. I'm so glad to have been a part of it.
Posted by Mannie Gentile at 8:05 PM