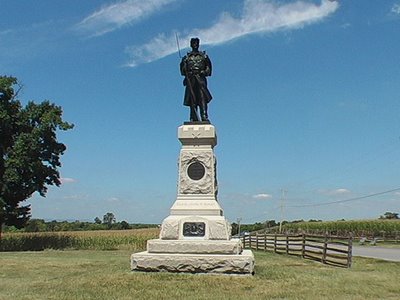 Yesterday I had this conversation with a visitor (with a Carolina accent) regarding the soldiers of Lee's Army of Northern Virginia.

Visitor: "Where these guys stupid?

Visitor: "What kind of education did the rebs have?"

Visitor: "Well, with the way they fought, seems to me they had had the hearts of lions but were stupid as piss-ants"

Me (lamely) : "Well sir, though I wasn't there, I'm sure that these men were as intelligent as you or I".

I guess the most common comment that I get from a wide variety of visitors is the old standard "Why did they fight that way?" often followed up with "Were they stupid?".

The question is framed in such a way as if to imply that the soldiers of the Civil War were somehow a species inferior to us. Not nearly as sophisticated as we are, and certainly less adept at reading the tour map as we are.

Ouch, What a way to treat the people who have gifted us with our history.

I often respond to the question of why soldiers fought in straight lines, standing up, 50 yards apart from each other, by explaining that tactics followed technology, and the breechloader would eventually lead to a different type of warfare. Usually this clicks with visitors, which is a nice teachable moment. But still, I'm often struck by the lack of empathy that many people today have toward the soldiers of the Civil War.

Have we become so reliant on GPS, cel phones, and e-mail as to expect that two tired, bewildered armies - arriving on ground unknown to either side would perform as if they had all of our modern advantages? That's both shortsighted and funny (sometimes).

Recently at the Sunken Road, a visitor gestured to the Roulette Farm lane (which intersects the sunken road) and scolded: "Well why didn't the Yankees just come up through there?". I responded with "Sir, five minutes ago, did you know of the existence of that lane?...neither did the Yankees. Imagine how the outcome of this battle could have been altered if either side had dropped by the visitor center first." This gets a laugh.

Judging the actions and motivations of Civil War soldiers against the context of our 21st century experience does a great disservice to those men, blue and gray, who fought in that war. It seems to dehumanize them, make them somehow less than we are.

An equally dehumanizing disservice is done when the World War Two Generation is marketed as "the greatest generation". Somehow removing that generation from others, elevating those men and women above those earlier generations or those yet to come.

I like to remind visitors that all of our soldiers, past, present, and future, are as brave or as cowardly, as noble or as petty, as funny or as humorless as we are. To pretend otherwise is to cheapen the efforts of those who have given us our history as well as those who will continue our history.

Let's take our heroes down off their pedestals and remind ourselves that the heroes are among us right now, some with degrees, some without, some with great virtues, others without.

American History is made by Americans, warts and all.
Posted by Mannie Gentile at 7:55 PM

Great post! I always shake my head when writers excessively chastise officers for taking the wrong road. It's actually pretty impressive that everyone pretty much got to where they needed to go using unmarked roads and trails and guides who were often unknown quantities.

Thanks for the comment. I have to wonder what they called "Monday morning quarterbacks" in the days before football.

I have some Civil War art hanging in my office. The most common comment I hear is “those guys were crazy.” or “stupid”. While I have never used it, the best response might be, “no, you are just uninformed”.

I particularly liked you comment that “heroes are among us right now”. I often think about how people like Lee and Grant would be unknown to history if the Civil War never happened. People as great as Lee, Grant, Meade and Longstreet could be behind you in line at Walmart.