Saturday brought over 1,400 volunteers to the park for the 18th annual illumination,
an incredible event that transforms such mundane objects as paper bags, cups, candles, and some sand into flickering representations of the 23,110 men, killed,wounded, or missing, during the battle of Antietam. 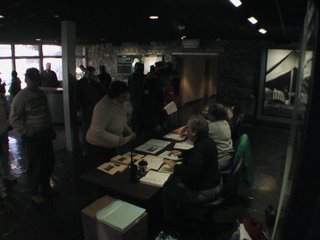 The morning was just beginning and volunteers were already arriving, registering and getting their assignments. 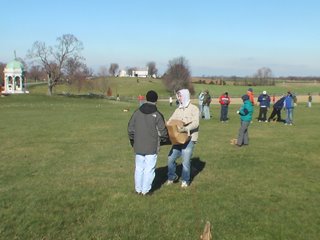 In the chill sunshine materials were distributed... 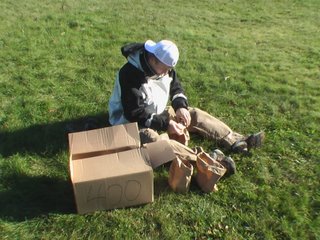 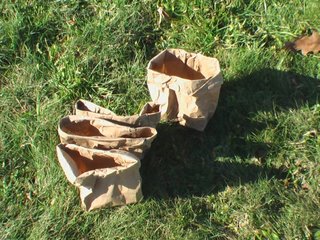 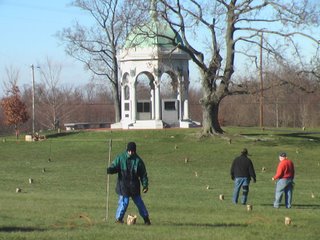 ...and laid out in long lines, in grids, throughout the northern half of the battlefield.

It was quite remarkable how quickly and efficiently the volunteers were able to complete their designated areas. Even more remarkable was how fast they got them all lit, about 45 minutes, and suddenly everything was ready for the proceedings to begin and the sun to go down.

The opening ceremony, which was held at the Maryland monument, included a choir and remarks by the Secretary of the Interior. And then, about five o'clock, a magical thing occurred. 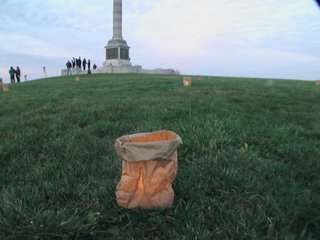 The luminaries, which had been lit for an hour, started to faintly glow as the ambient light of the early evening receded. 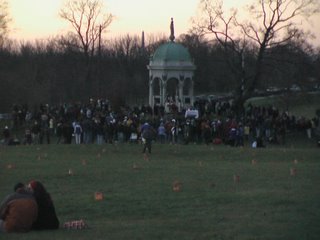 The ceremony continued, and all over the field the luminaries were gradually overtaking the oncoming darkness. 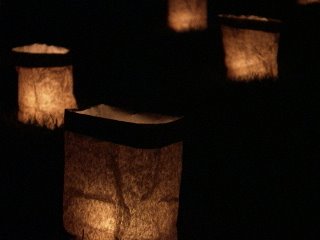 It is as if, for one night each year, the battlefield is revisited by 23,110 soldiers, who in 13 hours of fighting were wounded or killed in this long ago battle. 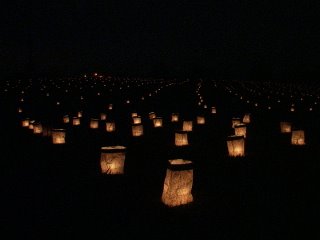 Literally, as far as the eye can see, the candles burn through the night, continuing long after the thousands of visitors have slowly driven through the park in long, long lines, to view them. 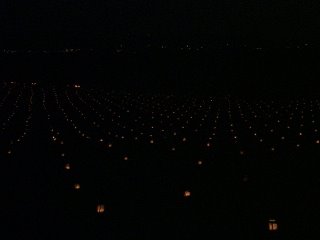 The firewatch is posted in the observation room of the visitor's center; the Rangers watch and wait throughout the night. Eventually around 4:30 in the black of the late fall morning, the candles begin to flicker and die. Some continue to burn, struggling on against the darkness, but by five o'clock it is all over.

Another thirteen-hour battle, against the darkness, comes to an end on the fields of the Antietam Creek Valley.
Posted by Mannie Gentile at 12:10 PM

This event is something that I want to attend in 2007. This year, my sister, who lives in Frederick, drove through. I am in Connecticut, but will try to arrange to go next year. We were wondering about volunteering to set up the candles. Do you know who we would contact about this?

This event is something that I want to attend in 2007. This year, my sister, who lives in Frederick, drove through. I am in Connecticut, but will try to arrange to go next year. We were wondering about volunteering to set up the candles. Do you know who we would contact about this?

I couple of years ago I was one of the re-enactors who stood watch as a federal by a fire near the west woods. It was the year there was about 4 inches of snow on the ground. I must say that with out a doubt this event was one of the most moving and spiritual that I have done in ten years in the hobby. It gave such a perspective on the cost of this battle. Which was my late fathers favorite, where he would bring us as children. I'd like to stand by that fire again sometime.