Been to Gettysburg of late?

The park north of here continues to undergo a major makeover of historic proportions. Gettysburg National Military Park is making great strides toward restoring the battlefield's appearance to that of 1863. It looks a little rough right now, but after just one or two seasons it is going to be well worth the effort for the visitor and the interpreter alike. 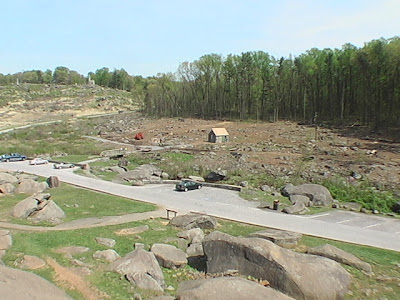 This is the view from Devil's Den looking toward Little Round Top. That little outhouse and the land behind it have been hidden from view for generations. All over the park scrub and forested areas are being removed or thinned, giving breathing room to the remaining "witness trees" and leaving the surrounding terrain just as the soldiers saw it during those three days in July.

It's always nice to see our tax, and preservation, dollars paying off. Hats off to our colleagues up at the big park.

P.S.
And do come visit America's most pristine battlefield park - Antietam.
Posted by Mannie Gentile at 9:11 AM

You're right, the changes have just been amazing. Even when you previously tried to imagine "the trees not there" - you still couldn't see it that way you can now. Especially in the middle part of the field - I now feel like I have a whole new battlefield to play with now.

I and some pards will be down to Antietam in late June - we'll try to look you up.

Thanks for the picture. I would love to see more! I hadn't seen any images of the clearings before and haven't visited the park since they were initiated. I bet the rangers are already tired of the "who lived in that cabin?"-type questions..LOL.

I presume it will be relocated?