Reunited, and it feels so good: The Brothers Bruce (just joking)

Four old friends, who hadn't seen each other in two decades once again mounted a stage to rekindle their salad days, you may have heard of us, "The Scapegoats" (o.k. ask your mom and dad).

It seems a lifetime ago that Jean-Claude, Ernie, Destry, and I first got together in our high school cafeteria to combine our mutual interests in the Civil War, girls, and barbershop harmonizing and started our vocal group. As "the Cattons" and then later as "the Brothers Bruce" we headlined all of the important hops, proms, and socials at good old John Singleton Mosby High School.

This was 1969, the Vietnam war was raging and so were our hormones, and believe me, everything they say about being in a band is true when it comes to the ladies, or as Destry used to say - "the ladeeze". These where still the days when you could get a room full of girls gyrating to covers of the Buffalo Bills' hits, "Lida Rose", and "Where is the Sin in Sincere?".

As barber shop began to fade, we moved on, stayed hip, and embraced the do-wop scene. This brought another name change, and, as "The Americans of Heritage", we toured the legion halls in the tri county area and did a lot of swell society and country club gigs.

As we matured, so did our taste in music as well as our individual interpretations of Civil War history. We started turning away from the squaresville establishment types (even denying that we had once been "The Cattons") emulating instead the trendsetting bands like "The Marvels" and "Ethan and the Refusers".

Togged out in really mod rags from Carnaby street we sported outlandish muttonchops and dubbed ourselves "The Scapegoats". We wuz rockin' and the party wasn't stoppin'!

We got "discovered" at the Hap Arnold/George Romney birthday bash and actually got a contract for a record deal. This was the big break!

The "a" side hit was "Plenty of Dames to go Around" penned by Ernie and Jean-Claude, while the "b" side was Destry's whimsical "Gimme Some New Thinking, Baby".

The release was followed by three solid weeks of euphoria. Life was just a landscape turned groovy.

Sadly, it all came to a very abrupt end by the events that inspired our final recording "Super Max Anti-Climax, Baby"...Destry and I got drafted, Jean-Claude embraced his French Canadian Quakerism, and Ernie went to law school.

As the years rolled by we had pretty much lost contact with each other, and just got on with our lives. But there was a rockin' rythym still resonating in our souls that would not be denied, I started looking for "the lads".

Our "aquaintenceship" was rekindled (we'd always been pretty chilly toward each other, even back in the day) and we resolved to seek out Jean-Claude and Ernie.

With the miracle of the internet, parole-board records, and the musicians union we tracked down the boys. We met up in cyberspace and before long "The Scapegoats" were talking about the good old days of barbershop, do-wop, dub, and our final foray into Tibetan throat-singing (oops!). It made for great conversation, and we resolved to stay in (cyber) touch.

Then three months ago Destry phoned to sound me out about getting back together for a reunion concert. At first I thought he was trippin', but in his signature iconoclastic manner he convinced me, as well as Ernie, and Jean-Claude that this would be a great affirmation of mid-life crisis as well as an opportunity to get to the Antietam Battlefield on someone else's nickel. We were sold!

The venue was the third annual Keedysville (Maryland) "Soundsation Spectacular and praise-a-thon YES! 2007".

The day was perfect and so was the vibe. We mounted the stage and harmonized our hearts out in front of a crowd of upwards of fifty or so sixty-somethings. We kicked it out with our old hits as well as two new pieces we whipped-up just for the event - Ernie and J.C's "Hoofbeats Across my Heart, Baby", and Destry's wry "Centennial Serenade". The crowd was a little reserved at some of the more cryptic passages of "Serenade" but we won them over with a really cranked-up "Hoofbeats".

With the applause still ringing in our ears we piled into Ernie's rockin' Winnebago and laughed ourselves down the 34 to Sharpsburg. We four amigos pulled up triumphantly to the Antietam Visitor's Center and had our picture taken together for the first time in 33 years. 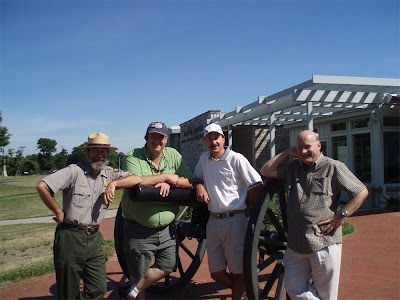 Rock on brothers and sisters!

Ranger Mannie
Posted by Mannie Gentile at 1:32 AM

After all these years, my baritone remains woefully out of tune, for which I apologize. At least you let me continue to sing. :-)

I think the four of you spent way too much time in the 40 acre peyote field.

You're just jealous you weren't there to partake in the peyote with us....

And for those who sometimes don't ge the joke, this post, including the comments, is just a joke, just a little humor to lighten the burden.

Probably a good thing I didn't have my hat off for the picture... the sheen off my head might have ruined it.

Til the next song in the wind,