More pictures and notes from the trip Ranger Hoptak and I took to Bull Run last Wednesday. (click on the title above for John's version of what happened). 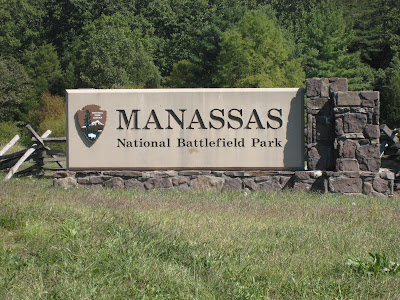 John and I are ready for a day of hiking. 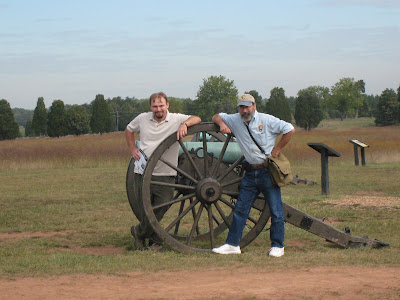 Many years ago colleague and pal Ranger Keith worked at Manassas.

He likes to regale us with a dramatic telling of a story of the Jackson monument being hit with lightning. Keith saw the whole thing and insists that the bolt left a distinctive scar on the pedistal of the monument. 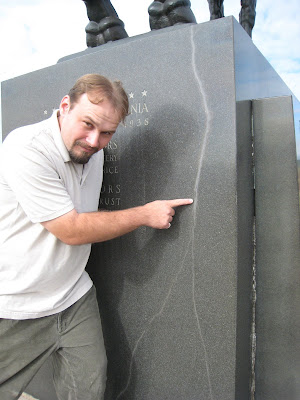 Manassas has a very nice array and variety of guns, and being a cannon-weenie I have a hard time passing up such shots. Here are three (or so ) batteries of six-pounders, howitzers, and rifled six pounders; all bronze. 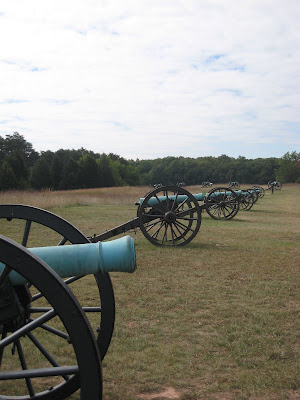 A low angle shot of the Stone Bridge, a really beautiful piece of construction, as is... 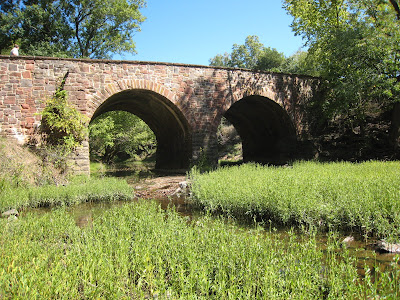 ...the stone house down in the valley. This shot makes evident the pressures on the park by its proximity to Washington D.C. The traffic at this historic intersection of the Warrenton Turnpike (Hwy 29) and the Manassas-Sudley Road (route 239) is generally heavy to intense. Fortunately for hikers there are crosswalks. 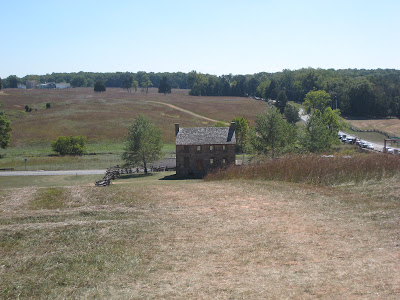 A couple more fine looking batteries up on Matthews Hill. These are bronze 14 pounder James rifles. A very distintive style of gun. At first glance they look like elongated 3 inch ordnance rifles...except they're bronze, which may cause one to say "Hey! what gives?" 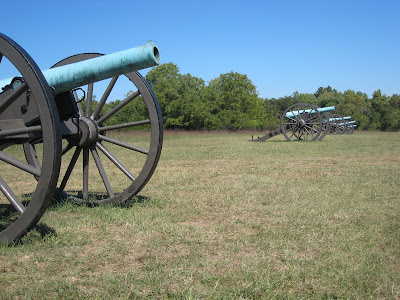 Closer inspection reveals the pronounced front blade sight as well as the unique James system of rifling. These are really handsome guns, and represent the type that were used in this particular position. 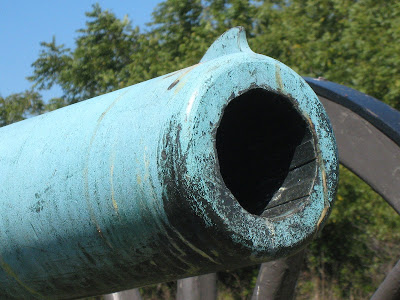 The trunnion provides a manufacture date. All true James rifles were produced in 1861 and '62. 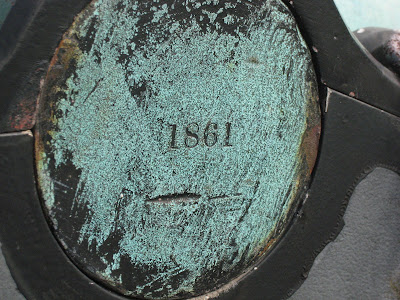 For much of this trip John pelted me with anecdotes about his beloved 48th PA and the minute details of their involvement at Second Manassas, prelude to their single-handed victory at Antietam and all historic points beyond.

Following about a dozen of John's breathless accounts of the 48ths exploits I found certain unwholsome thoughts creeping into my mind... 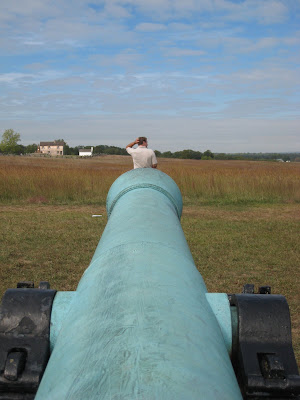 ...but, I digress.
Manassas is a park that I've visited perhaps a half a dozen times in my life. This recent trip was an eye-opener. Never has the flow of the first battle been so clear to me. John noted the same thing and between us we came up with three reasons for this new clarity.

Ranger Hoptak's suggestion was that now, as interpretive rangers, we probably approach historic places with a whole new perspective that lends itself to reading the space critically.

I opined that this clarity comes from the unhurried pace of the visit. Previously for me a trip to this battlefield would have been as a tourist coming from Michigan, trying to rush to as many Civil War sites as my vacation permited. Now that I live in the region there is no longer a rush. I can soak it in at a very relaxed pace.

We both agreed that the primary reason for this new clarity had do do with the on-going changing physical aspect of the park: 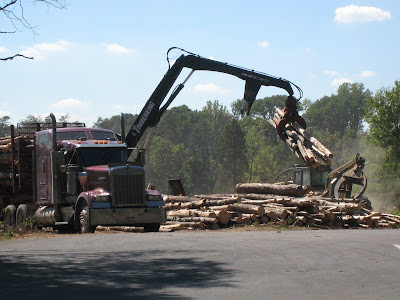 Huge non-historic tracts of trees have been and are being removed from the park to restore the field to its war-time appearance. We arrived in the area of the Deep Cut (stop 6 on the driving tour map) to find the area closed and three huge trucks pulling out with full loads of newly felled and trimmed timber. 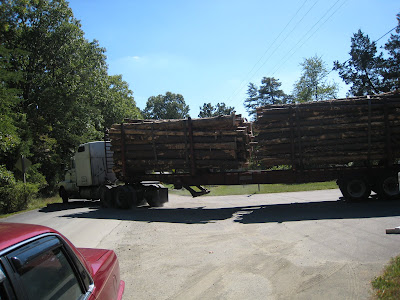 The results will be pretty dramatic.

As evidenced in this shot Between Matthews and Buck Hills. The cut-over patch in the foreground used to resemble the trees in the background, which, I believe, are also slated for removal. 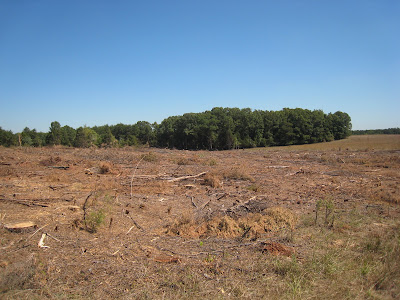 The result being unobstructed viewscapes and a field more closely resembling the way it looked in 1861.

This is now the view from the Henry House across the valley clear to those James rifles on Matthews hill. 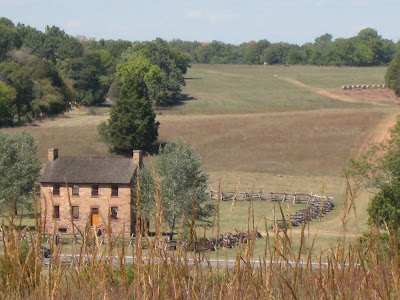 This is one of few reasons that I can think of to cut down healthy trees. I applaud the park's decision to move in this direction.

A final stop at one of my favorite Civil War monuments, and one of the earliest, erected just a couple of months after Appomattox. This simple stone testimonial, erected by soldiers, I find to be particularly evocative. 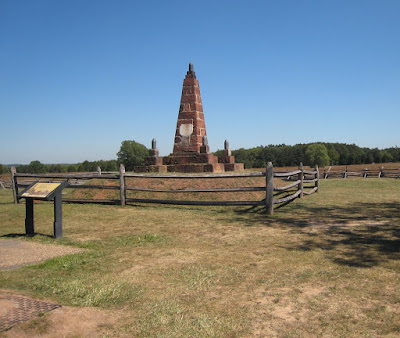 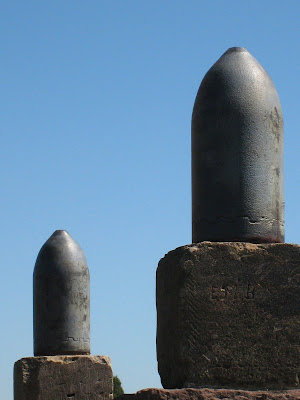 Surmounted by projectiles (the originals were said to be "live" for many decades following the war) this rugged structure sits atop Henry House Hill, 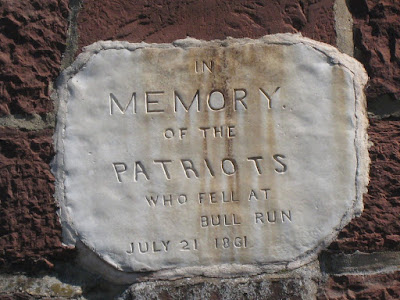 which could just as easily be the mission statement of the park itself.


It was a fine visit.

Ranger Mannie
Posted by Mannie Gentile at 9:55 AM

And you thought I made up that story about the thunderous crack of lightning, the blinding flash and Jackson glowing in the electrically charged air on a hot summer afternoon.