Us Old Guys can "Live the Adventure" too

Yesterday at the park as the day was winding down a gentleman approached me at the front counter. I'd sold him a ticket early in the morning and had seen him from time to time throughout the day.

We chatted each other up and his story had a familiar and comfortable ring to it: Kids grown, chucked his high-pressure job, foot-loose and fancy-free, loves the National Parks and Civil War history.

"Is it reasonable to hope that someone my age could do what you're doing?" was his question.

Noting that we appeared to be about the same vintage I told him what I tell everyone who asks the oft-asked question of "how do I get a job as a ranger?"

Identify the park you think you'd like to work at and join their "Volunteers-in-Parks" program. That's how I started, that's how a lot of us started. Let them get to know and love you, Let them know that you are interested in becoming a seasonal ranger. If you've already demonstrated to the person who'll be doing the hiring that you posess the skills, savvy, and magic that the job requires then you have a great advantage over all of those applicants who are unknown quantities to the park.

I asked if he was a veteran, and yes he was, with a combat related disability, no less. That will shoot him to nearly the head of the line of qualified candidates.

I also let this fellow know that about 90% of the ranger force is made up of seasonal rangers like me who are all trying to find that invisible rolling rabbit hole known as a permanent or "status" position.

Then he asked how does one go about getting a permanent rangering job. At that, I shot a sidelong glance at my friend and fellow seasonal, ranger John and said:

If we figure that one out we sure as heck aren't telling YOU!

It was all pretty jolly. We wished him luck. I expect he'll get lucky down the road.

I also recommended this publication put out by the Association of National Park Rangers: 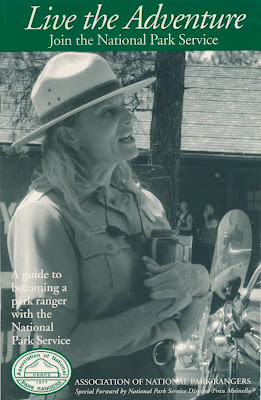 Good luck to us all!