Never one to pass up the bandwagon...

A remarkable photograph has just come to light at the National Archives which has the blogosphere, as well as the print media totally a twitter.

This may very probably be a much sought after and long-mislaid production still from the classic John Ford western "Stagecoach". 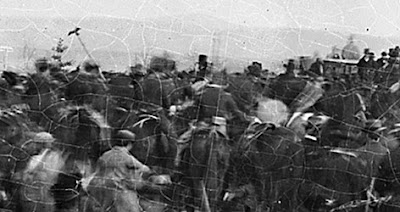 Despite the deterioration, the actual "stagecoach" can be seen to the right. Note also, the fairly primitive boom microphone towering above the extras and production crew to the left. 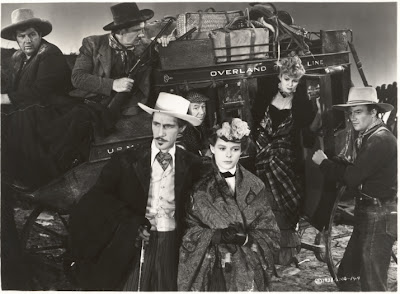 This still of the 1939 film seems to confirm that the coach in the newly discovered photo is the one from the movie.


As to the identity of the man on horseback with the tall black hat, at first I thought it was actor John Carridine, though examination of his hat in the photo above clearly takes him out of the running (and dosen't Claire Trevor look lovely?).

I was able to eliminate Tim Holt and Andy Devine as well. It was becoming more and more likely that the horseman was the "Duke" himself! Ladies and gentlemen...Mr. John Wayne!


Sadly, this photo of Wayne in his "Stagecoach" role as the Ringo Kid, eliminated Duke as the mystery horseman. Not only is his hat white (or mouse gray) . but he's riding in the stagecoach and not astride a horse. 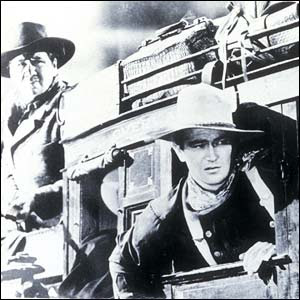 You can only imagine my dismay when the hat of Thomas Mitchell, the dipsomananical "uncle Billy" of the Capra holiday classic "It's a Wonderful Life" revealed him as the man on the horse. 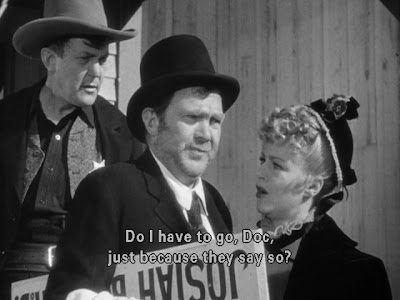 Much ado about so little, but hope springs eternal when it comes to John Wayne.

Mannie , my side hurts from laughing out loud over the Stagecoach story. Say it ain't so that it is really Thomas Mitchell in the photo.
Susan Sweet

That is the most BRILLIANT post that I've ever read on this subject. Well done Mr. Director!