I salute the worst Civil War movie ever made 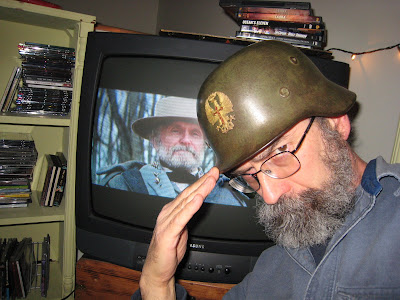 The cool thing about "Gods and Generals" is that not only is it the worst Civil War movie ever made, it's also the worst movie ever made.  Finally I've found a movie that is worse than "Adventures in Babysitting", " The Dirtbike Kid", and "Oscar"...combined!
This crazy five or six or nineteen hour slog through poor direction, Jeff Daniels' larger-than-life jowels, and slaveocracy apologia is the nearest thing to purgatory on earth, even for this non-beliver!
Do note Steven Lang's portrayal as Forest Gump in the Christmas Eve scene.
A friend loaned  this movie  to me with the caution that it's a stinker, which I was fully aware of as I viewed  half of it in the theater when it was first released (I left at intermission).
Above is my impression of  fascist Francisco Franco's salute to a really stinky piece of bogus history.
With Boo Radly in the background giving his interpretation of Robert Duvall's impression of R.E.Lee's take on reality according to director Ron Maxwell I can only exhort...
No "Last Full Measure" por favor.
Mannie
(nice Spanish helmet, eh?)
Posted by Mannie Gentile at 7:50 PM

On the plus side, Ted lost a bundle.

I tried a couple of weeks ago to write down some of the really bad dialogue in this movie; but in the meeting between Jackson and Jeb Stuart the lines were coming so fast I couldn't keep up. When me and my wife saw this motion picture at the movie theater we kept waiting for Jackson to die. All through the last half hour I kept saying over and over again "just say the words, just say the words". ("Let us cross over the river and rest under the shade of the trees", supposedly Jackson's last words.) It seemed like that line would never come. Until Paris Hilton makes a Civil War movie this will have to be the worst.

Actually "Alvarez Kelly" is pretty disappointing also. Take a great story like the Great Beefsteak Raid and turn it into a lame love triangle. As a bonus Richard Widmark portrays Tom Rosser with an eye patch like a pirate!

Boo Radly in a coma as Robert E. Lee.

C'mon Mannie. You have to give Stephen Lang his props. Jackson's part was very inspirational from a Christian POV. However, I'll admit the overall product was a bit overdone and Chamberlain's Shakespearian rant before the battle was very hoaky. However, to a devout Christian-Confederate enthusiast like myself, battle flags and bible scripture, recalling historical places and events in the town that I live in (Fredericksburg) was a great way to spend 5 hours. We Civil War bible-thumpers loved it and the rest of the world didn’t. Perhaps Maxwell should have released it in the church community. I would still love to see the Director’s cut which included your battlefield at Antietam too. That should never have been cut. Either way to each his own. BTW: Great helmet!

So Mannie, how do you really feel about this movie?

Hopefully this one did badly enough that there won't be a rush to put the rest of Jeff Shaara's books on the big screen.

Still ticked off because you didn't get a special cameo appearance...ehh?

I agree. But I love the beginning with the state flags and the song.