Fire on the Mountain: Bondurant's battery at the Battle of South Mountain 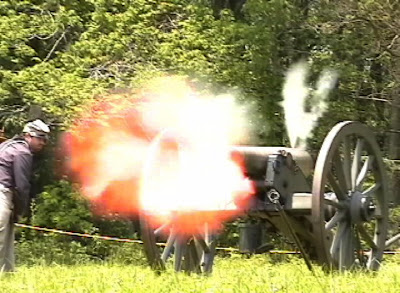 This past weekend I went up to Fox's Gap to watch a spectacular program put on by our colleagues at South Mountain State Battlefield. Six Confederate guns were doing battle with two Union guns, on the actual battlefield. This was a first (since the battle that is) as the field in question, with its panoramic view and astounding echo, is private property. The land owner was gracious enough to allow this event and seemed to enjoy it immensely as did the audience of about 60 spectators.

My Ranger hat's off to the Maryland State Park Rangers who made this incredible event happen. Let's hope it can become a regular event!

Here's a little video I put together this morning that captures just a fraction of the excitement.

Thanks, by the way for all the complimentary comments regarding the storm cleanup effort at the park, I'll pass your kind words on to the folks who did the hard work.

LOL. Were those car alarms going off in the background? :-)

Yes, nearly every time the guns fired one particular car alarm would go off.

I always wonder with all that black powder and sparks in one area...are extra precautions taken with swabbing, safe distance, time between discharge, et al?

It could ruin a great day to be half finished loading a gun and encounter an ember...