The heritage door swings both ways

I know that the Confederate battle flag of Civil War days was, usually, square, unlike the two segregation era rectangular ones mounted on the pickup truck that went spraying gravel down my otherwise quiet road this evening.  The three would be Nathan Bedsheet Forrests in its cab were regaling our quiet mountainside neighborhood with post-adolescent rebel yells and other such fiercesome uulations.  Yikes!
Happy Juneteenth, Boonsboro!

----    ----    ----    ----
Today at the battlefield I was involved in a very long conversation with a very enthusiastic visitor who had lots of questions and interesting opinions as well as many shop-worn assumptions about the battle of Antietam.  He was asking those questions that always seem to begin with; "Were they stupid back then..." usually referring to the manner in which mid 19th century soldiers fought, or "Why didn't General_____ just..." the preamble to an assessment of the, now obvious, mistakes made by Union or Confederate field commanders.
I always enjoy these conversations as they are opportunities for a good discussion of how a little humility can go a long way in trying to understand or interpret the events of the past.
It was a nice conversation, but then it took, quite out of the blue, an awkward turn which caused me, in my capacity as a public servant, to have to find other things to attend to.
The gentleman was telling me of his membership in a very cool sounding Confederate Cavalry reenacting group, and not one of those dopey "dismounted" organizations, this guy's group was the real deal with horses and everything.  He went on to say how they got to participate in the Tournament of Roses parade in Pasadena a few years ago, and how exciting that was.
Then his face clouded and he said "But, of course [of course], they [they] wouldn't allow us to carry the Confederate battle flag."
"How very unfortunate for you" I responded.
He continued
"Yeah, we couldn't carry the Confederate battle flag in the parade, but they let the Buffalo Soldiers participate."
"Buffalo Soldiers?" I replied, wary of where this was going.
"Yes" he went on "Black reenactors could march but we couldn't carry our flag".
"Oh my", I interrupted, "look at the time, I've got a tour to get ready for!"  and with that I left him in the hands of a volunteer who was more at liberty to pursue that line of reasoning to a suitable conclusion.
So I'm left wondering, if the Confederate battle flag has nothing to do with racism then why did this nice man equate the exclusion of a Confederate symbol with the inclusion of black people?
Very curious.
----    ----    ----    ----
It was, by the way, while I was relating this to my wife over dinner, that the above mentioned rebel heritage pickup truck went barreling past our drive.
"Perfect timing" said the missus. 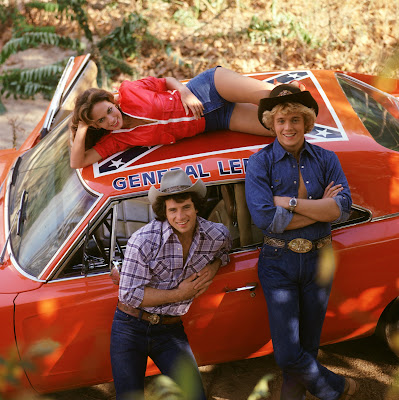 Great post Mannie and you handled it perfectly. It's ashame that you can't take the discussion a bit further, but I understand the position that you are in. Does the bookstore sell John Coski's book?

No the store doesn't as yet. Here's my favorite review of Coski's book:

Whether you love or hate the flag, after reading Coski you will love it or hate it in a different way.
--Theo Lippman Jr. (Savannah Morning News )

Mannie, I'm curious to know, after reading your posts of late, where does the CSA battle flag belong in today's society or in a serious review of our history? Can we who had ancestors who fought in the confederate service not be as equally proud of their service as those with family members who fought for the union? I'm proud of the flag but in it's proper context. I am a southerner and am equally offended when the battle flag is improperly used for the wrong reasons by ignorant and uninformed people. Yet I am very proud of my ancestors incredible sacrifice and service. Any thoughts?

Thanks for the thoughtful question. I have been thinking a lot about this lately.

I'm certain that if I had ancestors in the Confederate forces I'd feel very torn.

No other American symbol (that I'm aware of) has been so transformed over time as has the Confederate battle flag.

Thoughtful discourse (not often an American trait in recent years) on the subject seems more and more difficult to find as the various sides crank up the volume and the emotion.

Is there a place in American History for that square flag, inscribed with battle honors, and the name of a regiment emblazoned upon it? I believe, yes absolutely.

Has the design been hijacked by hate-mongers? Yes. again.

I don't know what it will take for the battle flag to be rehabilitated among those who see it only as a symbol of fear, hate, and repression, but I know that everyone loves a redemption story.

I look toward a time when justice, equal opportunity, and a new social consciousness will prepare the ground for a fair and unafraid assessment of many of our nations cherished, and reviled, symbols, beliefs, and ideas.

On that future ground,in that future discussion, perhaps people will be no longer afraid of what they might hear.

I'm going to get a CSA flag on my Royel Blue F-250 (havy duty four-by). You probably already know that all of the bourbon bottles and beer cans than end up in your yard are from me. I do have to say that busting on the Dukes is like busting on Mr. T hmm, what would have happened if they were all on the same show for one episode.

Thank you for your thoughtful response, Mannie. Just know that there are those of us that love that flag IN IT'S PROPER PLACE and respect those that suffered so much for it for what they believed, AT THE TIME, was right. We too hate that the flag has been hijacked by hate mongers and idiots! Knowledge is power ..

Mannie: Your comments on this subject are excellent and well-expressed, as usual. A minor correction on the original post: the rectangular design was used by the Army of Tennessee and the CS Navy; the square design was associated with the Army of Northern Virginia.

As to the Confederate flag being flown, and as one who feels it should be at Civil War sites, I will leave you with this from my CW travels.

I belong to an online group that has "musters" at CW sites since 1999. We visited the HQ of the SCV's last June in TN. I stupidly asked a dumb question, and never got a response to it. Had no problem with the CSA battle flag flying there, but I had the audacity of asking why the Stars and Stripes were not flying there as well??

The silence was deafening. Enuff said.