On my two days off I traveled to both Antietam and Gettysburg to aim my handy little digital camera down the muzzles of several guns to bring some light to the subject of smoothbores, rifles, and howitzers. 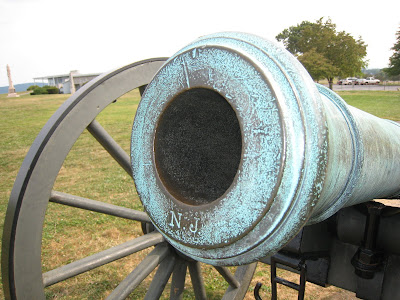 Here's the muzzle of that elegant little Model 1841 6-pounder gun in our four gun battery across from Dunker Church.  This weapon was state of the art in 1848.  By the time of the Civil War, however, it was quite obsolete, though still making its voice heard, especially among Confederate batteries. 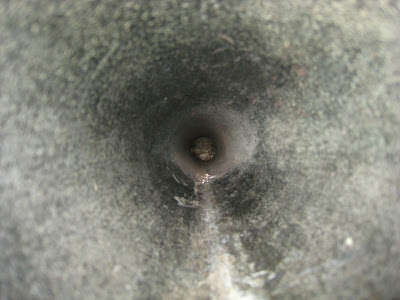 "Smoothbore" is pretty self-explanatory.  Of note is the wear within the bronze barrel.  This wear or "windage"  (that's right, it had nothing to do with wind)  forced the gunner to have to be very aware of the idiosyncrasies of the barrel and the influence of the windage upon the shot. 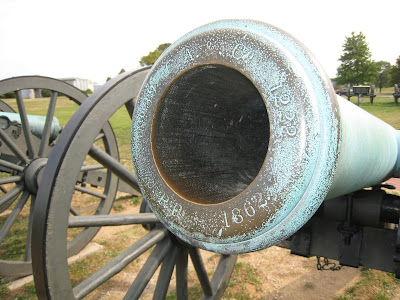 And here is the gaping maw of the big brother to the six-pounder; the twelve pound light gun howitzer.  A heavy, versatile, and feared piece of artillery. 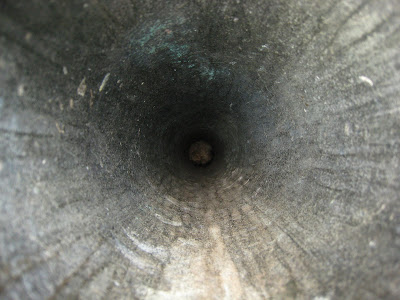 With even more pronounced patterns of wear than seen in the six-pounder, one has to wonder how much of this scoring was the result of firing canister?  Click here to see a video of four of these guns in action. 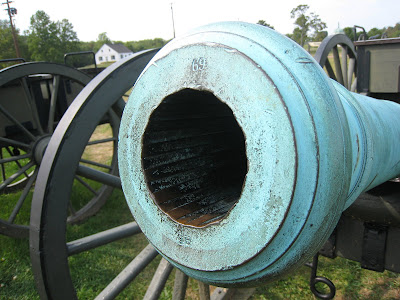 Here's a little bronze six-pounder that was rifled to accommodate James system rifled ammunition.  James projectiles had lead sabots to engage the rifling rather than the usual wrought iron.  Iron would have quickly worn the softer bronze to an off-caliber diameter. Although the lead sabot was very effective in engaging the rifling without barrel wear, lead tended to build up in the barrel, again affecting the inside diameter of the tube, and impacting the ability to ram the projectile home. 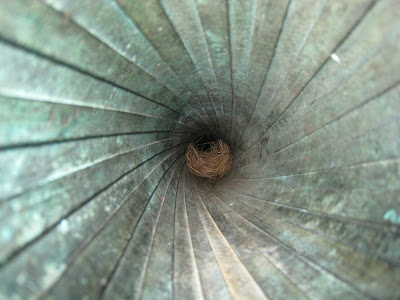 This view down the barrel of the James gun shows crisp rifling as well as an empty swallow nest. 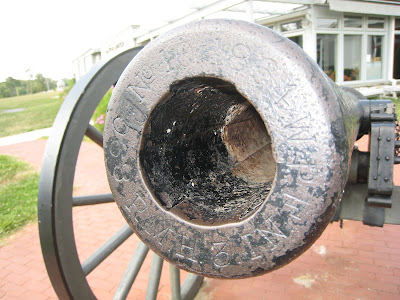 The muzzle of a three-inch Parrot gun.  This cast iron tube was very accurate, very cheap to produce, and very brittle.  These guns often burst, doing more mayhem to the gun crew than to the enemy. 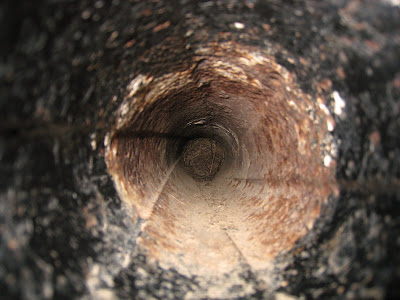 This shot down the tube of the Parrot show the three "lands and grooves" of this system, as well as the ubiquitous bird's nest. 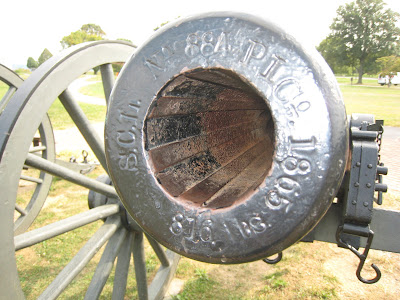 The apex of light artillery (arguably) is this 3-inch ordnance rifle.   Light, deadly accurate, and of much stronger wrought iron, this was a reliable and highly desirable gun on both sides.  Note the late "1865" casting date on the muzzle ring, this may account for... 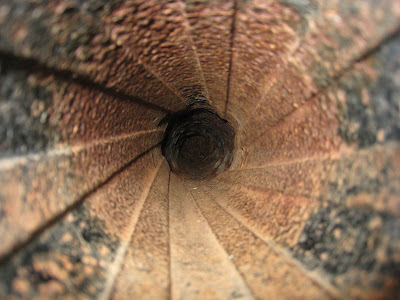 The still, very crisp, rifling.  Clearly this gun saw less action owing to its late entry in the conflict.
Of note in this view is the severe pitting that these iron tubes were subject to, of course this example is quite extreme as this tube has been out in the weather for nearly a century and a half.  Nonetheless, iron tubes, unlike the bronze, would develop pits over the course of use and these pits made it very important to dilligently run that dampened sponge-rammer down the barrel between each loading to extinguish any sparks hiding in those pits prior to the insertion of the next powder bag.
Here's part two:
Moving now, to Gettysburg (and a sunny day) we have five more examples. 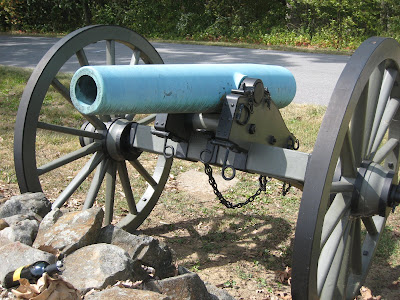 This is the Confederate manufactured version of the "Napoleon".  Unlike the union version which has a pronounced muzzle swell, the Confederate copy deleted that swell as an economy move, that's merely extra bronze that can go into the manufacture of another tube.  The unopened bottle of wine in the foreground?  One finds more than just birdnests in the muzzles of these guns. 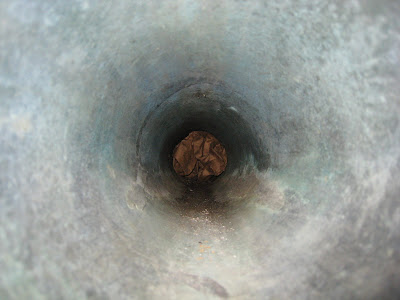 Again, as the name "smooth-bore" implies. The brown paper bag apparently was the wadding for the bottle of wine.
Here's the 12-pound howitzer. 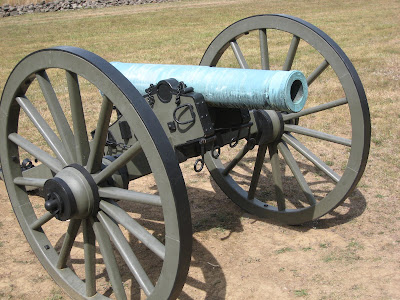 In 20th century warfare, howitzers are guns characterized by their high trajectory, the arc of flight, of the projectile. They almost "lob" shells into the target. During the time of the Civil War "howitzer" had a different meaning that had nothing to do with trajectory.

12-pound Howitzers were the same caliber as their big brothers the 12-poound Napoleon, that is they both fired the 12 pound ball. but the howitzer weighed about 1/3 less than the Napoleon, a savings of metal as well as the horseflesh to tow one of these things around. The difference was made up by the size of the powder charge. As the tube walls of the howitzer were thinner and had less mass the full-size Napoleon, the howitzer simply used a much reduced powder charge, lessening the pressures on the tube but also reducing the effective range of the gun. The trade off was between weight, available resources (bronze and battery horses) and range.

It wasn't a very good bargain. The reduced range of the howitzers meant that the battery had to move much closer to the action, well within range of not just counter-battery fire by enemy artillery, but by enemy infantry as well. 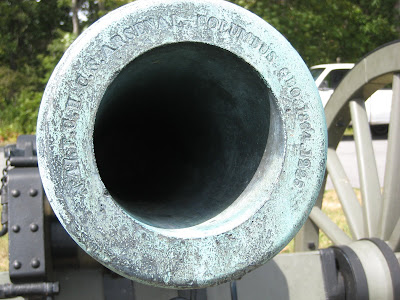 The muzzle ring 0f the 12-pound howitzer is chock full of information regarding its manufacture. 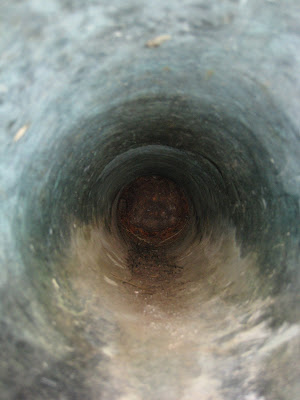 There seems to be an obstruction at the far end of the breech of this bronze gun, a rusty obstruction, a spherical, rusty obstruction!  Sometimes its not just bottles of wine you find down these tubes.  (click on image and decide for yourself)

Now comes the giant of the battlefield, the largest and heaviest of the field artillery, the long-range 20-pound Parrott rifle. 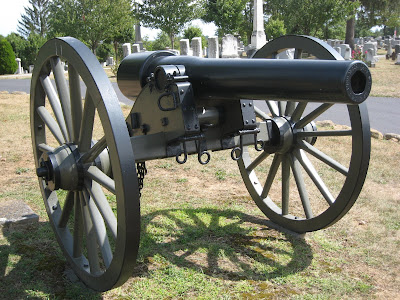 The yankees had four batteries of these at Antietam and they served continuously throughout the day. Their extended range, about two and one half miles, meant that they could reach out and "touch" nearly every part of the battlefield all the while remaining safely out of range of Confederate artillery. 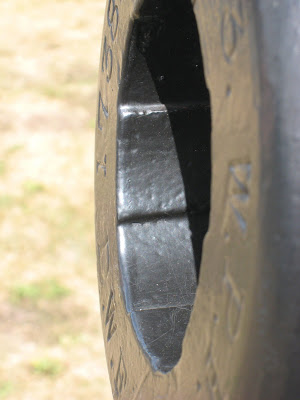 Crisp rifling at the very muzzle indicates cosmetic care by the park, as the view below shows... 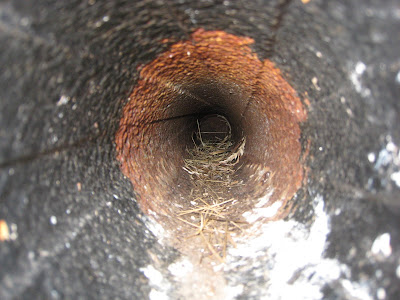 both the twist of the rifling as well as the pitting of the iron due to exposure to 150 years of weather.

Here's a reminder of why the Civil War is often referred (erroneously or not) as the "first modern war". 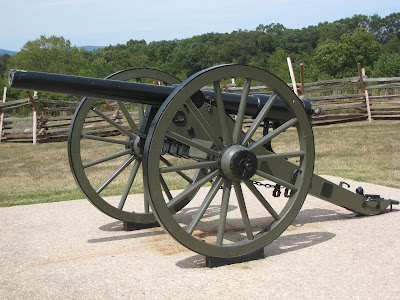 The 12-pounder, breech-loading, Whitworth was manufactured in England and imported by both sides though its most notable service was with the Confederates.  Breech loading made for safer operation by the crew, faster loading, and the nature of loading from the rear rather than the muzzle made for a tighter fitting projectile that popped out of the barrel like a champagne cork, rarin' to go.  These things were extremely accurate and had a range up to 5.5  miles! This extreme reach  served to work against their most effective employment.  With limited optics, erratic fuses, and the lack of visibility created by smokeless powder, these guns weren't often used at the extreme ranges they were capable of.  What sense would it make to fire farther than the battery commander could actually see (even with binoculars)? 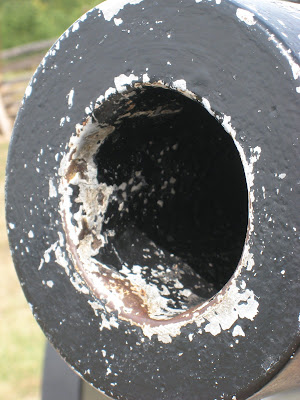 The lands of the Whitworth rifling are quite worn on this example.  And a look down the tube reveals the twist as well as... 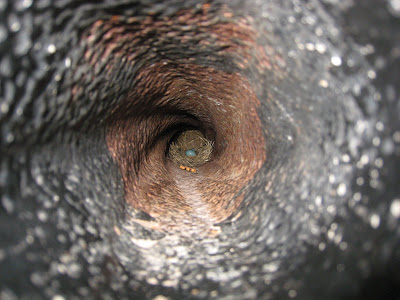 three swallow eggs!  It's not just bottles of wine and cannonballs  you find down these things.

And I saved the best for last.  The 24-pound howitzer. 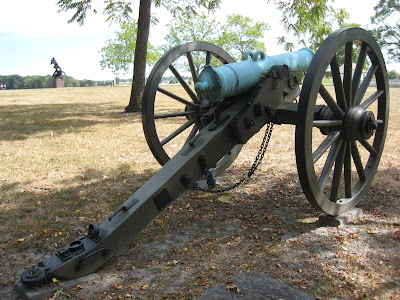 This is one of two at the park that features the old fashioned lifting "ears" above the trunnions. These handles fell into disuse as another savings in casting material. 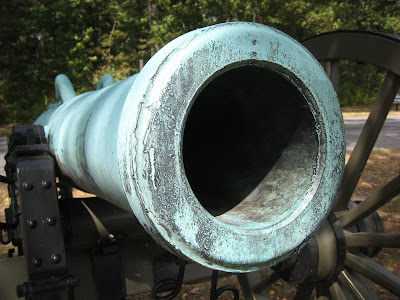 The gaping maw of the massive 24-pounder.  Typical of a howitzer, the tube walls are quite thin to sustain the firing of a 24 lb projectile.  Here's the trick: 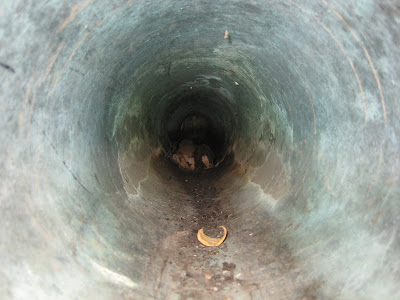 There was another characteristic feature of howitzers that set them apart from other bronze guns.  Click on this image to enlarge it and that feature will become evident.  At the very base of the breech you can see it reduces to a diameter about half that of the rest of the tube.  This smaller cavity accommodates that much-reduced powder charge, which will propel the heavy projectile down range without creating the high pressures that could burst the barrel.  The secret of the howitzer revealed.
Here's a link to one of my favorite online ACW artillery sites.
Thanks for coming with me on this little artillery safari across two National Battlefield parks in two days.  Lets do it again real soon!
Keeping my powder dry, just north of Boonsboro.
Ranger Mannie

Mannie,
If I may, two notes about the Parrott Rifle.

First, the Parrott in the photos is a later model, cast in 1864. It differed from those that were used at the battle in bore size (2.9 inch for the early types, 3 inch for the later ones). This particular example was a special lot cast at the beginning of the "new" Parrott production run. (More info on a blog post made earlier this year - http://markerhunter.wordpress.com/2008/02/20/antietams-collection-of-10-pdr-parrott-rifles/).

Second, looking down the bore of the Parrott, you managed to capture something I had read about, but not seen. The Parrott's right hand gain (or increasing) twist rifling!

Good photos. With my low tech camera, my bore photos are often mistaken for NASA shots of black holes.

Excellent post, Mannie. Those photos prove the truth of the statement about a picture being worth a thousand words.

Great post Mannie. I just bookmarked it for my Civil War course.