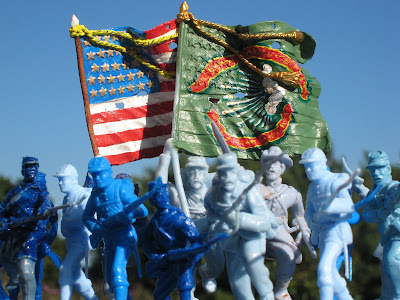 This Saturday will find me up in Gettysburg at the 2008 Fall in! military miniatures in war gaming convention (link here).
Though focused on miniatures and gaming,  I'm inclined to think that among the dealers I'm bound to find some deals on unpainted plastic 54mm ACW guys by some of my favorite makers. Also I think it'll be fun to meet some of the other enthusiasts up there and see the levels of play involved as well as the historic scenarios of the simulations.
I'm not into "miniatures"; those beautifully hand-painted, pewter soldier figures that are both expensive and non-conducive to playing in the dirt. Also I've never been into war gaming which involves two of my least favorite aspects of human life: competition and following rules.  I prefer simply setting 'em up and knocking 'em down. Still I think it will be both fun and interesting to watch others maneuvering their period-correct, little armies across various historic tableaux.  I'm also expecting to encounter some pretty jolly people as well, and that's the main thing.
If you see me be sure to say hello.
With my limited wardrobe, I'll look like this: 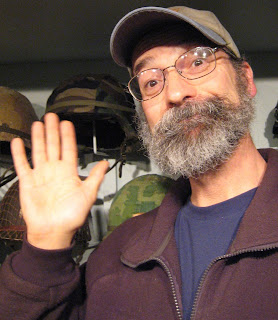 Though as I think of it...there will be a World War One
theme to the convention. hmmm...

Oh please go with the second wardrobe choice! Stop by the Visitor Center. Its Doughnut Saturday and as a park ranger you are entitled to a doughnut!