The Six Cemeteries of Sharpsburg

It is remarkable that a village as tiny as Sharpsburg would be the site of six cemeteries. Some like the National Cemetery are very large, others are particularly small, as in the case of the African-American burying ground known as the Tolson Cemetery.
Let's begin right behind the visitors center just uphill from the Mumma farmstead.
Lying in the heart of the battlefield, on shaded high ground is the always tranquil and inviting Mumma cemetery. 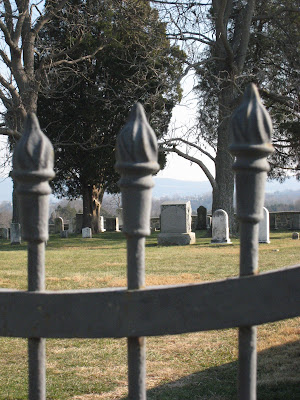 This is the burial ground for the Mumma family and although its surrounded by a gated stone wall, it is always open to visitors seeking shade, cooling breezes, and beautiful vistas.

Continuing to higher ground is the town cemetery, Mountain View. 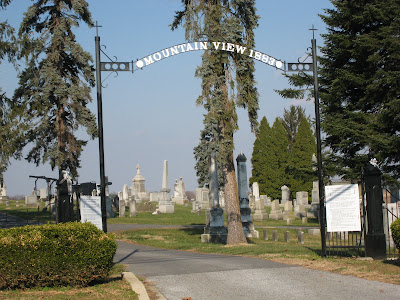 This is the cemetery that has been the final resting place for generations of Sharpsburg residents since 1883.  From its height you can look north for views of the Piper Farm and the Visitor Center, to the east, as the name implies are vistas of South Mountain and Elk Ridge.

Of course no visit to Antietam National Battlefield would be complete without a stop at the National Cemetery with its ornate front gates and  picturesque Victorian Lodge. 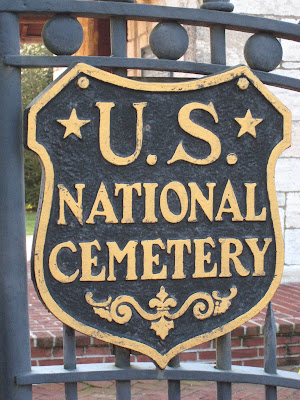 The massive statue of the Civil War soldier, known as Old Simon, stands sentinel over the graves of 4,776 Union soldiers, a continuing reminder of the price of freedom.

Proceeding down the hill toward Sharpsburg, one encounters the Lutheran cemetery.
This cemetery was established in 1768 with the earliest internment dating from 1774. 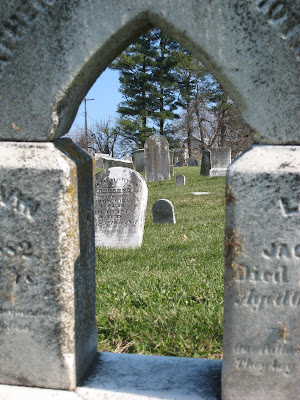 The church that stood here during the savage fighting of September 17th 1862 is long gone, but the stones still bear silent witness to that terrible fight.

Much of the African-American heritage of Sharpsburg can be found represented in the Tolson cemetery directly behind the Methodist Episcopal Church in Sharpsburg.  Dating back to 1867, the church was founded by and served former enslaved blacks, including... 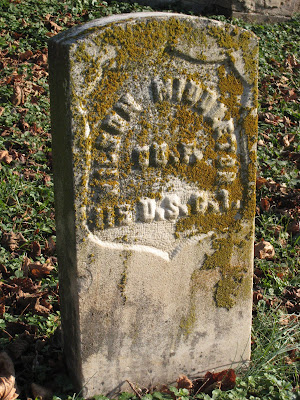 this member of the U.S. Colored Infantry, a veteran of the Civil War, and a messenger of emancipation.

Finally, tucked off mainstreet, are the stones of the Reformed Church burial ground. 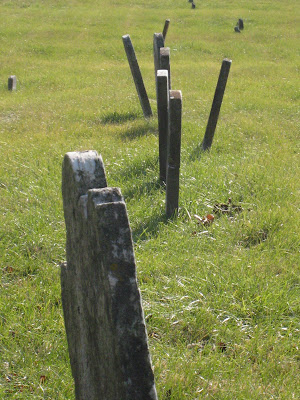 The first burial was in 1775, the last in 1883 when Mountainview Cemetery opened and became the primary resting place for the good people of Sharpsburg.

Each of these cemeteries has its own special character, and each is equally worthy of a visit. Do seek them out on your next trip to the Valley. Perhaps we'll encounter each other amid the memories.

Posted by Mannie Gentile at 9:14 PM

Mannie, you need to check out the "Gettysburg Daily" website put out by staff from the local paper there. Fascinating photography and behind the scenes posts you would appreciate.

Thanks Mr (or Ms) Anonymous,

It is everything you say it is. I just bookmarked it.

Six cemeteries, all but one amply marked. The Mumma cemetery of course with NPS markers; the National Cemetery with several monuments and markers, perhaps Old Simon the best known; The Lutheran, First Methodist, and Reformed Cemetery with the "little brown ones" of the Washington County Historical Advisory Committee. Only the Mountain View Cemetery is unmarked as near as I can tell. However War Department Tablets outside the grounds explain the role that rise played in the battle.

One more (small) cemetery--my wife's ancestors, the Hebbs, had a farm on the outskirts of Sharpsburg. Edward Thomas Hebb was a Revolutionary War veteran, and he and his wife are buried on the property. I think only a chimney remains of the house, but I recall reading somewhere that there are headstones on the property, and also that Stonewall Jackson had breakfast at the house on the day of the battle.

Thanks for that fantastic tidbit.

I'll see if I can track it down.

Mannie: Did you ever find the Hebb cemetery? I think my great great grandmother, Catharine Hebb Chapline, is buried there based on the following:

"The Parish Records Kept by the Rev. John Alex Adams, St. Paul's Episcopal, Sharpsburg" said in a June 27, 1864 entry: "Burried (sic) at the Grave yard of the Hebb family on the Farm of Mr. Urias Knode Mrs. Catherine F. Chaplin, who departed this life on the morning of the 26 Ins. aged 68 years 3 M. 20 days."