Illumination day dawned cold and overcast, and was to get even colder as the hours grew later.  Cold or not, the visitor center was a beehive of activity by the time I arrived.
No sooner had I settled in, did I get paged that I'd visitors at the front desk.  And I was happy to meet long time blog correspondent Richard and his delightful niece Sarah and friend Samantha.  Sarah became a Junior Ranger this year and is justly proud of her achievement, she's quite a student of the Civil War and both she and Samantha were very charming and bright girls.
After some pleasant conversation we three gathered at the blogger's gun for the photo below. 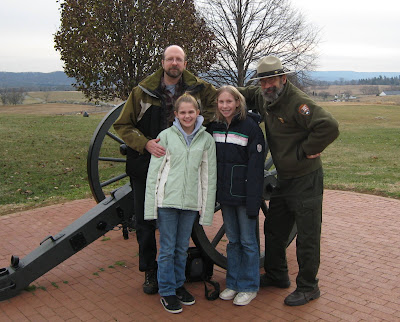 Richard, Sarah,  Samantha and me.
For a really fine personal view of the Illumination, check out Richard's video here,
(as well as mine, here).
That day had me so busy I was able to shoot only a few photos, including these: 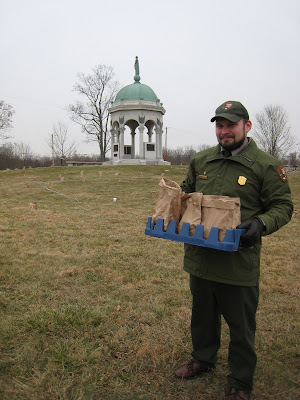 Okay, that's a lie.  The actual work is done by over 1,300 volunteers, many of whom have been doing this for twenty years now and they really have it down to a science. 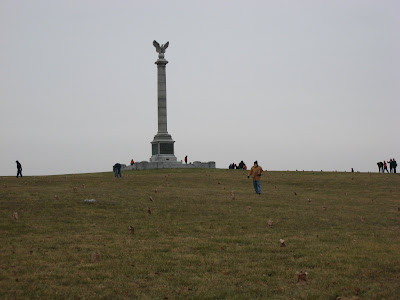 By about four o'clock the volunteers started fanning out across the battlefield lighting the candles in the very cold afternoon. 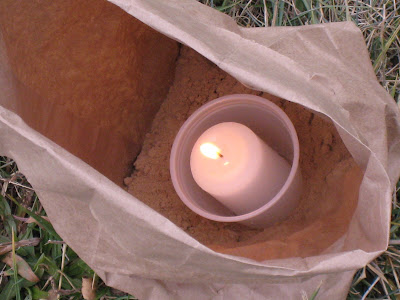 As the sky grew dark the amazing happened again, those simple brown paper bags, weighted with sand and containing a single candle... 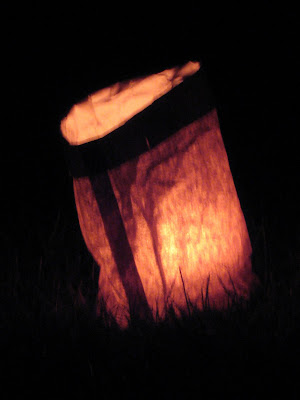 helped us remember each of those 23,110 American casualties of the Battle of Antietam.  September 17th, 1862 remains America's bloodiest day and the day that transformed the American Civil War into a war of liberation.
Its good to remember.
Ranger Mannie
Posted by Mannie Gentile at 5:00 PM

I may have missed it somewhere but why is that done in December? Looks wonderful and I hope to attend that one day!

It isn't until December that the last of the crops are harvested from the fields.

You were one of the high points of our day! Thank you for being so great with the girls. Just a slight correction, Sarah is my niece. Hoping to get the whole family to Antietam for a guided tour with you this Summer.
After we got in line (about 15th car) we took a walk up in the hills to the right of Route 34. I wanted to see if the Pry house was visible from one of the ridges. After cresting the second ridge we came to a spot overlooking a deep meadow filled with about 50 deer of all shapes and sizes, including a HUGE buck that looked like at least a 10 pointer.
I will be posting images from our Antietam outing to my Flickr account later this week.
Thanks again and keep up the good work and blogging!

Correction made, and I thank you.

Glad you were able to use your time in line so adventurously!

It was a great event but sure got cold.

Best wishes to you and the girls.

Mannie, as related in by blog on Sunday, we enjoyed the display. My "aide-de-camp" was quite impressed with the candles. I apologize for not meeting in person, but with the activity at the Visitor Center throughout the day, I felt best not to impose. But again, excellent work by all those involved.

Viewing the illumination was an amazing and very moving experience. Photos cannot do it justice. A must-see experience for everyone!

I heard that National Geographic and/or the History Channel filmed this year's event--any idea when they might air something?

I thought that was Hoptak selling peanuts.

Give Hopy some credit, it appears he set up four bags.
Brian