When I begin my programs at the battlefield I hold up a park brochure opened to the map and say:  "This, isn't the battlefield".  Then I gesture toward the vast bank of windows of the observation room toward the landscape beyond and say "That, is the battlefield".
Now, I know, that's all pretty obvious.  Unfortunately the way we learn history is through maps, flat,  two dimensionally.  Peering down at a map everything seems so clear and understandable, and we find ourselves making judgements about how the various generals comported themselves during the battle, in our very godlike way, towering over it all, bathed in 146 years of combined analysis of the battle, with our handy park brochure.
None of which was available to the generals that actually fought the battle.
The point I try to make to the visitors is that the battlefield, the actual three dimensional one, is a vastly confusing place, and what we view as gently rolling and very beautiful countryside, was seen more as a death-trap for the men who fought here.
Recently I did a little study of some of the terrain features that figured into the first four hours of the battle, the "Cornfield phase" which would range from East woods to Nicodemus Heights. from Poffenberger ridge to beyond the Mumma farm.  Now, believe me, I broke no new interpretive ground here.  This story of terrain is one that has been told by generations of Rangers here at the battlefield, and they all do a better job of it than I ever could. However I'm the one with the camera!
Here are some revealing photos.
Here I am (nice vest eh?) in the Cornfield, facing east.  Note the very dramatic ridge just behind me.  This ridge has a declination of about five feet and is about two hundred feet long running north-south. 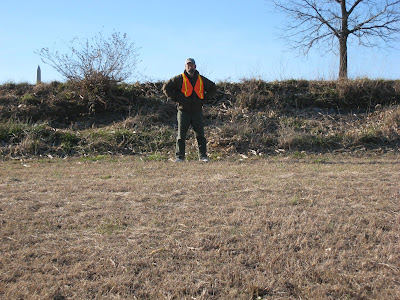 And here's what you see from the other direction: 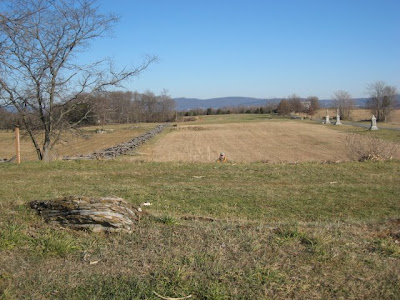 You are viewing this west of my position, you are looking east with the remains of the East Woods beyond the Cornfield in the foreground.  Imagine if several regiments of your enemy were hidden from your view if you were advancing in this direction.  Or imagine if your regiment, in line of battle, was advancing in a line parallel to the fence, suddenly your left flank or center would disappear from view.  My, how confusing.  Even more so when men are trying in earnest to kill you.
Here I am crouched behind a rock outcropping that runs perpendicular to Starke Avenue due west of the Cornfield.  This ridge is several hundred feet long and has a declination of between two and four feet. 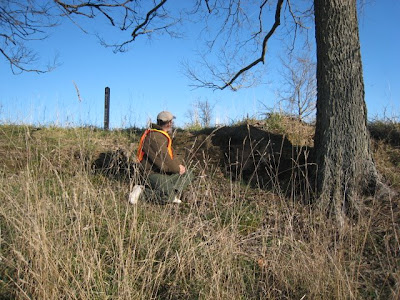 It also has a commanding view of... 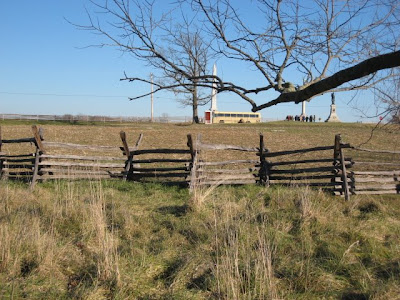 the Hagerstown Pike and any unfortunates who would happen to be advancing down it.
This rock ledge is mentioned in several reports and other accounts of the battle.
This rock ledge served as an impromptu fortress three times during the course of the Cornfield fight. Initially, Union troops under Doubleday enfiladed elements Hood’s Division. In subsequent action, Confederates of the 46th North Carolina, commanded by E.D. Hall would enfilade Union troops advancing along the Hagerstown Pike. Due to its commanding position of this rock ledge, relative to the Hagerstown pike, it becomes immediately evident that any troops positioned behind this outcropping possess a field of fire encompassing the road and any troops unfortunate enough to be on it. Ezra Carman, Antietam historian and colonel of the 13th New Jersey led some of those unfortunates and recalled the scene thus; “The men were being shot by a foe they could not see, so perfectly did the ledge protect them”.


The "Disaster in the West Woods", the destruction of Sedgewick's Division in the West Woods by Confederates under Early was due in great part to the fortunate (for Early's men) placement of a ravine system behind the Dunker Church that runs through the West Woods.  Good luck and these ravines would channel Early's men to advantageous positions on the flank and in the rear of Sedgewick's doomed division.  What passes in reports and historic accounts as superb or lackluster generalship is often more the work of chance and terrain. 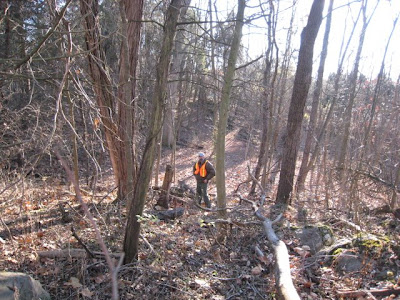 Deep down in one of the ravines travelled by Early's men.  Seldom did visitors venture into this area.  Now, however the area is accessible on the Park's new West Woods trail.
Finally, one last terrain feature that had an important role in the battle.
This is the view the Confederates had of the Mumma swale on Dunker Church plateau.  This is just behind the Visitor Center.
It looks like an easy advance to the Mumma Farm and points east. 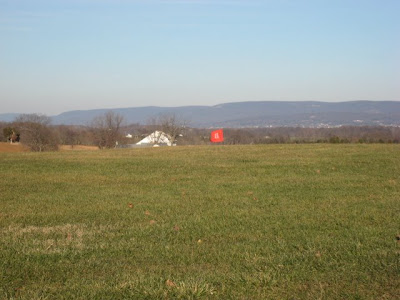 Your only concern is that little guidon snapping in the breeze.
Not until its too late will you (assuming you are a Confederate) realize that the guidon represents Union General George Sears Green... 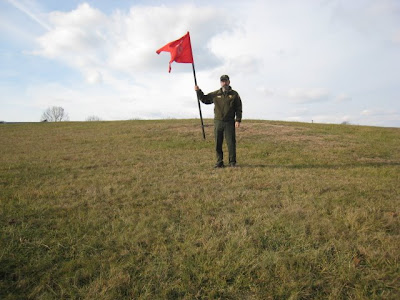 and his 1,700-man division concealed from view just beyond the lip of the swale, which will rise up and destroy your regiment.
Make no mistake, I love maps, they are fabulous teaching tools.  But to really understand the battle, there is no substitute for  walking the actual ground and discovering an appreciation ofthe difficulties faced by those who fought over this very dynamic, and confusing landscape nearly a century and a half ago.
Come see for yourself,
Just north of Sharpsburg.
Ranger Mannie

Link to the park's website here
Posted by Mannie Gentile at 9:20 PM

Great post and terrain study, Mannie. I've always told people that you HAVE to go to a battlefield and walk the ground before you can even begin to understand the event!

Earlier in the year I had some time to really get up close with the battlefield. I don't care how much you read about it all, there's always something missing until you walk the ground.

You are right the ledges were critical to the unfolding battle. I would even advance the argument that the entire morning phase of the battle is a struggle for the possession of a series of rock ledges. Well, maybe excluding the Sunken Road sector, although I think a case could be made.

The movement of 27th NC and 3rd Arkansas of Manning's Brigade is another where the ledges featured prominently. And their movement took place practically at the doorstep of the VC!

Amen, Brother Mannie. We'll be trampin with you come Spring. Meanwhile, a Happy Christmas to you.

I am a newcomer to you blog, and as someone who covets your job (or, rather, one like it), I have really enjoyed reading through your archive.

This was a great post! I have yet to visit Antietam, but when I do, I will be sure to explore the areas you mention here.

This is the kind of posting that I really get into. As others have said, the only way to get a real appreciation of the lay of the land is to walk it. Your added dimension of photographs and the use of the guidon in addition to my personal memory of the area help to get a better perspective on the Cornfield phase of the battle.
I remember walking along the ridge by Starke Avenue on the last part of the Cornfield trail but did not really appreciate the potential of that terrain feature until now. So of course I cannot wait to get back and examine it in a more tactical manner.
No need to tell you to give us more posts like this!
Happy Holidays and thanks for the early Christmas present.

Excellent article Mannie. I was really surprised by the terrain in the cornfield. Imagine it in September when the corn was fully mature. Lots of friendly casualties I'm sure.

An excellent way to illustrate the impact that the terrain had on the battle--thank you so much for posting the photos! My friend and I recently explored the rock ledge that you speak of since we believe one of her ancestors was there firing at my ancestor in the Cornfield. As we walked over from the Cornfield it took us awhile to actually locate the ledge, so I can imagine the element of surprise it gave those soldiers who utilized it during the battle.

Thank you all for the kind comments.

Antietam is an continually fascinating place.

I wish you a happy new year.

While it has always been easy to understand the effects of the therrain on the battle at such places as the Sunken Lane and Burnside's Bridge, it is critical to understanding the battle to fully appreciate the topography.

Add to the terrain the effects of smoke as well as vegetation and you could almost wonder why casualties were not even higher.

Topo maps are the only way to go for map study...Trail Head Graphics have a good set.