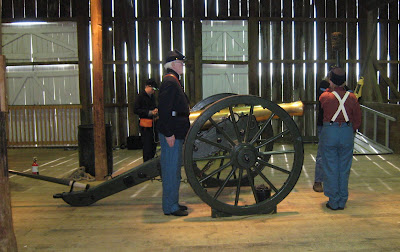 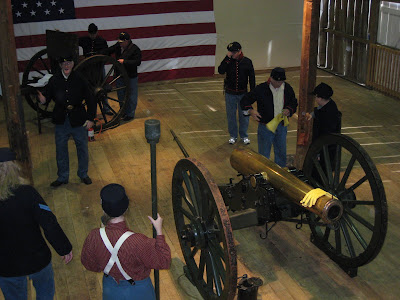 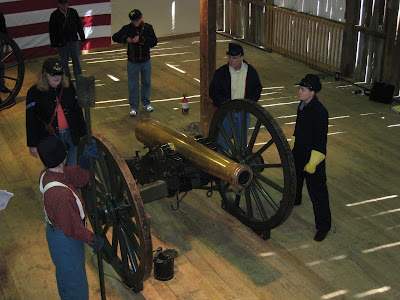 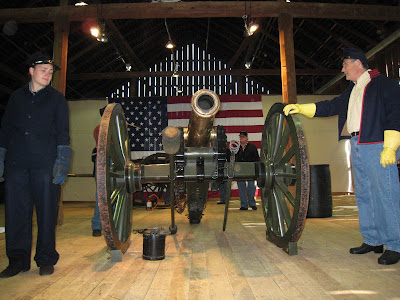 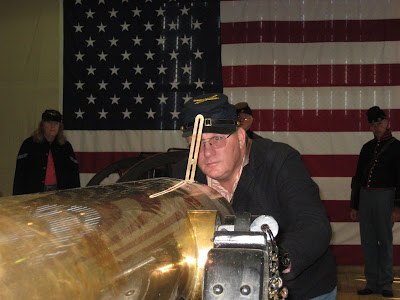 Come on out this spring and summer to see our crew in action.
Blam!
Mannie
Posted by Mannie Gentile at 9:46 AM

I hope that moves from tentative to actual. Big Booms" sure helps keep the visit in the minds of the little ones (and I sorta like them too!)

I know this would ruffle some feathers, but could'nt they find enough male volunteers to fill out a gun crew? Either way given the role of artillery at Antietam it will make for a neat presentation. ~Gary

The last photo shows a gunner aiming carefully. It has always amazed me how accurate the gunners could actually be. It's got to be hard to aim a cannon in the midst of battle, amid clouds of smoke, while hoping that a sniper doesn't have you in their sights, but what about the sailor? These guys were good.

I've also thought about how good the gunners from both sides became in their line of work. It seems that by 1862-1863 they could place shots anywhere they wanted to that was within range. To think that except for the Whitworth and maybe a few other guns the cannons weren't breachloaders and the manual siting was what they had to work with their ability to wreak total destruction became very impressive. I think it was D.H. Hill who was reported as saying, "Give me Rebel Infantry and Yankee Artillery and I'll conquer the world".
Thanks for the post,
Chris

Thanks Mannie, for showing how some folks have chosen to preserve our national history. Keep this stuff coming!

Re-enact-tards like you make me want to pull out my long, silky, girl hair. Have you ever thought about thanking the members of the detachment (not "gun crew") for volunteering instead of focusing on their gender? I think YOUR anatomy is making you think and say silly things.
Sincerely,
A Big Supporter of Dames, Broads, and Skirts “Manning” the Guns

Looks like a discussion ensues.
In the words of Saint Frank of Sinatra "let's keep the party polite".

I'm very excited to see that there will be an artillery presence at Antietam. Hearing just one gun go off can help folks realize just how loud the "Artillery Hell" got on Sept. 17, 1862.

As a female re-enactor in a Maryland artillery unit, I have to say that I have heard some criticism from people about the accuracy of women in the ranks, but this is mostly from the historically misinformed. A great book on this subject is "They Fought Like Demons" which has documented cases of women fighting in the ranks, getting wounded, captured, and even dying during the Civil War.

There was at least one female Confederate soldier killed during Pickett's Charge and another one who was wounded and had her leg amputated.