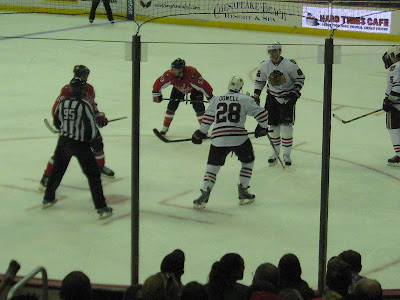 Recently I went to a hockey game with Rangers Brian, Alann, and John (Hoptak).
Though It was between the Capitals and the Blackhawks, I kept calling it "the Rangers game" cuz, well, we're all Rangers. I thought it was pretty funny but the guy sitting next to me thought I was lost or something. Anyway here are highlights with color commentary:
There was lots of really bad, really expensive food at the arena. John got a funnel cake: 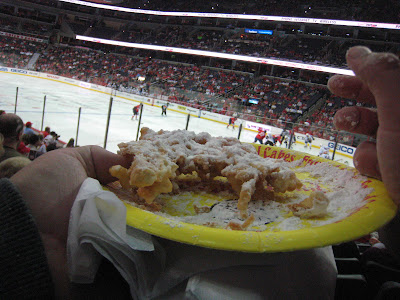 which I think he regretted.
Speaking of food, the Capitals are lead by a young Russian player named Ovenchicken (or something like that). Comrade Ovenchicken is very good at what he does which involves skating. Oh, did I mention all the players are on ice skates? Did I also mention this was my first hockey game?
Everytime Ovenchicken scored, which was every few minutes, Alann would say: "Hey, take my picture" and then he'd do this: 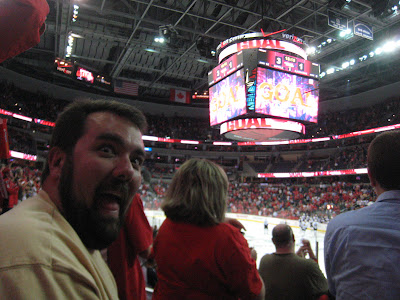 It helped to add to the general excitement of the crowd, Alann's very good at modeling appropriate behavior for others. 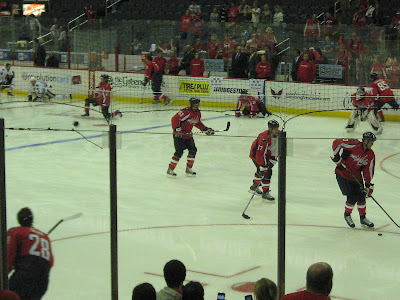 The capitals (capitols?) won 103 to 2 sending the evil Chicago Blackhawks home in tears of humiliation.
And I had a very fun night out with some very fine friends.
Mannie
p.s. I can now also check "hockey game" off my list of things to experience.
Posted by Mannie Gentile at 10:45 PM

no mention of the hot, young, girls in the crowd?
mr. polanski

Is the hockey season starting or ending? I'm so confused. Oh, wait a minute, that's my normal state. . . .

Congratulations on seeing you're first hockey game. I always thought I would have been good at this sport. Unfortunately growing up in Florida there was a severe shortage of ice skates, hockey equipment, ice rinks, and how exactly the game was played. We heard stories from foriegners from Up North about this sport but never had any direct knowledge of it ourselves. I always thought it was an urban myth untill I crossed the Mason-Dixon Line.

I have yet to attend a hockey game, but after reading your description, I really must put it on my "bucket" list. Admittedly, I will pass on the funnel cake...perhaps I'll try a deep fried twinkie instead.

The funnel cake might have been bad, but Ranger Alann is mighty tasty looking!