This week provided a vivid reminder of why the Park was created in the first place. Established by the War Department in 1890,  Antietam, as one of the original five National Military Parks, was mandated to provide instructional venues for the education of military officers and cadets. This role and tradition continue to this day as evidenced by the three military 'staff rides" we hosted over the course of 48 hours. 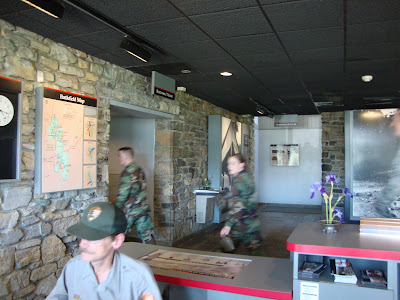 The first group of 240 were medical personnel from the Army, Navy and Air Force, seen here, zooming toward the theater.  George Wunderlich of the National Museum of Civil War Medicine gave them a tour with a special emphasis on the role of the medical service at Antietam.

The second group that day was comprised of about seventy 48th Division reservists who toured the field for several hours with Range Mike. 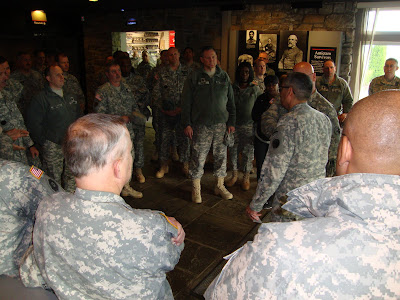 For which they were very appreciative. 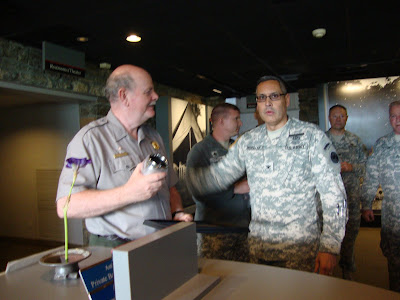 Mike was a Lt Colonel in the Army himself and has a great affinity for these groups.  Here, he receives a gift of appreciation from the leader of the group.
The third staff ride arrived yesterday and was made up of seventeen members of the U.S. Marine Corps. 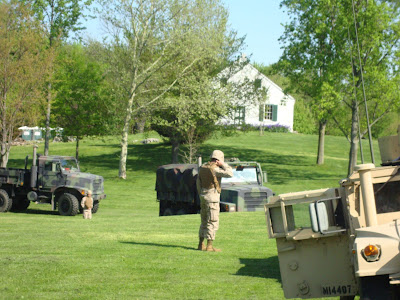 It was quite a sight to see their vehicles convoying onto the grounds and parking just below Dunker Church.  Although "lean, mean, fightin' gyrines" they were very pleasant and I enjoyed a very relaxed and informative conversation with the warrant officer in charge of the group. 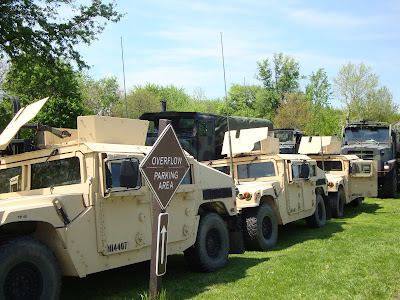 The vehicles themselves provided quite an attraction for visitor during their six hour stay.
these Marines really enjoyed a two-hour talk given by Antietam Park Historian, and their fellow-Marine, Ted Alexander.
Staff Rides are a great tradition which continues here at Antietam National Park, and provides us with the opportunity to give back, just a little, to those who give so much for all of us.
Ranger Mannie
Posted by Mannie Gentile at 10:23 PM