War is a very simple thing - made up of hundreds of complicated things.
Carl von Clausewitz 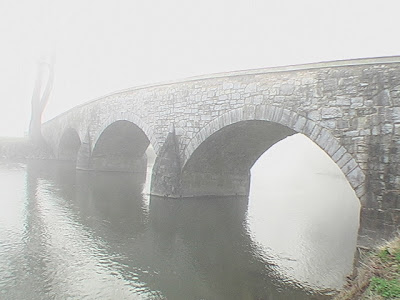 Most artists, far too many historians, and all nine-year old boys insist Ambrose Burnside was fixated on the bridge.

Oh, would that wars were fought by the armchair analysts.

Burnside, knowing the bridge was a bottleneck sent his main attack, in two divisions, upstream and downstream.  The downstream attempt by Rodman was successful.  Finding a ford a mile and a quarter from the bridge, Rodman got his division across and came boiling up on the Confederate flank, compromising the rebel position and allowing the bridge to fall into Union hands.

The war is so simple when explained by artists, too many historians, and all nine-year-old boys.

At least the nine-year-olds may outgrow it.

Very nice post Mannie, and a great shot of the bridge.

A very nice reminder of an overlooked tactical reality.

Well, there you go!

Ruining our reality with a little thing like facts!

You'd think you were a park ranger or something.

I recall standing by the Great Civil War Sandwich Column (AKA the Monument to William McKinley) with a small group of Army officers on a staff ride when a group came off of a tour bus. As we were discussing the tactical situation and the Union flanking movement, I overheard their "tour guide" explain how the 50th NYVI and 50th PAVI "won the day despite Burnsdies blunder."

I almost threw up.

Wonder how much they paid for that "history".