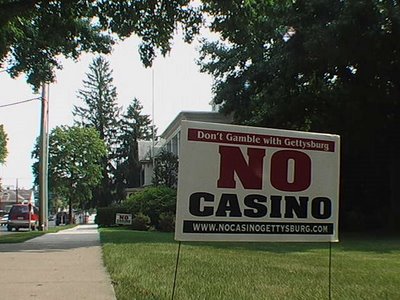 All over Gettysburg you now see yard signs for or against the building of a casino in the area. Local voters seem pretty evenly split on the subject. Each side has hired its own study to prove beyond a shadow of a doubt that the casino will be good or bad for the community.

Some nice preservationists came by the Antietam visitors center the other day and the chat turned to developments "up north" as Gettysburg is often referred to. They seemed a little alarmed and even put off by the fact that I really have no opinion on the matter of the casino.

My comment was something like "I guess the folks up there will decide what they want, and who should know better than them?" Clearly that was the wrong response, and I was then quoted chapter and verse regarding the deliterious impact of a casino upon the integrity of a hallowed battlefield.

As if Gettysburg were pristine and unspoiled ground! I think the tee shirt shops "art" galleries, and motels took care of that a long, long time ago. Perhaps the military man who had the greatest impact on the post war look of the immediate environs of the battlefield was that famous Colonel from Kentucky, you know him...Sanders.

I suppose many folks in Gettysburg want more employment opportunities, who am I to begrudge them? Sometimes it seems that ACW enthusiasts forget that G'burg is still an actual town filled with people who are trying to scrape by, many of whom haven't the least interest in the battle of Gettysburg and more interested in the battle of keeping the wolf from the door.

It will be interesting to see what happens. I'm just glad I live down here.
Posted by Mannie Gentile at 7:10 PM