Perfect Ending to a Perfect Season 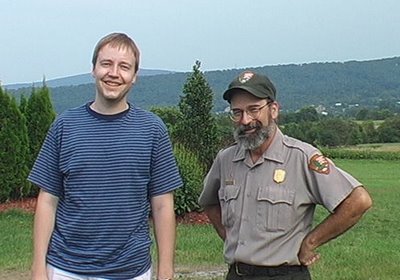 With the passing of Labor Day, Antietam National Battlefield goes to winter hours and a somewhat reduced programming schedule. It was my privilege to give the final battlefield tour of the summer season yesterday. It was a fine day to explore the battlefield. The weather was perfect with temps in the high 70s, a very slight breeze and sunny.

74 visitors joined me for the 2 hour ranger-led tour of Antietam. Everything was clicking, people were enthusiastic and participatory, even the teenagers were engaged. Everyone was happy to be there, no one more so than me.

As the crowd thinned out following the tour (when I hang around to answer questions) a tall, young man held back until he was the last visitor on the heights above Burnside Bridge.

Now most battlefield visitor questions have a ring of familiarity to them: "Why did they fight that way?", "Why didn't they blow the bridges?", or "Where did they bury everyone?". This last visitor, however, had a question I'd not been asked before.

"Were you my sixth-grade teacher back at Crestwood Middle School?"

This would have been around 18 years ago when I was an enthusiastic student teacher at a middle school in West Michigan.

"Yes, I guess that must have been me".

He introduced (or reintroduced) himself to me and we had a very jolly time catching up on the news of my former homestate and old teaching colleagues, as well as his career and the twists and turns that our lives have taken since last we met. We agreed that we'd both done very well for ourselves, he - Alan- as a corporate computer guy and I as a park ranger. As we were talking I searched my memory banks trying to conjure up an image of Alan as one of my sixth graders way back then. This towering young man speaking with great poise and authority bore no resemblance to any of those goofy knuckleheads that I'd enjoyed teaching so long ago. Hard as I tried I just couldn't recall him as an eleven-year-old. But despite all of the growth, passing years, course corrections, and evolving circumstances, one thing hadn't changed:

he spent those two battlefield hours as my student and I, as his teacher.

There is a symmetry to be found here, just north of Sharpsburg.
Posted by Mannie Gentile at 9:24 AM

that is soooooooo cool!! what a nice story! i wanna go on one of your tours.