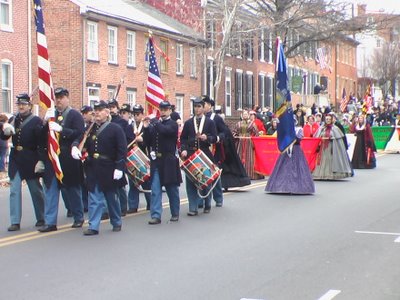 I've always been ambivalent about the hobby of reenacting. Most reenactors tell me that they do it to educate the public about the Civil War. I'm often skeptical of the actual educational value of their efforts.

Now, I grant you that many reenacting groups do an outstanding job of Civil War education. Antietam National Battlefield utilizes living history groups as an educational asset throughout the spring and summer season. They are outstanding groups that work hard to convey the feel and meaning of soldier and civilian life during the war. From Sharpshooters, 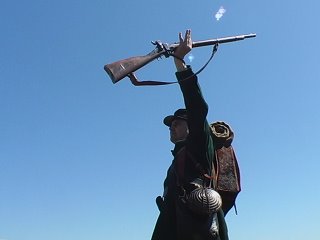 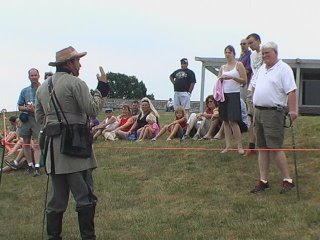 to the civilians of the U.S. Sanitary Commission, 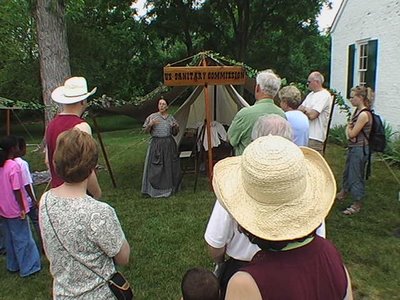 to the spectacular of Artillery weekend, 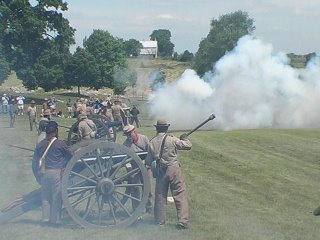 what all of these reenactors have in common seems to be an overarching passion to explain the people and technology of the era to a wide audience without trivializing the impact and carnage of combat. They do a great job of "making history come alive"...also they don't spend time pretending to get shot.

Which brings me to that other aspect of reenacting: bogus combat.

Reenacted battles don't resonate with me as an educator. As a didactic resource I find sham battles about as authentic as a Roadrunner cartoon. Seems that no matter how many times Wiley E. Coyote gets blown up with Acme dynamite , or has a 5,000 lb Acme anvil dropped on his head, he always shakes it off and gets up again. So too with reenactors "killed" or "wounded" on the field; when the smoke clears they get up, brush themselves off, and head back to camp for slab bacon ("Fortunately I keep my feathers numbered for just such an eventuality")none the worse for the experience.

That's not an accurate representation of the carnage of combat nor is it particularly educational...though sure, it looks like fun.

Then there are the "Reenactors Only" events. One is occuring during the 145th anniversary of Antietam next year. At the park I get lots of calls from people who want to know if we're having a big reenactment. I inform them that we don't do battle reenactments at the park. I mention that there is a private reenactment going on at that time, however, their press release states that its for "reenactors only". One caller recently responded: "Well what's the sense of that?". Good question. I had nothing to tell him.

Perhaps that will be important "alone time" for the reenactors to educate each other about thread count, correct buttons, the perils of farbiness, and other such stuff. Have fun guys.

There is another echelon of reenactors who tell me that they do it simply to honor their Civil War ancestors. 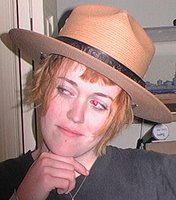 I find that both touching and legitimate. I hope that one day my great-great-grandchildren will dress up as park rangers
and give tours of historic places in tribute to me.

Others tell me that they reenact because it's a fun way to campout with the guys and play war, and I really appreciate the candor of that response. Everyone's entitled to a hobby.

All that being said, this past weekend another Antietam ranger invited me up to his home in Gettysburg for a private battlefield tour and the opportunity to experience Remembrance Day", the commemoration of Lincoln's Gettysburg Address.

At Remembrance Day I encountered the the spectrum of reenacting, from the zany (General Santa Klaus C.S.A.) 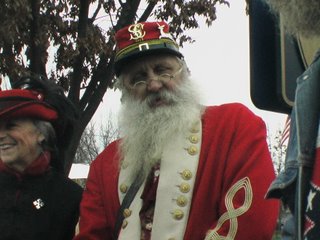 to a very heavy, heavy dragoon: 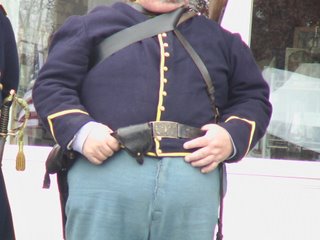 to absolutely the greatest use of reenactors I've ever seen; THE PARADE! 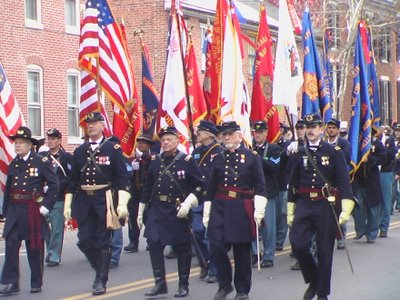 Seeing thousands of reenactors marching in ranks, accompanied by drums and bands was one of the most evocative Civil War education experiences I've ever had. 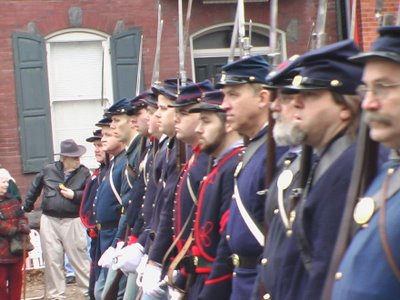 Thinking of the 1865 Grand Review, I commented to my host - "So that's what it must have looked like".

I shot and edited a short video of the event which I've posted on Youtube. You can click the title of this entry above or go to:
http://www.youtube.com/watch?v=5hMzG_jq2Gw
to view it. I hope you enjoy it. Let me know what you think of it.

The Remembrance Day parade is a spectacle of pageantry, pomp, power, and patriotism. It really conveys the dynamism of a vast Civil War army on the march. And I think that it may be reenacting at its very best. I highly recommend that you put next year's Remembrance Day on your calendar. Dress warm, grab a hot soft pretzel from Trader Vic's, and I'll see you curbside next November!
Posted by Mannie Gentile at 4:38 PM

Great stuff. . .
An excellent post. Keep up the great work.

Nice video of the parade. I went to Gettysburg this past weekend but missed the parade.

Mannie,
Nice Blog and great pics on the parade. I was there and if i had known you were I'd have stopped to chat. Spent Friday in the Gettysburg NMP Military Library with John.
Marcia

Oh, Ranger Mannie, you are so informative (and adorable!).
Come up and see me sometime...
Beata

PS Love the photo of March!