I've been getting quite a bit of feedback regarding that photo of me on Harry's Bull Runnings blog. The comments are focused on the wall of helmets behind me.

I have just over 100 combat helmets, all but one from the 20th century. That oddball is a very beautiful 1881 U.S. Cavalry helmet.

I've been collecting helmets since 1972 when some shipmates and I were boonie-stomping on the island of Guam where we were all stationed as young Navy radiomen. We were exploring an area around the village of Yigo ("Jee-go") which was the scene of one of the last stands made by organized Japanese forces.

Crawling on our bellies into a spiderhole cave which was half filled with water, we inched our way about 150 feet into the base of a ridge line. When we got to the source of the subterranean spring we found a Japanese helmet, buckles, teeth and other human remains. There were about six of us cramped in this deep, dark, cool, wet resting place of a Japanese soldier on this speck of an island in the middle of the Pacific. In the beams of our flashlights we started conjecturing about the circumstances that drove this long-ago soldier into the depths of this hillside.

We had our own war going on in those days, and bore none of our fathers' malice toward the remains that shared this space with us. It seems strange, in retrospect, how long we lingered to consider the life and death of a Japanese G.I. from that different war. 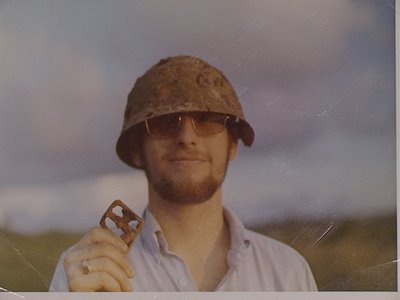 (U.S.Navy Radioman Roger Jacobs emerges from cave with helmet and buckle - 1972)
We returned to the surface, taking the helmet with us. Crawling back into the tropical sunshine, all introspection passed and again we were a bunch of jocular, knuckleheads in Uncle Sam's Navy, simply looking for the next adventure. Even so, that time in the cave stuck with us. And when I get together with the one old pal I've still kept in touch with, our conversation often turns to the afternoon of the helmet.


That helmet, now completely out of any historical context, resides here on South Mountain with me. Sometimes, when it catches my eye, I find myself wondering about the life of the young man who wore it to Guam but not back home again. 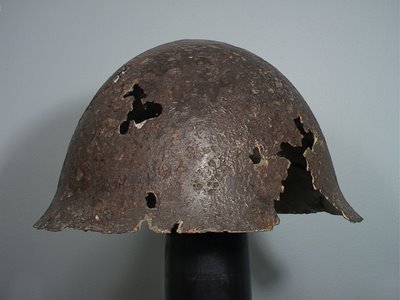 There is something about the very personal nature of a combat helmet that I find very compelling. Some guy wore it through some very difficult situations and may or may not have made it home again. Helmets aren't grand or dangerous, they've no moving parts, and they're totally utilitarian and characteristically drab. But a helmet suggests to me the thinking person who once wore it into combat; a young G.I. just like many of us were, once upon a time.

As all of us Civil War hipsters know, functional helmets came long after the ACW. The G.I. of the war that we study had headgear that protected him only from the sun and rain. The steel helmet is a quantum leap in the protection and welfare of the soldier, sailor, or Marine who wears it. I guess there's something very optimistic in the nature of the "tin lid"...everybody's entitled to hope that he, or she, is going to make it home alive.