We've been in our house for a month and a half and are still settling in. Virginia (my totally groovy wife) has been priming and painting like a madwoman. I've been cooking up a storm...nothing like garlic and onions to exorcise the fragrance of the former owners. Okay, Smell is an important variable in home-ownership.

Speaking of which, today I undertook the cleaning of the tiny henhouse that I'd like to eventually turn into a forge/workshop. After two hours of pretty loathsome work I made a dent and also got a sneak preview of purgatory. Several years worth of accumulated chicken droppings approximate a sort of ersatz concrete...not quite cement, not quite organic...definately not fun. I picked the coldest day of the year (thus far) to tackle this task as the molecules would be moving VERY SLOWLY (read "not smell so bad"). If I can salvage this structure, and I'm sure that I can, I'd like to have a space to do some rudimentary blacksmithing (Youtube forthcoming on this subject).

Beyond home improvement, I'm still trying to find time to edit a Youtube movie about the 18th annual Antietam Illumination. This project seems to get pushed further and further back on the rearmost burners. 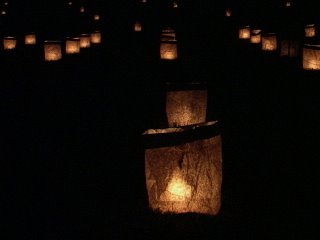 I'm also percolating a second blog installment regarding the growth of Antietam National Battlefield over the years, especially the physical evidence that remains of recent changes in the park, those of the last 15 years of so. Evidence includes pavement leading to nowhere, abandoned boundary lines, and tumble-down chicken coops. 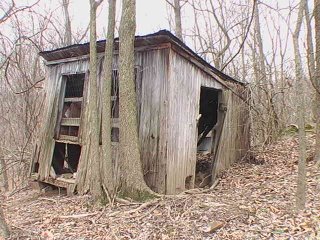 In other developments, a new reproduction gun carriage has been delivered to the Burnside Bridge parking area. This beauty is going to be teamed up with one of our rifled tubes (one of those occasionally thought to be "abandoned" by some visitors) in our maintenance yard. 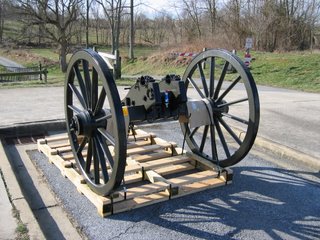 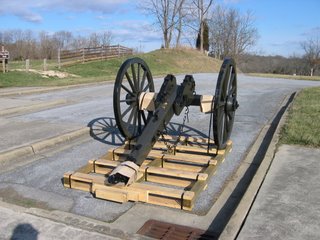 The completed gun will probably be used to represent the position of George W. Durrell's battery during the Ninth Corps attack on the bridge and advance to Sharpsburg.

Yesterday I gave an orientation talk that fairly typifies the winter season at the park. I had just two people, a married couple from Illinois. They asked the best questions that I've ever been asked by visitors. It never ceases to surprise me, how many regular people (neither authors nor bloggers) have a passionate, and open-minded, interest in America's Civil War. Like me, they were Midwesterners, and like me, they had grown up on the prejudices of the historians of the 1950s and 60s.

For my talks these days, I prop up my two photos of Lee and McClellan and remind them that Lee was not the infallible saint that the "lost cause" historians have left us with, nor was Mac the cautious idiot that the historians of the centennial era (Palfrey not withstanding) painted for us. History is always much more complicated, and interesting than the dumbed-down versions, and the American Civil War is one VERY interesting story. They liked that.

Hello Mannie This is most likely the wrong place to be leaving this post, but couldn't seem to find a more proper place. Really enjoy the photos of Antietam and Gettysburg(especially the fawn). I wanted to see if you had heard about any books being worked on dealing with the battle, troops engaged, etc. I thought I had heard at one time that Scott Harwig(I hope I have that right) was working on a study of the campaign. I'm an avid book collector and always enjoy hearing about upcoming releases.