Time for a change(click here)

Is it February already? Note my archives and you see it's been a year since I started this blog.

I know that many blogs fall by the wayside within that critical first year. As events and happenings at Antietam are on such cyclical calendar, the danger exists that my postings could get repetitive.

"Hey! Did he just recycle Artillery weekend '06 instead of making a new one for '09?"

I won't do that. Instead I'll limit my entries to one per week and have them be as interesting as possible.

At the same time, I've launched a new blog at:

This blog showcases the cartooning that I've been doing over the last 40 years, specifically the work that I did in the 1980s for a monthly cultural arts publication in Grand Rapids Michigan entitled "On-the-Town" (originally "Downtown").

Although its not related to the Civil War, I did manage to sneak an occasional reference to the ACW between its covers. 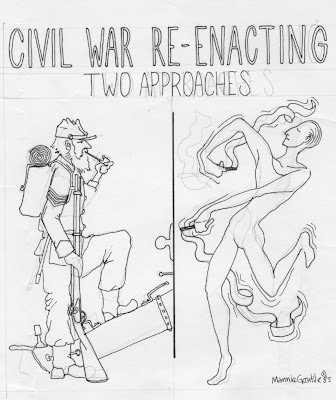 This cartoon, like many that I'll be posting still has the photo-safe blue sketch lines as well as some original "cutting and pasting"

I invite you to check in from time to time. Let me know what you think.

And do scroll down for an update on the Burnside Bridge vista (part two).

I know that I personally would enjoy reading posts about various parts of the battlefield and I've also enjoyed your recent posts about the restoration efforts at the park.

Keep up the good work and I look forward to reading more.