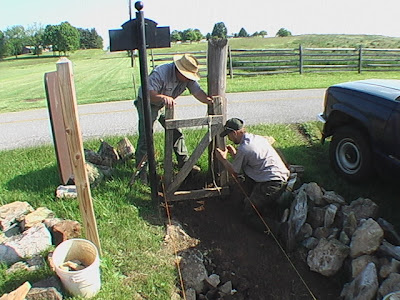 Today was a red-letter day at Antietam. Rolf, the master wall builder, set his form and level for the final time on the magnificent Hagerstown Pike wall. 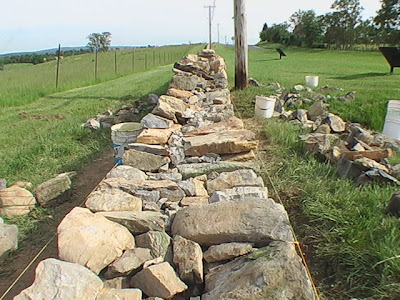 (cross-section...no mortar of any sort)


One year ago I posted a piece on the long, dry-laid, stone wall that Rolf from the Cultural Resources Division of Antietam National Battlefield has been working on for years (http://volunteersinparks.blogspot.com/2006/05/robert-frost-on-rolfs-wall.html). You can click on the title of this post to go back there.

Knowing that he's been coming down the home stretch for the past month I reckoned today would be a good day to drop in on him and his assistant, Andy, to see how things were progressing. It was the ideal moment.

The morning was perfect, crisp and clear with the scent of new-mown hay in the air. I approached Rolf just as he was setting his "a-frame" wall form for the final time on this project. 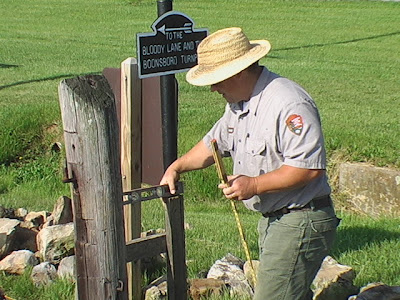 He was happy to see me with camera in hand as all three of us knew that this was a special day.

Rolf has been working on this project seasonally (March through October) for seven years. How many people do you know who can account for every day of their labor for the last week let alone the last seven years? Rolf needs only to look back at the half mile or so as his wall rolls on toward Sharpsburg.

As Rolf leveled and squared his form I looked toward the near horizon, 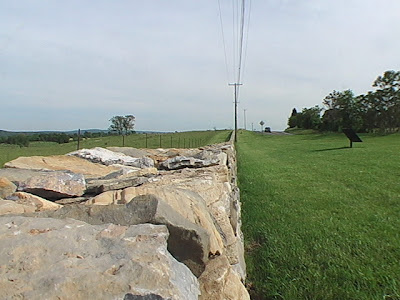 his perfectly uniform work of art marches up the hill and beyond. What an elegant accomplishment; simple and sublime. There's no reason that this beautiful wall won't still be there to greet the 250th anniversary of the battle.

Throughout April and May I've been having my lunch every Friday with the folks at Cultural Resources, and they are a fine bunch of banannas. I've really enjoyed getting beyond just a nodding acquaintance with Rolf and Andy. They are emblematic of everyone in that division, hard-working, incredibly talented, and very funny. Recently Rolf told us over the lunch table that "a stone setter is nothing but a carpenter who's had his brains knocked out" or at least that's what a carpenter told him. That got quite a laugh from all hands, especially because of the irony of the statement. 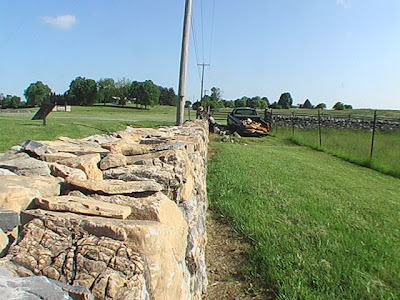 This particular stone-setter, the powerfully built and affable Navy veteran, has created an enduring piece of functional art and all with his bare hands, an intuitive knowledge of each stone, and a very keen eye. 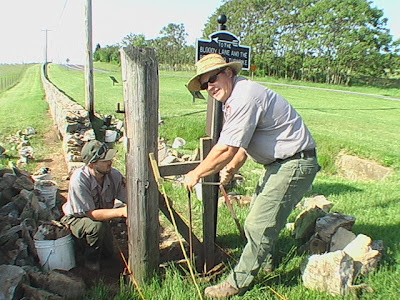