Over the recent quarter century there has been quite a proliferation of Civil War art. Some of it is pretty good much of it is only mediocre, and some is quite dreadful. All too often Civil War art seems overly influenced by stills captured of overweight and overwrought reenactors plying their hobby in painstakingly accurate uniforms under ideal lighting conditions.

A few years ago, before I moved to Maryland, the local art museum in my town mounted a wonderful show featuring works by the American artist Winslow Homer.

As an illustrator for Harper's, Homer was sent to the front of the actual Civil War to capture imagery of both the momentous and the mundane.

I challenge any modern CW artist to capture, with such authenticity, that which flowed from the eyewitness pen and brush of Winslow Homer. 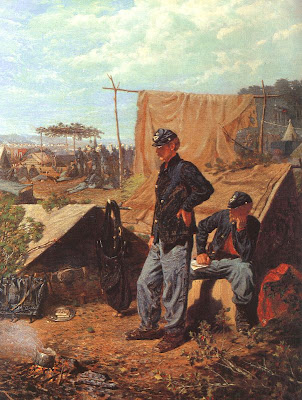 "Home Sweet Home" My gosh, is that a "she-bang" in the background? And would reenactors approve of all of that "brass" on the kepis? 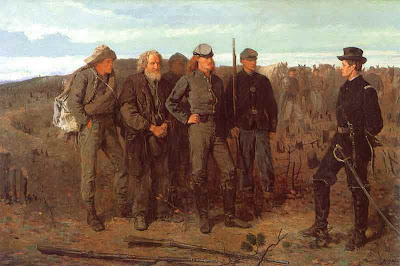 "Prisoners from the Front" 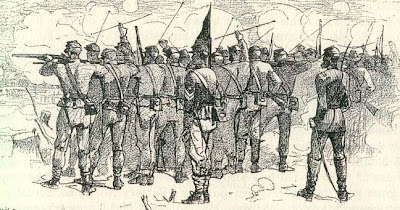 The dynamism of the ramrods almost makes this simple illustration seem animated. "Infantry in Action" 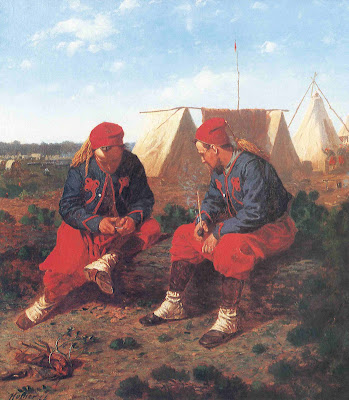 I can almost smell the tobacco smoke. 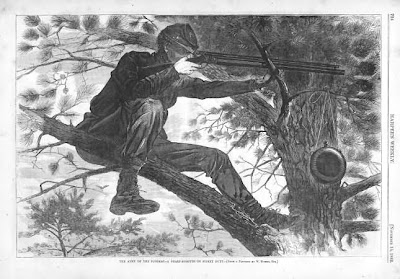 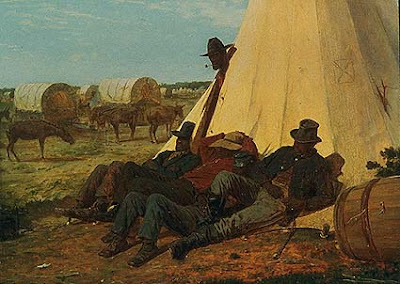 A testimonial to another kind of contribution during the war, lounging black teamsters in Homer's 1865 work " The Bright Side" One can almost hear the mules braying in the background as these men get a brief respite from moving an army. 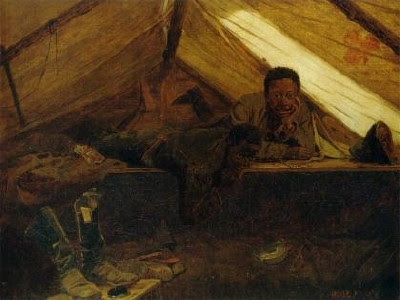 "Army boots" is another study of black participation in the war. The glow of the canvas is unlike any detail I've seen in recent ACW art. 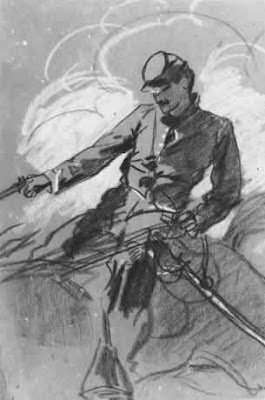 "Cavalry Soldier on Horseback" This is one of the works that I was able to view close-up at the Grand Rapids Art Museum (Michigan) shortly before I left. This is Homer at his most deft... 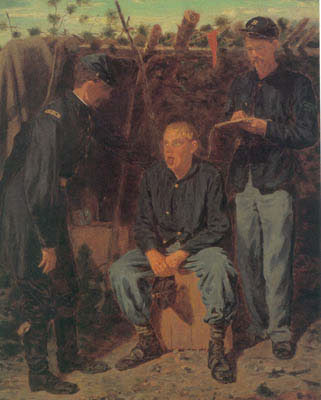 ...and this may be Homer at his most comic. "Playing the Old Soldier" finds a young malingerer who just may find the cure worse than the detail he's trying to escape from. 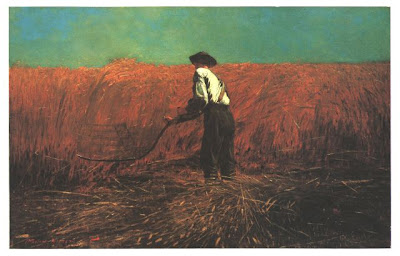 This is, perhaps, my favorite piece of Civil War art; Homer's "The Veteran in a New Field" (1865). One can only imagine the relief that this returned soldier feels as he picks up the tools he left behind a lifetime ago.

The best Civil War art has been around for a long time, celebrate it.

I’ve been going around to all the Civil War bloggers to let them know about our new book, the Historic Photos of Gettysburg by John S. Salmon. Tom Churchill of the www.18thmass.com/blog site has already reviewed it, and I have a link to a book trailer showcasing some of the photographs within the book, http://bookmarket.ning.com/video/video/show?id=523145:Video:6499. If you’d like to post a review online as well, I’d be happy to send you a complimentary copy. The title is done in a large format, 10x10 and all images used are culled from several archives that represent rare or never before seen photos. There are the more famous ones included as well, to round out the pictorial narrative and tell the story of the Battle of Gettysburg and its aftermath, including several reunions and shots of the park and how it’s evolved over the years.

Also, if you are a fan of military history in general, it might interest you to know we have a picture book coming out about Theodore Roosevelt as well, and its book trailer is here: http://bookmarket.ning.com/video/video/show?id=523145:Video:10483.

Thanks, and I hope you don’t mind me dropping you a line to let you know about our book! Talk to you soon.

Thank you for the generous offer, however I must decline.

Although I make it clear that my blog does not reflect the views of my various employers (including the National Park Service) I can't let it appear that I'm accepting gifts or favors based upon my status as a Ranger at our nation's finest park.

Though, again, I thank you for your kind offer, I cannot accept.

Have you seen this page:
http://www.civilwar.si.edu/homer_intro.html