"September Storm" is the name of the big reenacting event being held outside of Boonsboro this weekend. In observance of the 145th anniversary of the 1862 Maryland campaign and the battle of Antietam.

A couple thousand reenactors have descended upon the valley as well as their attendant posses, entourages, families, camp followers etc. all making for much hoopla and increased weekend visitation at the National Park.

One large group of Confederate reenactors recreated A.P. Hill's 17-mile, seven hour march from Harper's Ferry to Sharpsburg. They took a little longer than Hill's men though, with an overnight in Sheperdstown, arriving at the outskirts of the battlefiled by about eleven o'clock in the morning.

Ranger Keith was there to greet them and provide a weapons inspection (a requirement of all groups bringing replica firearms on park property).

It was a fatigued but good looking group with some mighty fine impressions. 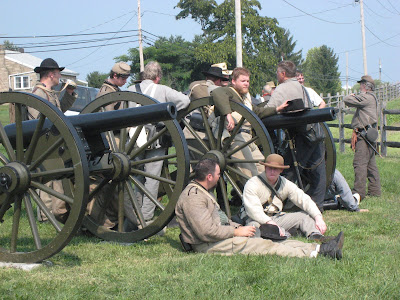 Reenactors taking a breather upon reaching Sharpsburg, good thing they don't have to do battle with the Ninth Corps this time around. 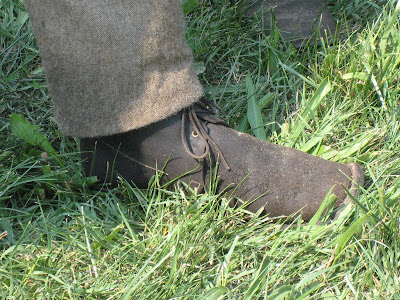 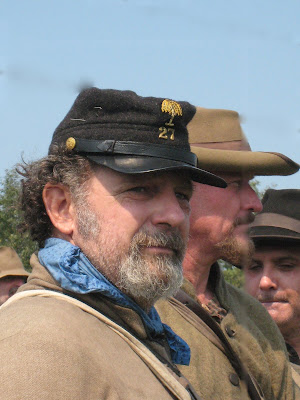 Pretty nice impression, this group had some very convincing rebels in it. 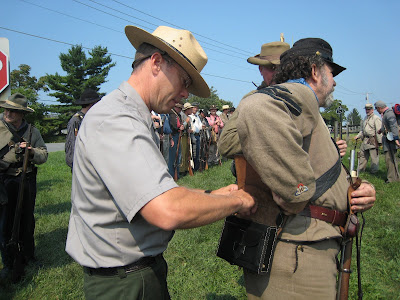 Ranger Keith makes his way through the ranks insuring that all rifles are unloaded and that all cartridge and cap boxes are empty...M-T! no exceptions. 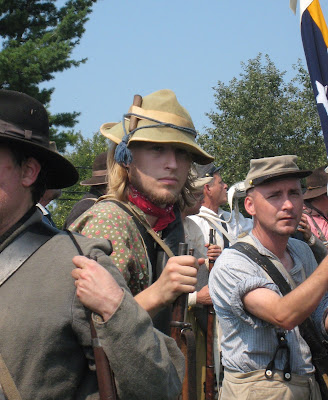 Fierce young reb doesn't scare me. That big, fat, stinky seegar in his hatband will probably do him more harm than a million reenacted bullets.

And this activity is just the beginning of a very busy week. For a full slate of all the park's battle anniversary events go to:

Hope to see you at the park next weekend!

Ranger Mannie
Posted by Mannie Gentile at 8:01 AM

Hey Mannie,
was it really a 17 mile march from Harper's Ferry for A P Hill? I have a good friend in town who does not agree, saying it is only 12 miles. NPS Rangers do agree(after all, it is on all the brochures). I was re-reading Shelby Foote's Volume One the other night and he wrote 12 miles as well. And how much time did it take? Just asking.

Looking forward to a discussion this weekend.