The Blogger's gun at Antietam

When fellow Civil War bloggers show up at Antietam National Battlefield I always try to get a picture of me and them beside the Parrot gun in front of the visitor's center.


Here's a cool pic of Me and Kevin Levin in front of that gun ("Civil War Memory" http://civilwarmemory.typepad.com/civil_war_memory/). Our visit was far too brief. Kevin's a person that I'd like to spend some time discussing the current state of education with over a sixpack. 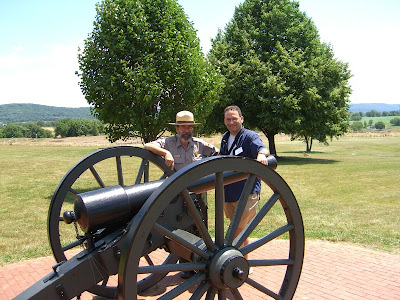 Okay, use your imagination here. Pretend the Ranger in the middle is Michael Aubrecht...just go along with me on this one.

Hey look! It's fellow bloggers John Hoptak and Michael (not "Mike") Aubrecht at the blogger gun last year when Michael and his father Tom came to visit the battlefield. Michael (center, with someone else's face) was very gracious and provided me with a pair of his fine publications. Michael's a rebel, a gentleman, and a real nice guy. And speaking of nice guys, batting cleanup is John Hoptak; my friend, fellow ranger, and blogger Note that neither John or I are wearing our hats backwards. 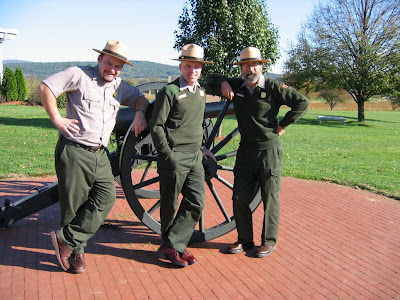 
The dramatic clouds overhead herald the arrival of two heavyhitting ACW bloggers this past battle anniversary. We have Harry Smeltzer (left) and Brian Downey (middle). Harry's a groovy guy who, again, I never get enough time to talk with. His blog "Bull Runnings" can be reached here: http://bullrunnings.wordpress.com/ 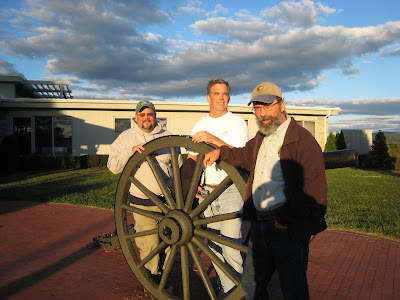 Brian has the best (bar none) Antietam site and the chin of Bruce Campbell...what more could any guy want? Keep up on our nation's finest battlefield by going to his blog "Behind Antietam on the Web" (http://behind.aotw.org/). 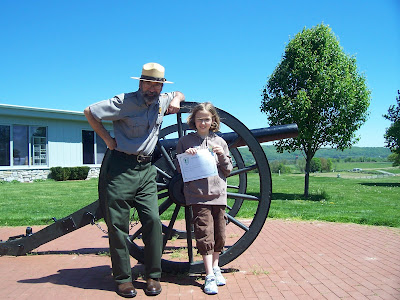 This is Sarah Beeghley. Sarah's not only an Antietam Junior Ranger, she's also an authority on Civil War Nurse Clara Barton. Her dad is fellow blogger Jim Beeghley who posts at "Teaching the Civil War through Technology".
(http://www.littlestregular.com/blog/)


Now comes my favorite picture. I really like being around people who are smater than me (like everyone in the pix above), but here's a trifecta of smarty pantzes. 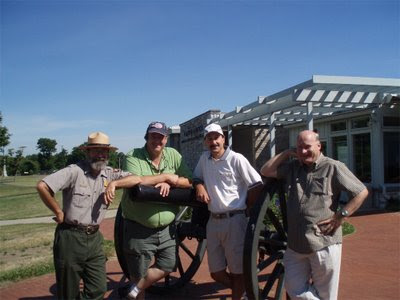 Eric Wittenberg, J.D. Petruzzi, and Dimitri Rotov. When these three let me know that they were going on my battlefield tour I decided to not be intimidated but to simply provide them with the best two hours of their day. We had a fine time. This picture was the inspiration for what is still my favorite post on this blog, please check it out, I think it will amuse you.

Dimitri's blog, (perhaps my favorite) "Civil War Bookshelf", which always provokes me and always makes me think, can be found at: http://cwbn.blogspot.com/

Eric and J.D. are partial to cavalry and have done some outstanding work in the field. I guess I'd refer to them as experts.

Eric Witteberg's "Civil War Cavalry" (http://civilwarcavalry.com/) is always interesting. Eric's even more liberal than I am which often leads to some really interesting screeds on his site.

J.D. on the other hand has that more cool Dean Martin, Italiano, approach to life, always cool, always "yeah baby", at least that's how he struck me at our brief meeting at the blogger gun. J.D.'s blog. "Hoofbeats and Cold Steel" (how cool is that?) can be reached at: http://petruzzi.wordpress.com/

So what is it about this 10 pound Parrot gun that attracts some of the coolest people in the blogosphere?

Perhaps one day an enormous gathering of ACW bloggers will converge on this particular gun. And if you do...

Thanks Mannie. I needed that friend. I'd send a photo of us, but I think your treatment is far better! :)