One of my favorite and funniest memories of my first ship, the destroyer USS DeHaven (DD-727), comes from a time when things in the Navy were not particularly jolly. Things in Vietnam were winding down for the U.S., the gap between civilians and service members was widening and there seemed to be a growing hostility between the four-year enlistment sailors and the career men...you know, "the lifers".

This was also a time when drug and alcohol abuse was rampant throughout the services, and the 727 was a microcosm of the Navy and many of its problems in those dreary days. That's the deep background to provide some context for this story.
Some time in 1972 we were tied up, as usual, along piers 17 and 18 out on the mole at Navsta Long Beach. It was a typical duty evening on an in-port weekend.

I was the duty radioman (RM3c) having a pretty laid-back evening. We didn't have the radio guard so I had little to do but read. I was still a new guy and was having only limited success making friends with guys in other divisions (remember being the "new guy"?).

Along about eight in the evening my boss, and good guy, the RM1 of the shack came zooming onto the messdecks with a battle lantern ...looking for me. My boss was the duty Master at Arms (the ship's policeman) that night, resplendent in his new style utilities (remember those dreadful duds that they tried to replace the good old dungarees with?) and his dazzling MAA badge.

"Mannie" he said breathlessly, "come with me". Now I was a sailor who was always ready to oblige a shipmate, so without question or hesitation I followed my RM1 off the messdecks up to the radioshack.  "What's up boss" was my only question. He made a finger to the lips gesture to clue me to pipe down and scowled, and sniffed, at the overhead ventilation duct.

"Do you smell that shit?" he whispered. "That's 'green smoke', and it can only be coming from one place". A historical note: For some reason, there were those among the senior enlisted who referred to marijuana smoke and the smell thereof as "green smoke". I even met those who insisted that it was called that because the smoke of burning cannabis is emerald green.  Obviously, they'd never imbibed themselves.

Back to the story. The RM1 moved his intent gaze to me and repeated "there's only one place that that smell can be coming from. Someone's smoking dope in OUR fanroom!" There was a fanroom just abaft the radioshack on the starboard side. Accessible only with a stepladder through a scuttle in the overhead, it was a space the RMs referred to as "the void" and it was where we stored our supply of teletype paper and tape. For zone inspection purposes it was the radio crew's property and responsibility. "Let's go!" hissed the RM1 as he handed me that battle lantern and pushed me out the door of the radio shack ahead of him. Had I been a cartoon character at that moment my word balloon would have said something like "buh, buh, buh...ahhh wait a second".

Off we went into the dark of the night the RM1 becoming quite impatient with all of the noise I made as I clumsily followed him. "Quiet! or they'll know we're coming" he whispered. "That's, sort of the whole idea" I thought to myself. We made our way to the main deck, me with the lantern and the RM1 armed with a rickety stepladder which he quietly set up beneath the scuttle. "Now get up there and bust those guys" he said to me, at that time I was choosing to believe it was merely a request rather than an order. "But boss," I protested, "these are guys that I have to live and work with, and I've got no beef with them, cause, y'know..." It was as if he hadn't heard me, like a fine hunting dog on the point he was intently staring at that overhead scuttle and just as intently pushing me up the ladder.

The "why me?" question was simply one of girth.  Without commenting on the build of the RM1, I'll just note that at that time in my life my broadest dimension was my post-adolescent Adams apple: 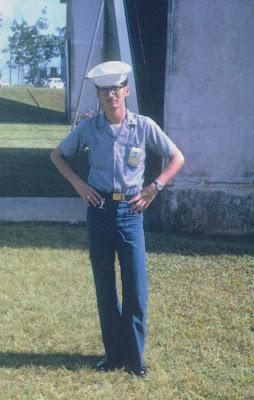 I was the logical choice to go through the scuttle and into the Babylon above. This was to be my show. With my head pressed nearly sideways against the overhead as I wrestled with the dog-wheel I could hear indistinct murmuring coming from the space. As the dogs retracted, I slowly swung the hatch down, swallowed hard and poked my head up. The experience was unlike any I've had before or since. If one could stick ones head inside a bong at a frat-party that might approximate the sensation I had. As my nostrils cleared the coaming of the hatch I became immediately aware of an all too familiar aroma...in spades...That was one smoky space and because it was a fan room, that smoke was being communicated throughout quite a bit of the ship.

"I don't see anybody boss" was my very lame report.   "Jeezus! use the lantern!" he shouted (the need for stealth was now past). I craned my head over and squeezed my arm and the battle lantern through. I snapped on the light, the beam of which became a ghostly and thick illumination of smoke. My head poking through the scuttle, eyes only ten inches above the deck, I slowly played the beam 360 degrees around the space level with my eyes.

That smoky beam revealed fully a dozen pairs of shoes; oxfords, boondockers, flipflops, all attached to pantlegs that extended up into the faceless gloom.  The sound was that of breath being held by twelve shipmates caught red-handed (though all I saw was ankles).

"Well?" was the sharp one word question from below. Now, remember, I was a sailor who was always ready to oblige a shipmate, so again, without question or hesitation, and with great presence of mind I gave my report:

"They musta' just left boss, nothing up here but teletype paper."

"Dammit!, we shoulda' come quicker!" Clearly disappointed at losing his quarry the RM1 had me secure the space, the ladder, and the battle lantern. He went off into the night looking for other crime to fight.

No sooner had I gotten settled in with my book, back on the messdecks, than a mix of snipes and deck division types slid in next to me and one pipes up: "So Gentile, you just got off Guam eh? Whatcha readin'?". And a lively, breezy bull-session began, of which I was a full partner. Eventually every one trailed off to hit the rack or relieve the watch. I realized that my status as the new guy was coming to a welcome end.

P.S. I like how THIS was story you chose to commemorate Veterens Day. Haha.

What a great story. Thanks for that.

Such a great story Mannie, alot like the ones I heard from a boyfriend I was dating about that time who was station on a ship in Long Beach Ca. just back from Vietnam.
Susan