The loss of a drinking buddy

It was bound to happen, its just the completion of the great circle.

He showed up on my porch last September. A good listener, with a shared interest in 20th Century combat helmets, and Budweiser.

I wonder now if "the king of beers" may have been his undoing. Its not for me to judge. He chose his rough-and -tumble outdoor lifestyle. To call him "homeless" would have been patronizing. The outdoors was his home, and he was clearly the master of his natural domain. Most of his peers were terrified of him, and for good reason.

He was a killer, cold-blooded and instinctive, this I knew and accepted.

There was something so compelling about his poise, and athletic grace that captivated me. I was also won over by his trust in me and his acceptance of my hospitality, and oh, how we did merrily hoist more than a few steins as the evenings grew shorter.

But now, that's all in the past.

This afternoon my wife found him, or at least the mortal remains of him under an icy shroud in the bushes of our sun porch.

Had he been trying to return for one final round? Or had he simply been there, all along, unnoticed?

May the great hunter rest in peace. 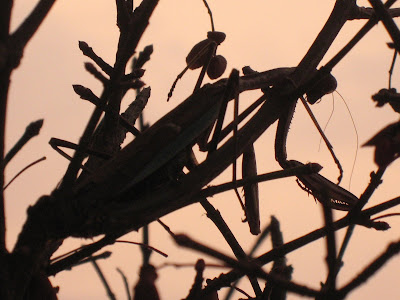 Click here for a YouTube of he and I in happier times (then it'll all make sense).

Beautiful. Mario Lanza, what an actor. Mannie, you are so wonderfully twisted.

desolationdan.blogspot.com/..just created a Blog...Definitly love what you have created online bud...I quit drinking a long time ago but up on the hill or in my yard after gardening a Guiness Stout sure hits the spot..

You absolutely crack me up!

Mannie, I'm sorry for the loss of your drinking buddy -- but I agree with Harry -- that was one of the most wonderfully twisted things I have ever seen!

Mannie!
You ARE a nut! Only you would even think of it! Have a cold on and think of me!