After baking three loaves of French bread I'd decided the day had warmed up enough to go for a hike. So my one day off in the week found me, where else?

Last week there was a large prescribed burn on the Otto Farm acerage. The job was very precise. I only wish I had been there to capture it on video. 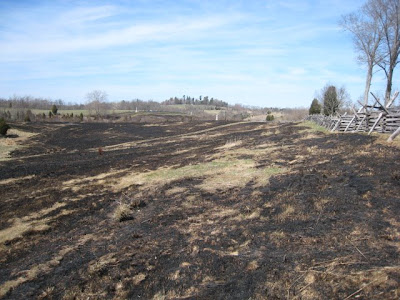 I enjoy hiking burned over areas. So much becomes revealed which had previously been hidden by underbrush; 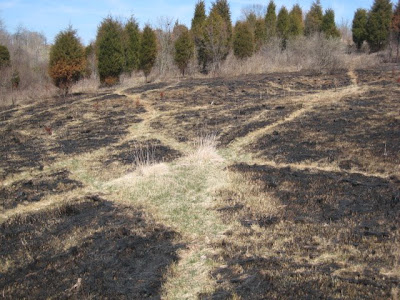 like the compacted deer trails that criss-cross the battlefield year round but usually only become visible when snow is on the ground.


Visitors are often surprised by how large the deer population is at the park. On today's hike I encountered these two antlered skulls. 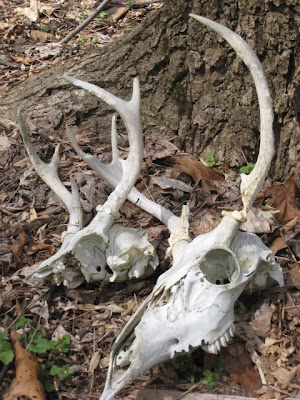 Early spring is the very best time for finding skulls as there is no brush and the brilliant white of the sun bleached bones stand out in stark contrast to the dun colored turf. Think about that for a moment. I'm sure that for a generation after the battle the people of the Antietam Creek valley became acutely aware of that simple fact.

I wonder how much time had to pass before deer skulls became more commonplace than those of lost soldiers on the fields of the now peaceful and beautiful ground. It gives one pause.

Come ponder for yourself,

Just outside of Sharpsburg.

By the way, when you do encounter bones, skulls, relics, feathers, snakeskins, etc on National Park lands., leave them undisturbed, but take as many pictures as you like.
Posted by Mannie Gentile at 4:00 PM

How many control burns take place down there on a yearly basis?? And yep, I can hear some tourist asking you if those skulls have been there since the time of the battle in 1862. :)

Hope all is well, and thanks for the pictures.

Since I've been here, it's been about one burn a year.

Weather, human resources, and accumulated fuel all have to coincide to make it happen.