Youth in peace and war

Two interesting things coincided today, both made me think of the American Civil War.

At Rhino virus Elementary School this afternoon I witnessed an event much chronicled by Civil War historians and field commanders alike.

One of my first graders got her eyes kicked full of the mulch that comprises the soil of the playground. Imagine this adorable little tot running up to me with eyes clamped shut, tears flowing, and sobbing with pain.

I dispatched this young playground casualty to the school nurse with one (note "one") reliable kid as a compassionate guide for our temporarily blinded Alice. No sooner was my back turned to the situation than five more first-graders rushed off to help her make her way to the rear-area. How many times have we encountered that same phenomenon among Civil War soldiers, eagerly rushing to help a wounded comrade and simultaneously escape combat (the spelling test).

The other thing that occurred today that put me in a Civil War frame of mind was a set of pictures, pictures I'd never seen before, emailed by an old and dear friend, from way, way back in the Navy days of the very early 1970s. 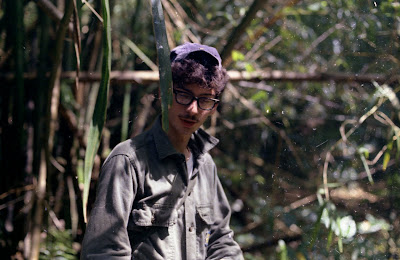 This picture of me as a young GI, at eighteen years of age caused me to reflect on all of those others, of the same age, who moved mountains, saved nations, and defeated evil.

Me? I was just a very scrawny sailor on Guam, stomping around in the jungle.

Once again, you have brought back memories of the classroom. I can remember so many times stopping the "gang" headed to the office with a wounded pal . Never had put it together with the soldiers before but makes so much sense . The funny thing is they think you don't know why they are doing it.

The second part of the post was very moving. I love looking at the photos of the soldiers . I always look at the faces and wonder who they were and what happened to them. So many were so young. Then I think of the guys I knew who went off to Vietnam. They were so young too. Some came back. Some didn't .

Thanks again for the great site .
Susan

That young Mannie in the picture looks just a few seasons distant from having dirt kicked in his eyes on the playground.

Thank you for your service!