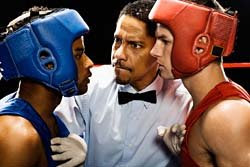 Once upon a time, in my classroom (the classroom I was subbing in) at good old Rhino-virus Middle School, at the very end of a day (a Friday) I saw what no teacher wants to see.
Two boys were squaring off for a fight.
I flew to fill the space between them with only one thought: "de-esclate".
Okay, two thoughts, the other was "I hope I don't get hit in the glasses".
A prompted (by me) apology on the part of one of the boys (Boy A) ended the affair, but what looked cut-and-dried was actually quite complex.
As the rest of the class was filing out to catch buses, clamber into the family jalopy, or simply walk home (this is an inner-city school) I conferenced (as they say) with the two boys.  Boy A, a completely good-natured kid who seems to get along with everyone was simply a victim of having delivered an unintended insult to the other boy, that would be Boy B.
Boy B is a really good kid burdened by problems at home and problems of the spirit.  I had been watching boy B since lunch, as he became increasingly withdrawn and sullen.  Experienced teachers reading this already know what I came to find out that afternoon: Boy B's meds were wearing off.
Boy B was becoming, for want of certain chemical compounds, a hissing fuse,  and I (rookie) completely missed it.  Looking back, I'd have sent Boy B to the room of another more experienced teacher on the team, giving him a chance to decompress.   I'll know that for next time.
Later, I brought this incident up to the other teachers on the team.  They agreed with my assessment regarding medication, and added something I'd never considered:
"school mourning".
"School mourning", the phenomenon of children (especially urban children) dreading the weekend separation from the predictable, familiar, and safe environment of their classroom, friends, and teachers.
"Fridays are especially bad" chimed in one very experienced teacher. "Weekends are the times spent with the non-custodial parent".
I didn't  think of that.
My hat is off, and stays off, to full-time classroom teachers.  For nine and a half months of the year they have to be cops, counsellors, confessors, nutritionists, parents (by default) and...oh yeah, teachers.
But heck, they get summers off.
Mannie
Posted by Mannie Gentile at 8:22 PM

I used to teach at a boys high school in the Bronx and the Friday before Christmas could be an absolute nightmare for that very reason.

Thanks for the postscript. I'd hate to have to be a kid these days.

Good Job defusing the fight. I first worked in an inner city school in the Los Angeles area. I remember a few fights I stopped. Got knocked down stopping one.
Even in sububan Orange County here at the beach I remember kids that hated Fridays because no school for two days with all the craziness at their homes. School is their only safe place . Now that is sad .
Susan
P.S. I never had summer off I worked summer school to pay bills.

Thanks, if these had been highschoolers it may have ended differently.

About half the teachers I work with also have summer jobs to make ends meet...a fact overlooked by so many taxpayers.