A fine point, but a point nonetheless 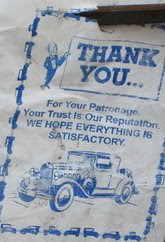 As a substitute teacher I occasionally have to go to inservice trainings which I enjoy because I always learn something new and useful. Also I get to rub elbows with other subs as well as administrators.

Whenever a new sub introduces his or herself as "just a sub" the admin folks and full time teachers positively fall all over themselves to quickly and emphatically exclaim: "Oh! never say 'just a sub', you're a professional teacher and an indispensable member of the team!"

They say that all the time. I've noticed that the older more seasoned subs shoot each other wry glances whenever that overwrought testimonial is given. Hmmmm...


Last weekend, I had two full time Rangers from another park on my tour, and they really enjoyed it and had some very complimentary comments afterward.   I always enjoy meeting other National Park Rangers, its the closest thing a seasonal Ranger gets to professional development. These were swell guys and it was really nice having them on my tour and swapping Ranger stories with them. We all had a pretty jolly time.

When they first introduced themselves, just prior to the start of the tour they mentioned that they worked for the government, and I asked "In what capacity?" and they said " GS-9 Park Rangers". To which I responded:

Not a beat was skipped before they said in unison with great sincerity "Oh never say you're just a seasonal".

This was strangely familiar territory.

And I had the presence of mind this time to quickly respond:

"Yeah guys, tell that to my health care".

Sure, the syntax is strained, but they definitely got my point.
I'd prefer to being doing this for benefits, but for as long as I'm able, I'll do it because I love it.
Hoping you're loving what you're doing,
Ranger Mannie
Posted by Mannie Gentile at 8:51 PM

Mannie, at least your actually called a ranger. (Seasonal of otherwise.) My official title is Park Guide, yet when I actually used that title it created a little confusion. (It did the first couple of days with even the NPS employees.) Still, since that's not my official job I always feel a little awkward calling myself a Park Ranger.

Hopefully someday soon the NPS will get the funding to make you a permanent ranger. (Maybe they'll even throw in the super hero cape for free.) Hang in there Mannie!

You wear the big hat and the badge and people look to you as a Ranger.

Go with the flow, if it quacks like a ranger...