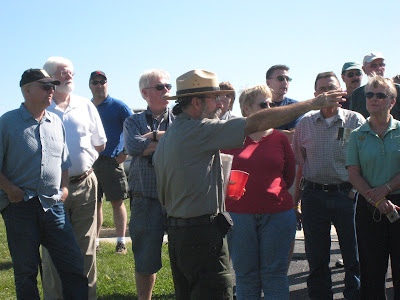 This is what I do. I tell the same story, with little variation, several times a day, every day of the year. For most of the people who hear the story, its a story they've never heard before; simply because it's not the same old story.
I try to be guided by this sage quote by Max Beerbohm:

"History does not repeat itself.  The historians repeat one another."


Many historians, it seems, tell the story of the battle of Antietam as though the participants possessed that which historians have (and so take for granted); 146 years of combined analysis of the battle.

The result being that we are left to judge the men of Antietam by higher standards than we are willing to be judged ourselves.

This year, I tried to bring some humility to my tours and programs, announcing up front to my audiences that, unlike most historians, I'm willing to make only two generalizations about the generals who met on the banks of Antietam creek to engage in the thirteen-hour struggle that became "America's Bloodiest Day".

1. All of the generals who came here, came here expecting to win.

2. All of the generals who fought here believed that they were doing their duty.

And for just about all of my visitors, this story, the one I tell several times a day, every day of the year, is new and refreshing ground.

Humility is a very good thing, especially for me, especially in my feeble attempts to describe the epic efforts of those who have given us the gift of our history.


I am very grateful to have this most humbling, and most satisfying profession, that of a Park Ranger in your National Park.
Mannie
...and thanks for sticking with me through 400 posts to this blog.
...
Posted by Mannie Gentile at 11:39 PM

That is a great way to frame the battle for anyone who is coming to the field to learn about it. It really puts a lot of the decisions made during the battle in perspective without a lot of the baggage we get by 2008 quarter-backing.

Just wanted to say thanks for not posting the same blog 400 times LOL
But seriously, it is a learning experience most every time and I look forward to hearing you for the first time "again."

Thass right, Mannie: Keep that contingency front and center. Your title for this post, by the way, reminded us of classic songs by AC/DC and the Standells. Rangers Noel and Eric

Yep, they were doing their duty-owning people, I belive these CSA DBs are patriots about as much as I believe someone landed on the moon. What's up with the sieg hail thing going in your picture Manuel? Mr. T would have sorted the CW out!

Ahh, but history can and sometimes does repeat itself, if not for folks like yourself whose passion it is to share these stories and educate about our past. It is in our history and the oral tradition of those stories where we find the lessons we must learn. Thanks for sharing this and thanks for the service you provide to the park visitors.