A couple weeks ago Rangers Brian, Alann, John (Hoptak), and I traveled to NPS headquarters in Washington DC ("downtown") to be a part of a little recognition thingy for the NPS folks who participated in January's presidential inauguration.  Of the zillions of park personnel who participated in the event a representative 200  or so turned out for the recognition event. 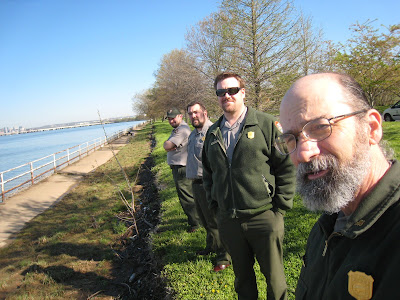 I always enjoy such gatherings as they're a nice way to meet NPS folks from other parks.  Its a reminder of just how big the Park Service is.  At the very end of the proceedings they took a group picture.

I'm the one with his hat on.
Mannie
Posted by Mannie Gentile at 9:49 PM

DC is such a great place for we history buffs. Did you check out any of the sites while you were there?

Not this trip, strictly business.

Lucky dog!! I soooo wanted to try to pull a detail! Was it as cool as I think it should have been!! Love the hat, btw.

Anna,
"cool"? no, it was downright frigid.

Go here for a look:
http://volunteersinparks.blogspot.com/2009/01/not-quite-what-i-had-expected.html

Best wishes for a great season!

Is it me or does that top photo look like a great album cover shot?

You've got me pegged! I'm a product of my generation.