I've lived in my mountainside cottage for two and a half years now. In that time this little garden shed sat in the backyard, underutilized, seldom visited, collecting junk, bugs, and webs. Only recently did it reveal its true purpose. 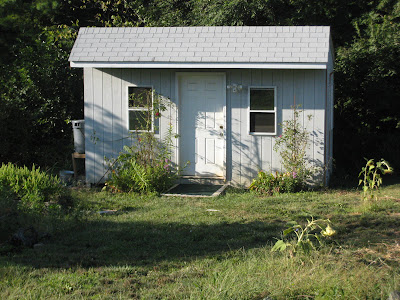 Now that I'm living alone I'm staying as busy as I can, always on the prowl for projects to fill the void. I decided to empty out the garden shed and consider what better use could be made of its 8 x 16 floorplan and tight roof. 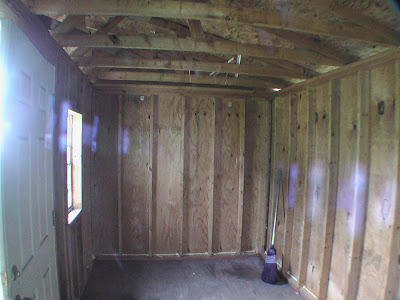 The first step was to run electricity to the structure. The soil around here made this a two day, pickaxe wielding chore. But I ran the conduit and Romex just as a record heat-wave descended into the valley. Nonetheless, the goal was achieved and two outlets and two sets of tracklights were installed.
Next came walls, wainscoating, ceiling shelving, work surfaces, caulking painting, indoor/outdoor carpeting, and two weeks later - today - I moved into my three season studio. 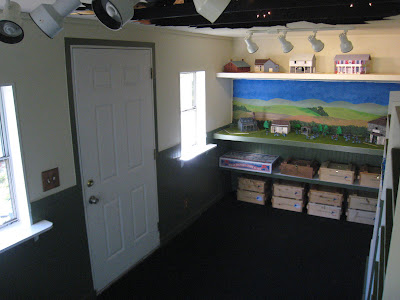 The ammunition chests under the counter house zillions of plastic 54mm ACW guys. 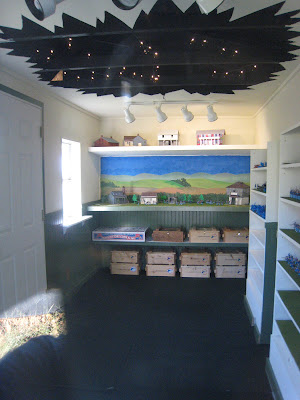 The ceiling is open to the sky to allow inspiration and fun to flow in while allowing worry and melancholy to flow out. Clever eh? Oh my, you can see the stars! 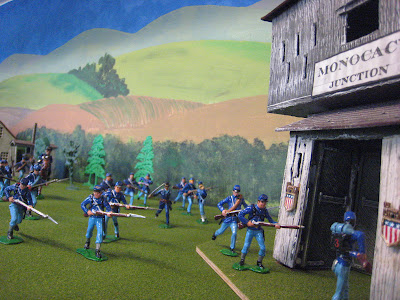 The primary counter top allows toy soldiers to run rampant over a painted Cumberland Valley whilst I'm away. 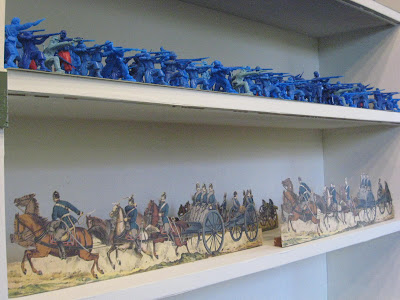 Upon my return, without fail, all troops resume their static position on the shelves; plastic ACW men above, paper Prussians below. 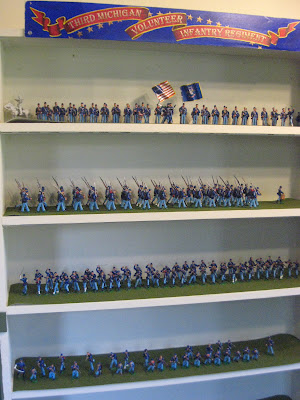 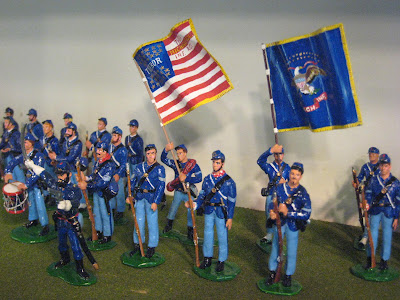 I'm hoping exactly the same thing about me. 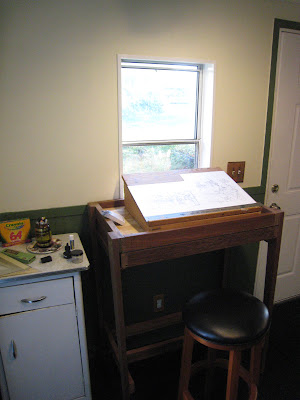 The space also accommodates my drawing table, where for three seasons of the year I hope to move lots of ink around in a productive manner... 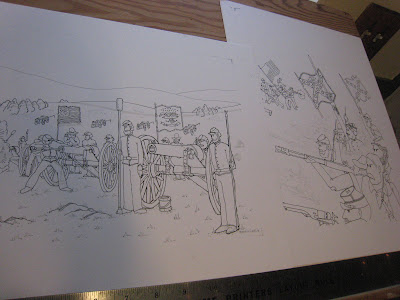 including work for the Park.
Eventually the shelves will be filled with soldiers and buildings, and an occasional battle may rage upon the green carpet.

If you're ever north of Boonsboro, give me a shout. Until then, wish me well. 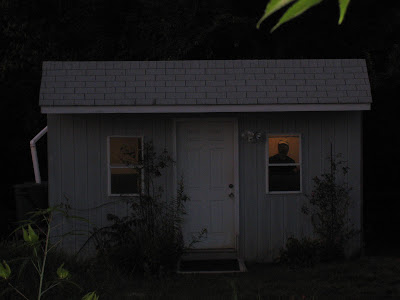 Posted by Mannie Gentile at 8:05 PM

Your transformation of the garden shed is quite impressive. I have followed your blog for over a year now and have been impressed with your creativity. Hopefully, I'll make it back east sometime to revisit Antietam--with any luck I'll get to meet you. I'm looking forward to reading about your future projects. By the way if you ever run out of projects come on out to Oklahoma--I'm sure I could find something for you to work on.

Inspiring stuff -- I really dig the ceiling. Also wanted to let you know how much I enjoyed your Ranger Walk on Sunday, particularly Gen. Sumner as a woodchuck -- your love for what you do really comes through. Bravo!

Outstanding work, Mannie! I wish I possessed a quarter of the creativity and workmanship that you have!

Looks great as usual Mannie, but where are the gray guys?!

A fighting phalanx of boisterous butternuts was deployed yesterday evening. Later this morning their mounted arm may be arriving on another shelf. I have little control over these guys.

Mannie,
Excellent work! That is a very nice getaway studio! You are inspiring me to update my workshop.

Jeff from Point of Rocks

Wow pretty impressive. I use my summer kitchen only store my bike and a few boxes. I really like the artillery battery artwork. If you're not careful you're going to make Gallon, Kunstler, and Troiani nervous.

Every person should have a hobby. It is the lucky one who has one so directly related to his place of employment.
Great work Mannie.

You are a man of many talents. Amazing work.

Great job on the studio. You're quite a handy guy. ~Gary