Not too long ago the Park received a wonderful gift from a West Coast benefactor; George B, McClellan's personal headquarters flag, hand-sewn by his niece, Elizabeth and given to him as a token of her affection.

This flag was, in all likelihood with the General at Antietam. 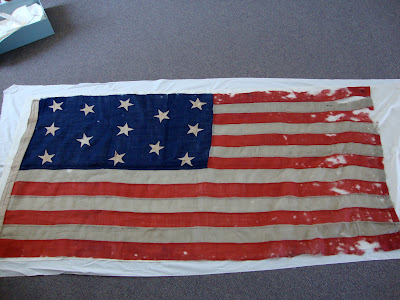 This is the flag as we received it.  Though its colors are still incredibly vivid the fabric is quite gauzy, fragile, and damaged in some areas. 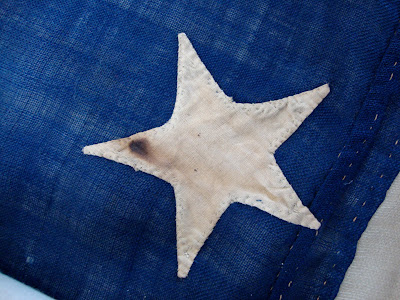 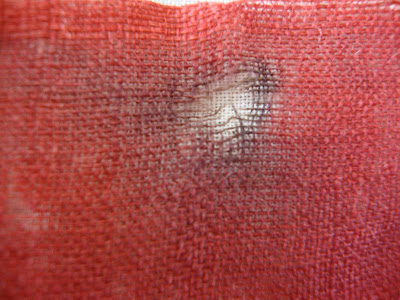 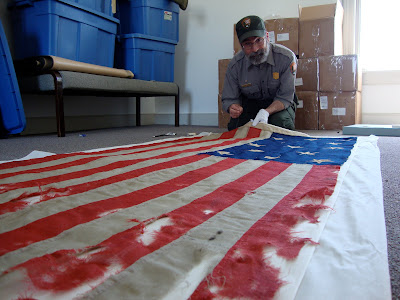 and some severe tattering.  My first assignment was to bring my years as a museum curator into play and carefully stitch the flag to a backing, using all archival materials.
Once the flag was stitched to the unbleached muslin backing the whole unit was quite sturdy and ready for mounting in a large vertical case in the Visitor Center museum. 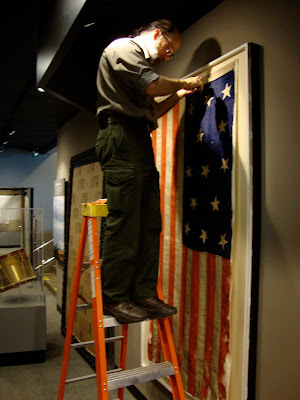 No weight or strain bears against the flag as it is the muslin backing that is sewn to the backing in the frame.  The flag is fully supported and gently going along for the ride.  In this instance the flag was hung with the field of stars to the right simply because young Elizabeth only appliqued the stars to one side of the flag. 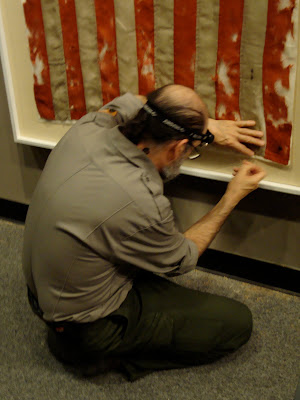 Gloves?  not while stitching, thank you.  Lathered and scrubbed hands are the acceptable alternative in an instance like this.   Finally. as the last of the supporting stitches went into the Muslin backer, the framed plexiglass cover was brought into position... and this is the spectacular sight that will greet visitors Saturday morning.

I have mentioned how much I love this job, haven't I?

Come see this wonderful artifact for yourself, just north of Sharpsburg.

Wow! Awesome! What an honor to be entrusted with this.

That is VERY impressive!

What an incredible way to spend the day! Thanks for your awesome work, Mannie. I do have a question: Do the 13 stars on the flag intimate that "young Elisabeth" was conceding the Confederate separation from the Union?

How awesome is this . I have got to get back to see that flag . I can see why you love your job.

More likely Elisabeth was a kid.

Mannie, what an honor to handle a tangible witness to history!! Any idea why the stars are only one one side of the flag?

Lucky stiff......I could get lost in something like this.

Keep up the great work Mannie

When regarding the number of stars as well as the fact that they're just on one side, consider this as more an example of Victorian era domestic arts needle-craft than anything like an official flag. Needle arts (like hair weaving was a big deal among Victorian era girls of the middle and upper-middle classes, and this flag, though larger than most, is quite typical of that sort of thing.

Elizabeth (the niece) may or may not have expected her uncle George to take this to the field as he did, if she had, perhaps she would have applied stars to both sides. Of course this is conjecture only on my part, which is one of the things that make hand-made objects like this so interesting and so delightful.

Mannie,
Just simply fantastic! I can't wait to see Elizabeth's and your handy work... Perhaps I can make next Sunday's walk.
Ron Dickey

Truly fascinating. I was not really familiar with McClellan's headquarters flag and what it looked like. Really informative. That is truly a wonderful piece to have in the visitors center.
Thanks for the excellent post,
Chris