What's wrong with this picture?

Several times this spring and summer antique car clubs have visited Antietam National Battlefield. Every time I see these classic old cars touring the battlefield roads I'm reminded that this park has been a tourist destination practically since the smoke of battle first cleared, Lincoln being one of the first visitors.

Cars full of touring families have been coming here since the pioneering days of the automobiles and the sight of autos driving across Burnside Bridge was commonplace until the late 1950s.

I was out in the parking lot last week getting some photos of classic cars and I was struck by this image, of a collector and his 1926 Model T Ford (which I have retouched only slightly and changed to Black and White). 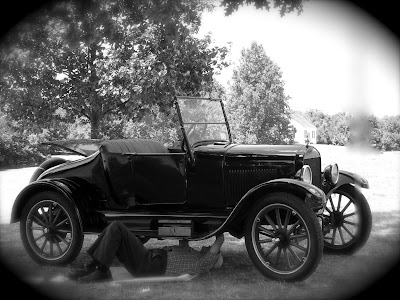 At first I was very taken with what could have been a typical scene in the early twentieth century, a visiting motorist doing repair work at the battlefield.

But on reflection, this scene could never have been photographed historically.

You may find it helpful to click on the image to enlarge it.

Ranger Mannie
Posted by Mannie Gentile at 11:57 AM

Could it be the cordless screwdriver on his chest?

That's not it, as a matter of fact I think screwdrivers have pretty much always been "cordless".

Keep looking (it's not his shoes either)

how about the plastic kind a tarp thing?

Are you referring to the presence of trees to the north of the Dunker Church? The West Woods were harvested and that area open fields if your photo was one from the car's period.
Ron

Is the the front license plate?

The electric power line in the trees?

Hi Mannie. Great photo! Could it be the Dunker Church in the background? After all, it wasn't there at the time this car was probably produced.

Is it the telephone wires?
Tom Shay

I thought the thing on his chest was a cell phone (blush). That out of the way I'm going to guess either the sheet of plastic he's lying on, or else the baseball-type cap he's wearing.

A man from the period would have been wearing a fedora. A viewing of old movies shows us these will adhere to the head despite fisticuffs, leaps off high places, gunshots not affecting the head of the wearer, and similar gravitationally-unlikely circumstances, so staying in place while lying under a (stationary) car would have been a piece of cake. :)

(anon because I am Not Authorized to Speak for Publication.)

Mannie,
I think '26 is the year Ford switched to standard electric starters. If so, then the crank in fornt is probably wrong. The tires don't look right either. But knowing you, it probably has something to do with the appearance of Dunker Church rather than the car....

Ah, I see the problem. Church was destroyed in a storm in 1921, and not rebuilt as Dunker Church till the 1960's. LOL - I've spent way too much time on this!

Hmmm - you are a sly one Mannie.

Could it be because the Dunker Church, as we see it in the photo, was destroyed by a storm in 1921 and not restored to the current appearance until 1962?

I suspect its the black sneakers the gentleman is wearing.

I see you already discounted that, although I can't see how they could possibly be more than a few years old.

I agree.....the Church was destroyed around the time the car was built.