Thursday morning the day started, for me, with a 6:00 a.m arrival at the park.  First light revealed a parking lot filled with vehicles from parks all over the region. 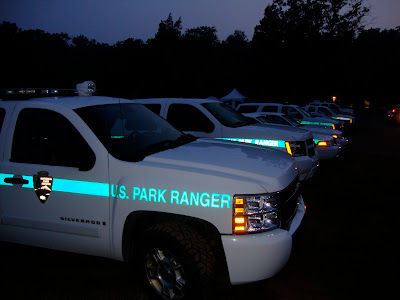 Events such as this provide a great opportunity to make the acquaintance of Rangers from many different parks, which is  one of my favorite things about helping out at off-site events.

The morning briefing was held  at the maintainence building, and all hands were there to get "the word". 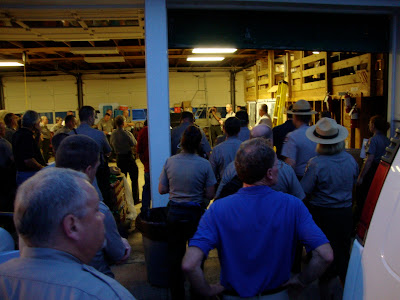 Always on the lookout for personal comfort, I found a pile of folding chairs and propped my old feet up on my pizza and Gatorade-filled cooler.  "Hurry up and wait" ain't all bad if you're prepared (four years in the Navy taught me that). 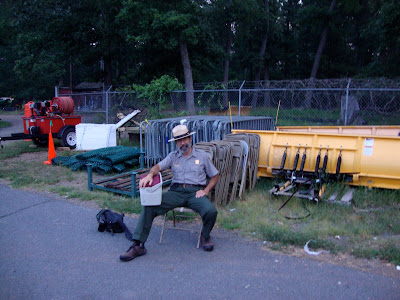 After the briefing we made our way across the highway and up the trail to the park entrance. 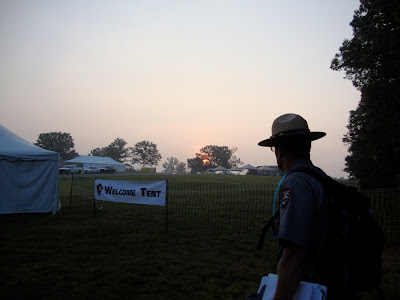 The shimmering sun was already heating the place up, but the building excitement was growing palpable. 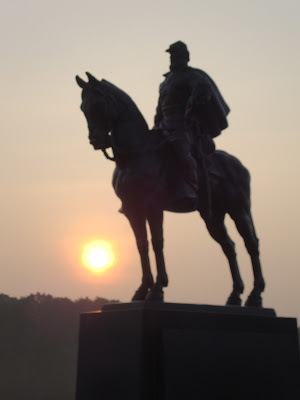 "Stonewall" wasn't the only mounted presence on the field that morning... 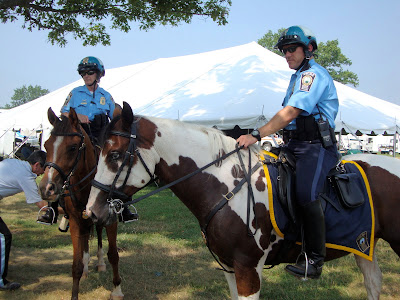 The opening ceremony was scheduled to begin a 9:15 a.m. and everywhere I looked I found preparations under way. 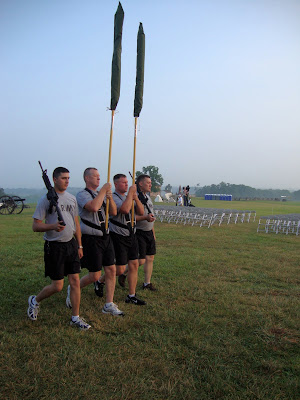 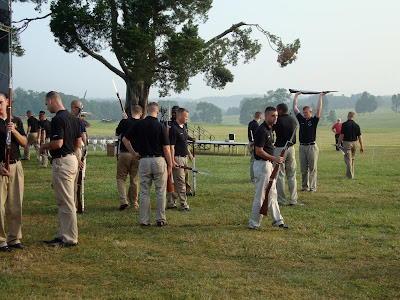 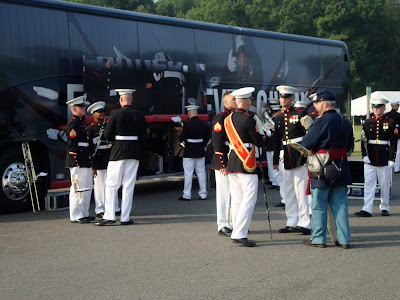 The fourth estate was well represented with journalists being escorted everywhere. 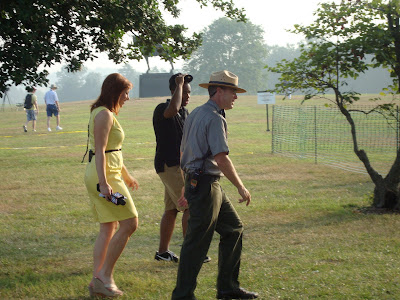 Shortly after the flag went up for the morning... 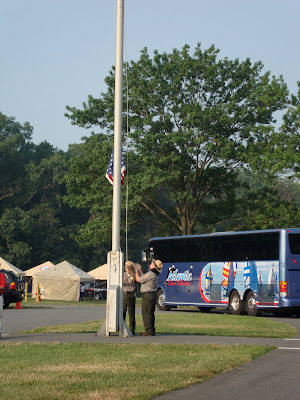 an escorted motorcade roared in and the dignitaries began arriving, in this instance it was... 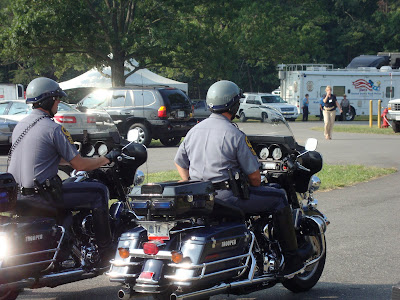 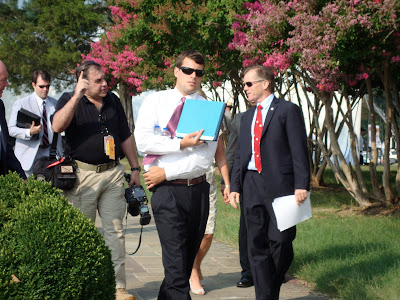 the Governor of Virginia, Bob McDonnell (in red "power tie". 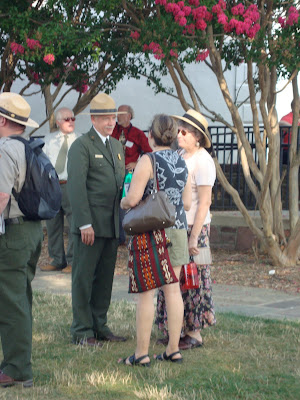 Also in attendance was the Director of the National Park Service, John Jarvis (who seems like a really nice guy by-the-way).
Even "Confederates in the Attic" coverboy Robert Lee Hodge was there. 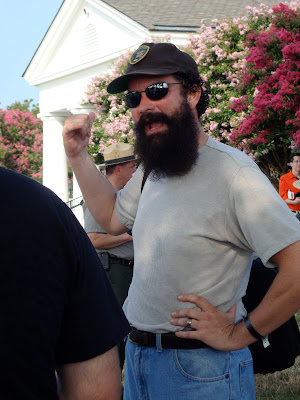 Hodge is a huge supporter of the parks and an ardent preservationist. 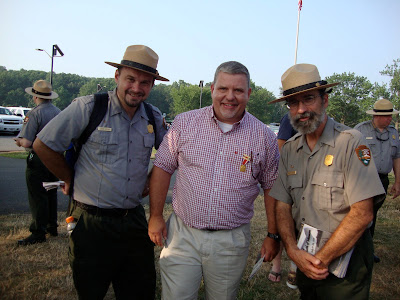 I was a greeter at the bus drop off, handing out brochures, where I met many facebook friends, fellow bloggers, and other old pals.

With a large audience in attendance... 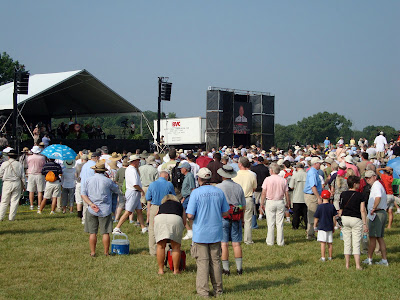 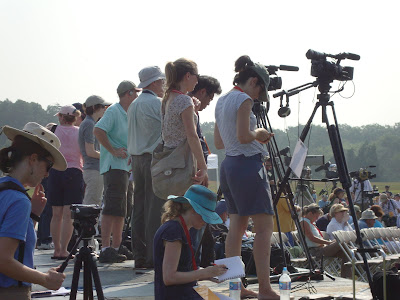 the proceedings got underway which much pomp and circumstance including... 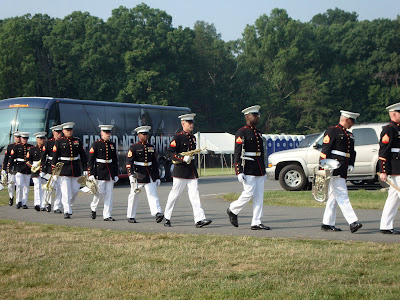 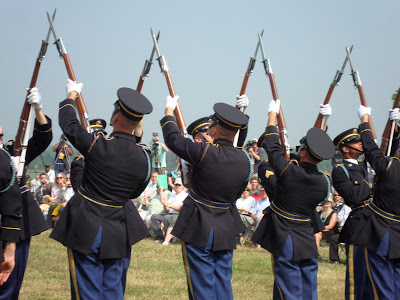 (hit "play" to watch them pleasing the crowd) 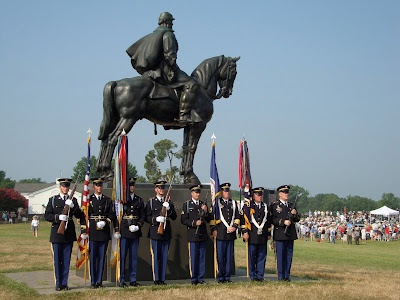 and color guard.
All of the speakers, including the governor... 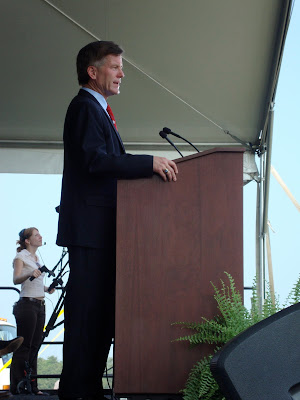 where emphatic in asserting "slavery" as the foundation of the war, and civil rights as the result.  A message I found both uplifting and inspirational.
And with that the Manassass 150th was officially underway. 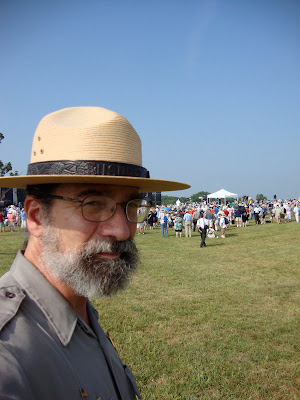 And I got to be a small part of it all.
More tomorrow!
Ranger Mannie
Posted by Mannie Gentile at 8:14 PM

Mannie, we took a tour with you Saturday at Antietam, great job!
ROB

Mannie,
I took your Antietam tour on Thursday July 24th. and enjoyed it very much, especially your description of how most history is presented in 2 dimensions when,in fact history has 3 dimensions. You also seem to take a more charitable view of McClellan than most historians such as Steven Sears who presents Little Mac as mostly a clueless baffoon. I am interested in reading a more favorable treatment of McClellan. If you have any recommendations I would appreciate it. Thanks.
Greg Taylor